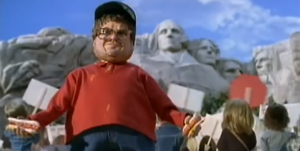 Portly documentarian and full time bridge troll Michael Moore, who convinced swing voters in the rust belt to vote for Trump by accidentally redpilling America, is desperately trying to regain some liberal street cred. If you recall, not only was his four and a half minute speech viewed by millions of people – it was turned into an EPIC TRUMP AD. Just watching it makes me want to vote for Trump all over again.

Moore was also caught on camera dissing another liberal for even considering Hillary in the primaries:

Now, in an attempt to salvage his reputation after accidentally redpilling America, Moore has told his 3 Million+ followers to DISRUPT THE INAUGURATION!

Disrupt the Inauguration. The Majority have spoken – by nearly 2.7 million votes &counting! Silence is not an option https://t.co/HSmP3pREvy

The group which Moore is joining, Disruptj20, plans to “shut down the Inauguration ceremonies” and “paralyze the city itself.” What a bunch of losers.

Are you snowflakes KIDDING ME? Holy participation award batman, accept the results of the election and try again in 4 years. Next time, I suggest the DNC refrain from screwing over Bernie Sanders by literally cheating in the primaries – should he run again. The party of former slave owners, hypocrite arms dealers, and pedophiles should maybe avoid running candidates who take money from Saudi Arabia in exchange for supporting their oil wars.

Consider, democrats, cleaning your own dilapidated house instead of throwing a tantrum and dropping a deuce all over America’s election process.