YouTube has blamed “newer members” of it’s 10,000 person fleet of content moderators for a growing number of recent video takedowns, strikes, and account restrictions taking place across a large cross-section of conservative channels.

YouTube announced the mod team last December, which is tasked with spotting said fake news, along with misleading or extreme content in the wake of a raging debate over the effect of propaganda and inaccurate reporting after Hillary Clinton’s 2016 election loss.

Google issued the following statement in response to the crackdown:

“As we work to hire rapidly and ramp up our policy enforcement teams throughout 2018, newer members may misapply some of our policies resulting in mistaken removals,” wrote a YouTube spokesman in an email. “We’re continuing to enforce our existing policies regarding harmful and dangerous content, they have not changed. We’ll reinstate any videos that were removed in error.”

Some of the banned accounts include:

Those who were issued strikes, partial bans, or temporary suspensions include According to Joe, Blackstone Intelligence, BakedAlaska, InfoWars, Jerome Corsi, Military Arms Channel, and MrLTavern, among many others. –The Outline

Over the last week, The Alex Jones channel was issued two strikes – however the second one was mysteriously removed hours later, maybe due to on overzealous “newer member” who disagreed with Infowars’ politics. And last August, politically incorrect University of Toronto professor Jordan B. Peterson found himself locked out of his YouTube account with no explanation before regaining access.

#Tucker covered the SPLC's secret partnership with Google that conservative content creators on YouTube should be concerned about with @ericschiffer tonight too. pic.twitter.com/yfyP3yvbtg

The Washington Examiner’s Emily Jashinsky noted last year that “the SPLC’s claim to objectivity is nothing less than fraudulent, a reality that informed observers of its practices from both the Left and Right accept.”

“The routine of debunking their supposedly objective classifications occurs like clockwork each time a major outlet makes the mistake of turning to them when reporting on the many conservative thinkers and nonprofits the group absurdly designates as hateful.” –DC

YouTube says the trusted flaggers are equipped with digital tools which allow for the mass flagging of content for review by YouTube personnel. Moreover, the partner groups “act as guides to YouTube’s content monitors,” and engineers who develop algorithms to police more efficiently.

“We work with over 100 organizations as part of our Trusted Flagger program and we value the expertise these organizations bring to flagging content for review. All trusted flaggers attend a YouTube training to learn about our policies and enforcement processes. Videos flagged by trusted flaggers are reviewed by YouTube content moderators according to YouTube’s Community Guidelines. Content flagged by trusted flaggers is not automatically removed or subject to any differential policies than content flagged from other users,”-YouTube Spokesperson

Another “trusted flagger” partner we reported about last year is the Anti-Defamation League (ADL). Originally organized to combat anti-Semitism, the ADL – with it’s Soros-linked National director who last worked in the Obama admin, now spouts hyperbolic propaganda against conservatives, while failing to apply the same nebulous standards to the left. 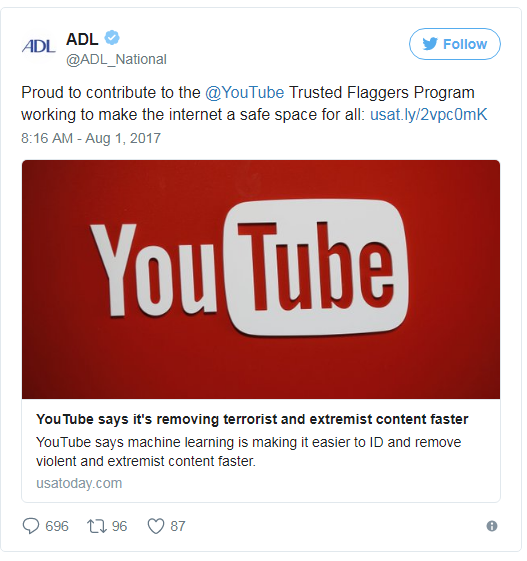 As ZeroHedge reports, YouTube’s mass censorship comes at yet another critical inflection point in the nation’s dialogue over gun control following the Parkland, FL shooting. While gun control advocates have been given a platform on major networks, gun rights activists have been muzzled  – primarily when their opinion has to do with 17-year-old Parkland survivor David Hogg along with several of his classmates who are anti Second Amendment.

Hogg went on CNN and was allowed to call the NRA “child murderers,” (a claim which CNN host Alisyn Camerota told spokeswoman Dana Loesch “I don’t believe you” when it was pointed out), while conservative accounts suggesting Hogg is an actor, or that he was given lines to read for post-shooting interviews, are being censored by left leaning social media platforms.

“We proved, Alisyn Camerota, that you allowed people to call #NRA members and the NRA, child murderers. It’s unacceptable. So hear me, and hear me loud, we are on to you and we will be calling you out every step of the way.”
–@stinchfield1776 cc @CNN @NewDay #MSM pic.twitter.com/o2wm8Gf09O

Many have noted that Parkland 16-year-old pro-gun Parkland shooting survivor Kyle Kashuv has yet to be verified by Twitter, while Hogg and several of his classmates who went on Ellen to advocate for gun control have all been given “blue checks” by the platform.

YouTube also came under fire last week for promoting a clip of Hogg which fueled the “crisis actor” debate, featuring an exchange between Hogg and a Redondo Beach, CA lifeguard from 2017, in which the High School student places his boogie board on a trash can before getting in an altercation with the lifeguard.

After the lifeguard scuffle briefly became YouTube’s No. 1 trending video, it was removed under their harassment and bullying policy and apologized for helping to fuel the “crisis actor” theory.

YouTube’s official policy states that “harmful or dangerous” and “hateful” content may violate its guidelines – and if video creators receive three strikes for violating the rules within three months, YouTube will terminate the account.

If you enjoy the content at iBankCoin, please follow us on Twitter
2018-03-01
zeropointnow
Share
Previous Papa John’s Kicks NFL To The Curb In Major Marketing Overhaul
Next Goldman: Trump Tariffs On Steel And Aluminum Likely Signal NAFTA Exit