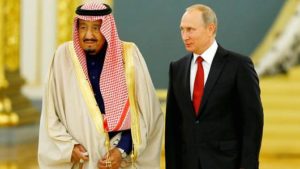 What began as an opportunistic agreement between Russia and Saudi Arabia over oil production has blossomed into a broader relationship that has the potential to further erode the already waning influence the United States has in the Middle East.

Experts have pointed out that Russia now seems to have relationships with most major powers in the region – on both sides of several conflicts; including Iran, Syria, Israel, Hamas and Hezbollah. The U.S., meanwhile, has a tense relationship with Syria and is gearing up for conflict with Iran.

It was the United States, ironically, that drove Russia and Saudi Arabia together in the first place, with the surprising rise of an oil sector that is now producing record-high volumes, last seen in 1970.

“What I think is brilliant about [Russian President Vladimir] Putin is, there was an immediate imperative to get this done because of U.S. production, but I think Putin understood the opportunity there was for Russia to take a role with OPEC,” said RBC global head of commodities strategy, Helima Croft. “He leveraged it to expand Russia’s regional influence.”

Saudi Arabia may believe that Russia could help them with Iran – a longtime ally of the Kremlin – over fears that the Islamic Republic which is already supporting the opposite side in a proxy war in Yemen, will develop nuclear weapons.

“I think the Saudis are in this for geopolitical reasons, and even though Trump went to Saudi Arabia and it’s supposed to be this great relationship, the Saudis are casting around and realizing Russia has taken up a lot of slack for the United States in the Middle East,” said Georgetown University Professor Angela Stent.

RBC’s Croft says the United States has left a power vacuum with its shifting middle east policies. “I think our Iran policy, what happened in Syria, they did not think America was a stalwart. Then you have the Russians. They were willing to be more transactional with them”

“Right now Russia and Saudi Arabia’s relationship is becoming thicker than oil,” Croft said, while in regards to the Saudis, “I think they see themselves as trying to show the Russians they have a better friend in the Middle East (than Iran).”

The seeds for discord in the Middle East were planted by the George W. Bush administration.

“We went into Iraq. It didn’t go the way we thought it was going to go. What it did was allow Iran to come in and increase its influence. For countries that consider Iran to be an existential threat, this was a big mistake because that was the outcome of the war,” Stent said.

“I think it is a strategic alliance when it comes to energy that could well extend to other things. They discussed in the past military matters, purchasing military goods. They talked about investing in Russia. It’s not just purely an energy relationship. It’s more of a strategic political relationship that started as energy reform,” said the director of economics research at the Gulf Research Center in Riyadh, John Sfakianakis.

While an OPEC agreement led by Saudi Arabia and including Russia and other producders is expected to last into 2019, the topic of oil could be up for discussion during the June OPEC meeting. Saudi Energy Minister Khalid Al-Falih says the deal will be reviewed next year for potential changes – however Russian companies have reportedly been eager to increase production.

“Going forward, this arrangement has to hold. It needs to remain for quite some time so oil prices remain at this range of $60ish for some time. It suits everybody, especially the producing countries — $60/$65 is a good price from the $30 we had a couple of years ago. It helps everybody. It keeps the balance of payments in good order. My take is, this arrangement will hold, at least for the rest of the year, and then we’ll see what they do,” said Sfakianakis.

Russia’s warming relationship with the Saudis comes amid Crown Prince Mohammed bin Salman’s push for “Vision 2030,” a comprehensive set of reforms aimed at modernizing Saudi Arabia and diversifying away from the oil business. Bin Salman is making moves into technology, entertainment and tourism – with the upcoming Saudi Aramco IPO to be the cornerstone of the strategy.

Meanwhile US-Russian relations are at a new low – as Special Counsel Robert Mueller continues his investigation into allegations of Russian meddling in the 2016 election. Russia is also under sanctions from both Obama and Trump for its incursion into Ukraine. “[Relations] haven’t been this low since Gorbachev came to power,” said Georgetown’s Stent.

Saudi-US relations, on the other hand, remain warm – as the longtime ally of the United States joined a March 2017 coalition which includes Israel, Egypt and several other countries aimed at wiping out terrorist networks. Bin Salman will be visiting the United States later this month.

“Trump’s first visit and trip abroad was to Saudi Arabia. What he signaled was a strong relationship with Saudi Arabia, and a lot of that was about money,” noted Stent, who pointed out that the trip coincided with a big arms deal announcement.

“If there is a broader and more structured [Mideast] policy, I don’t know what it is,” said Stent, adding that “if the U.S. wants to be more of a player in the region, it has to talk to Iran.”

If you enjoy the content at iBankCoin, please follow us on Twitter
2018-03-05
zeropointnow
Share
Previous Nor’Easter Death Toll Reaches 9; National Guard Deployed; Over 60 Dead In Europe
Next Nearly 200 Cases Of Sexual Abuse Reported At Stanford University