Scaramucci Unloads On “Priebus The Fu**ing Sith Lord” , “Cock Of The Swamp” Bannon In Explosive Interview 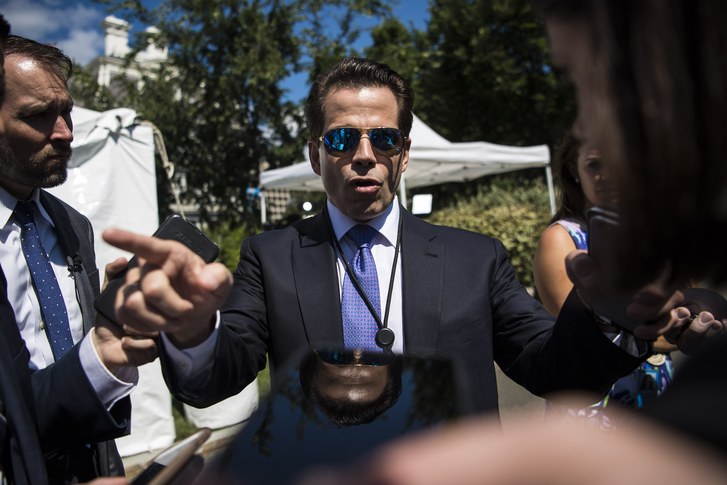 In a series of three “epic” interviews with investigative journalist William D. Cohan, Scaramucci covered a tremendous amount of ground – from his humble beginnings as an Italian kid growing up on Long Island, to his time at Harvard Law, and finally on to Goldman Sachs and the world of hedge funds – which “The Mooch” says pales in comparison to DC politics.

I want you to imagine the worst person that youíve met on Wall Street, the most ruthless and the most diabolical … That’s the best person in Washington. That’s the Eagle Scout of Washington.

In order to take the job, Scaramucci agreed to sell his majority stake in SkyBridge – the New York City-based hedge fund of funds he founded in 2005.

It’s no mystery why Trump wanted Scaramucci around him. Having known each other for many years, “The Mooch” is the consummate Washington outsider; a self-made super high energy Wall St. multi-millionaire, vs the swamp creatures attempting to “handle” Trump – Bannon included as it turns out.

And even though Scaramucci originally backed Jeb! for President, Trump still invited the straight-talking Mooch into his circle of trust – giving him the job of rooting out leaks and stopping them.

Scaramucci delved into his experience with various DC swamp creatures, starting with former White House chief-of-staff Reince Priebus, whom he refers to as “Rancid Penis” – who Mooch refers to as a Jamoke; described in the Urban Dictionary as a “clumsy loser who is incapable of doing normal human tasks.” 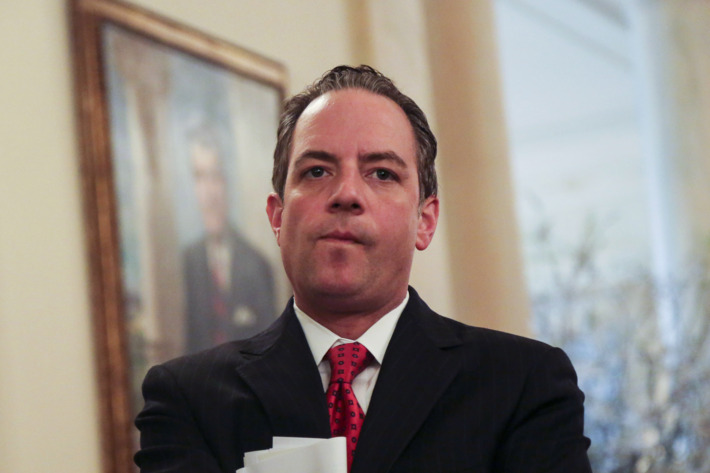 “Rancid Penis, you know, he just cannot believe this. He’s just very jealous, can’t believe I’m this close to Trump. Priebus had the society broken up into “Always Trumpers” and “Never Trumpers,” and he was trying to flood the White House staff, as the chief of staff, with “Never Trumpers,” and trying to figure out ways to blockade, slow down, and keep out, particularly of the White House, the “Trumper-Trumpers.”

Originally tapped to head up the Office of Public Liaison – Valerie Jarrett’s old job under Obama, Scaramucci says Priebus tried to talk him out of the West Wing:

So, when the president turned to me and said he wanted to give me the O.P.L. job, I got a call from Reince: Don’t take the O.P.L. job. You can be the finance director for the R.N.C. Stay at your company. Blah, blah, blah. I said, No, no, no. Iím gonna take the O.P.L. job. I want to work with the president.” How many times in my life am I gonna be able to work in the White House and work for the president of the United States? And Reince’s answer was, “Actually, Iím gonna do everything I can [to help you]. He did say this because he’s a Washingtonian. Thatís what they do to you, they say, “golly gee” to your face and they act like Richie Cunningham to your face. Theyíre Richie Cunningham and theyíre Opie from The Andy Griffith Show, but they’re the fucking Sith Lord behind your back. Theyíre hitting you with a lightsaber behind your back.” In fact, according to Scaramucci, Priebus disinvited Scaramucciís parents from the January 22 swearing-in ceremony for the new White House staff. –Vanity Fair

Scaramucci says Priebus jumped all over his decision to sell his stake in his hedge fund, SkyBridge, to Chinese conglomerate HNA Group Co. Ltd. “He gets this whole nefarious research packet over to The New York Times. They love this stuff. Boom: HNA is this mysterious, nefarious company.”

Cock of the Swamp Bannon 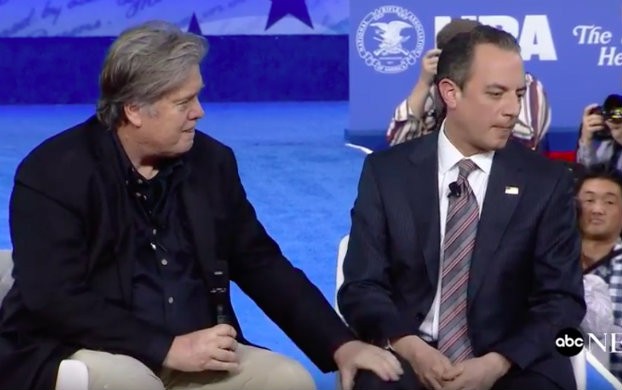 In order to get rid of Scaramucci, Priebus reportedly enlisted Steve Bannon – another Jamoke – enticing him with a seat on the National Security Council (which lasted approximately three months before National Security adviser H.R. McMaster gave him the boot).

“Then he goes to [Steve] Bannon [then Trump’s chief strategist] and he says, I’m gonna get you on the National Security Council if that’s where you want to go, but youíve got to join forces with me and take out Scaramucci.

Scaramucci was shocked at Bannon’s betrayal. ìI helped Bannon through the three months that he was on the campaign, and we had a good relationship. But Bannon turns on me, because Bannon is ultimately railing against the swamp, but he’s actually a cock of the swamp.”

Bannon and Priebus eventually recommended Scaramucci to the role of US ambassador to the Organization for Economic Cooperation and Development, in Paris – a position which included a 17-room apartment in Paris to move to with his family. Unfortunately, that would require a lengthy Senate approval, so in the meantime Priebus found Scaramucci a desk job at the Export-Import bank in Washington.

While Priebus and Bannon successfully blocked Scaramucci from heading up the Office of Public Liaison, Ivanka Trump called The Mooch and set up a meeting – the topic being the White House’s copious leaks to the press, along with how to manage Trump’s image.  “So I go over that day,” he said. “I go see Ivanka. They clearly don’t want Priebus to know that Iím coming. I go through the door. There’s a study off the Oval Office. Iím sitting there with the president. Ivankaís open with me. She says, “We have to re-structure.” The meeting would lead to Scaramucci’s appointment as the new White House director of communications.

After Scaramucci accepted the job, Priebus and Bannon took it upon themselves to try and talk him out of it – peppering Scaramucci with a string of desperate phone calls and text messages. When Bannon was finally able to get through, he told Scaramucci that he wasn’t fit for the job.

“You want to know what your chances are?” I said, “What are my chances, Stephen?” [Replied Bannon]: “Zero! You got that, man? Zero. You got it? Zero.” I said, “Zero, O.K., I didnít realize that the word “president” was in front of your last name, Stephen…”

The next day, Scaramucci headed over to the White House where Trump would announce his decision to name him comms director – with instructions to his senior staff that Scaramucci was to report directly to him.

“He comes back and he announces that heís resigned, and I said, “O.K., thatís great.” Trump’s irritated. He says, “These guys are unbelievable. I gave them the job of a lifetime, theyíre letting everybody down. Theyíre letting me down.” (Spicer could not be reached for comment.)”

After a leak about Trump’s dinner plans was tweeted by Ryan Lizza, then-Washington correspondent for The New Yorker (who was subsequently fired for sexual misconduct), Scaramucci called Lizza to try and find out who his source was – dropping copious F-bombs, making jokes about murdering leakers, and referring to Steve Bannon in not-so kind terms.

Much to The Mooch’s chagrin, the profanity-laced conversation was taped – which Lizza promptly turned into a profanity-laced New Yorker article which would ultimately cost Mooch the dream job that he sold out of his hedge fund to take. Lizza’s article includes such gems as “I’m not Steve Bannon, Iím not trying to suck my own cock,” and “What I want to do is I want to fucking kill all the leakers and I want to get the Presidentís agenda on track so we can succeed for the American people.”

Two days later – and a half hour or so after Reince Priebus was pushed out of his post as Chief-of-Staff and replaced by John Kelly, the New York Post ran an article stating that Scaramucci’s wife was divorcing him because she hates Trump. 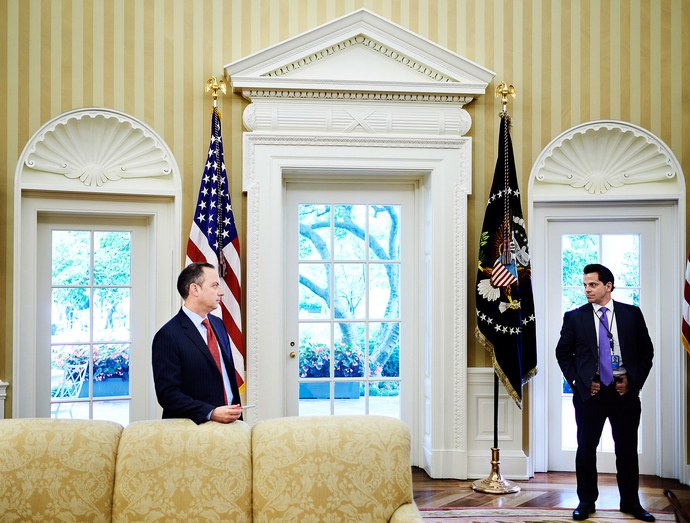 Two days after that – and following an effort by Bannon to undermine Scaramucci by convincing the evangelical Freedom Caucus to complain to Trump over the profanity-laced Lizza phone call, John Kelly called The Mooch into his office and fired him, to which Scaramucci replied “Wow, that’s super disappointing.”

Scaramucci notes that his firing at the hand of Kelly did not leak to the press. Moreover, Kelly even allowed Scaramucci to leave the White House through the East Wing exit near the Treasury to avoid cameras.

The Mooch reflected on his very brief time at the White House;

“You want to talk about the education of Anthony Scaramucci? I learned that the swamp is probably a gold-plated cesspool with no drain. You understand what Iím saying? You canít drain the fucking thing. Itís a gold-plated cesspool, and you got cesspool operators in there that know how to slow down disruptors like Donald Trump.”

On Trump, Scaramucci says that “one Trump tweet more than any other sums up the man: “My button is bigger than your button.” He said, “If you really know the guy and you know how he’s raking it over everybody and breaking everybody’s balls, it’s like laugh-out-loud funny.”

If you enjoy the content at iBankCoin, please follow us on Twitter
2018-02-02
zeropointnow
Share
Previous Check Out Amazon’s New “Rainforest” In The Middle Of Rainy Seattle
Next Wells Fargo Plunges AH As Fed Orders Bank To “Halt Growth” Over Compliance Issues