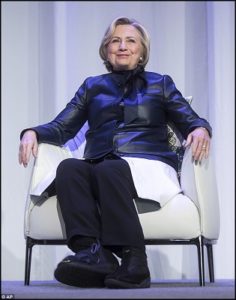 The former Secretary of State was spotted wearing a black surgical boot during a Vancouver stop along her book tour, two months after she says she took a tumble down some stairs in high heels while holding a cup of coffee.

Clinton ambled onto the stage in some sort of black outfit to promote her book What Happened – which details why her election loss is everyone’s fault but hers, when onlookers were confronted with the orthopedic device she’s worn since October.

While recounting her harrowing incident, Clinton said ‘I was running down the stairs in heels with a cup of coffee in hand, I was talking over my shoulder and my heel caught and I fell backwards. ‘I tried to get up and it really hurt. I’ve broken my toe.”

“If your toe is crooked after the injury, the bone may be out of place… …It can take 4 to 6 weeks for complete healing,” according to medlineplus.gov.

Yet, two months later to the day Clinton definitely fell and broke her toe, her foot still seems to be bothering her. It’s possible that if the toe required surgery to reset, it could have extended the healing process.

Clinton’s toe is the latest in a long line of health issues. While her physician Lisa Bardack said Clinton was “fit as a fiddle” during the 2016 election, however her spastic head bobbing, required assistance up stairs, mysterious (epi)’pen’ shadow doctor, special glasses, and fainting spell on September 11th, 2016 before being hoisted into a van like a side of beef suggest otherwise.

And what was that weird metal thing that fell down Hillary’s pant leg while she was passing out?

Whatever’s going on with Hillary’s toe, requiring a boot to Position her foot as she travels around the Globe to keep her recovery Tracking along is absolutely sad!

If you enjoy the content at iBankCoin, please follow us on Twitter
2017-12-14
zeropointnow
Share
Previous Teva Jumps 18 Percent In Early Trade After Cutting 25% Of Workforce, Eliminating Dividend
Next New Sexual Assault Claims On Deck: “The House Is Going To Be Rocked In The Coming 72 Hours”