Shares of Israeli generic drugmaker Teva Pharmaceutical ($TEVA) spiked over 18% in early morning trade on news that they are eliminating 25% of global workforce, suspending their dividend, and warned of “downward pressure on the top line.” The stock is currently up around 13%. 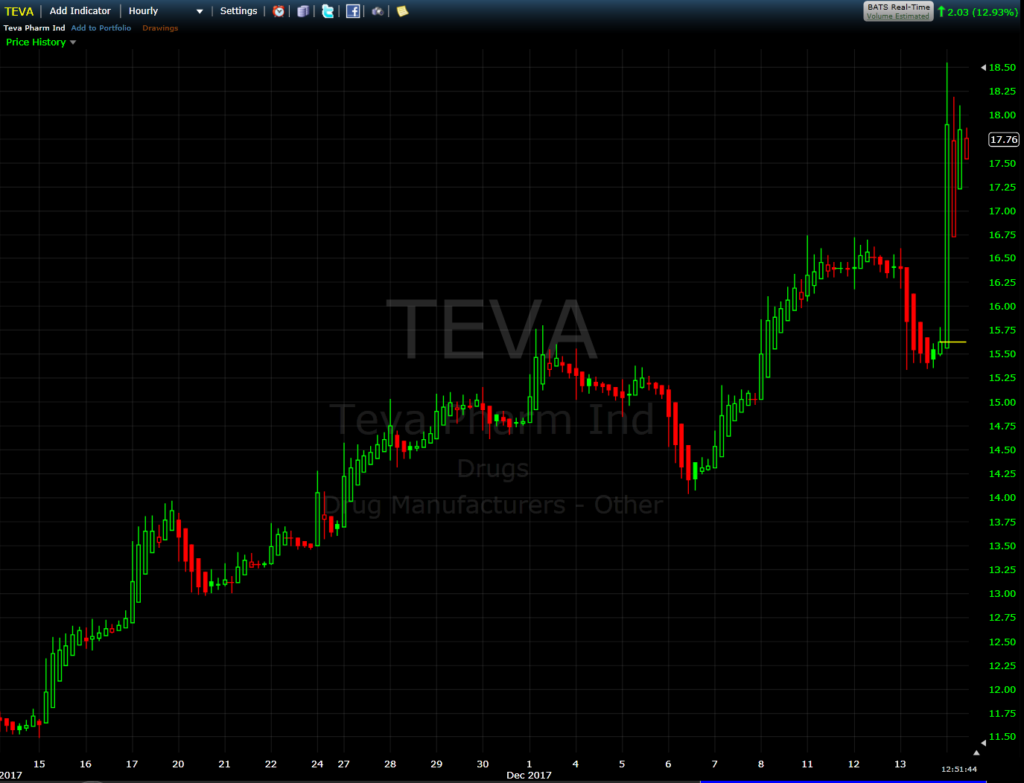 Teva Pharmaceutical Industries Ltd. will relocate or shut down most of its manufacturing operations in Israel, according to a document reviewed by Calcalist and people familiar with the matter who spoke on condition of anonymity. The company’s plans in Israel are part of the wider global restructuring strategy announced by the company late November. The company intends to implement the plan in the next few months, in the hope of presenting significant cost cuts in its earnings report for the first quarter of 2018, according to the document.

Following a late-night board meeting, the company has decided to let go over half of its Israeli workforce, cutting 3,300 jobs out of 6,430 in the country. The company intends to do away with most of its domestic manufacturing activities, shutting and selling entire sites, and drastically reducing the size of operations in remaining sites.

The move, according to the WSJ, is meant to significantly cut costs so they can pay down debt.

The world’s largest seller of generic drugs has been under intense pressure from other drugmakers for their blockbuster multiple-sclerosis drug, leading to competitive price declines and sagging sales. The company’s restructuring will take two years and aims to cut $3 billion in costs by the end of 2019, according to the Thursday announcement.

CEO Kåre Schultz, who has been in the role since November 1, said that there is no other option in a memo to employees:

“Making workforce reductions of this magnitude is difficult,” Mr. Schultz wrote in a memo to employees.

“However, there is no alternative to these drastic steps in the current situation.”

A photoshopped image of new Teva CEO Kåre Schultz has been making the rounds of Mr. Schultz is dressed as a “White Walker,” an undead ice creature from HBO’s popular fantasy series Game of Thrones, with the caption “Winter is coming.”

Unfortunately, nobody has posted it online yet…

If you enjoy the content at iBankCoin, please follow us on Twitter
2017-12-14
zeropointnow
Share
Previous Grassley Fires Off Scorching Letter To DOJ After Anti-Trump Texts Reveal Burner Phone, “Insurance Policy”
Next Why Is Hillary Clinton Still Wearing Surgical Boot Two Months After Breaking Her Toe?