New Sexual Assault Claims On Deck: “The House Is Going To Be Rocked In The Coming 72 Hours” 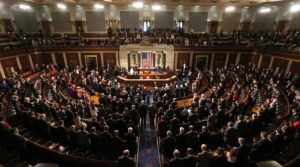 The Daily Caller’s Luke Rosiak says that within 72 hours, “The House Is Going To Be Rocked” with a new bombshell which he says “will see the resignation of more than a dozen House members over harassment and secret settlements, and soon.”

Rosiak, who has earned a large following as one of the leading journalists cataloging the Awan brothers scandal, does not typically engage in hyperbole – so when he posted the following tweets, people took notice:

Congress' human resources scandal is just getting started. I anticipate we will see the resignation of more than a dozen House members over harassment and secret settlements, and soon.

Mark my words, the House is going to be rocked in the coming 72 hours. Tick Tock. https://t.co/NeBl9KvWtz

Rosiak’s last “Tick Tock” on December 4th telling people to “Stay tuned for news of another secret House settlement, related to an allegation of sexual assault” was followed up with a revelation about a settlement brokered by Rep. Gregory Meels in 2006 over allegations that he fired a staffer in retaliation for a claim she made against a campaign contributor.

Andrea Payne, then a congressional aide in Meeks’ Queens office, filed a complaint with the Office of Compliance, and Meeks fired her weeks later. He admitted that the cause of her termination did not have to do with the quality of Payne’s work.

“This is an action to recover for damages sustained by plaintiff when Representative Meeks violated her Constitutional rights by retaliating against her, and ultimately terminating her employment, because of her sexual assault lawsuit,” Payne’s attorneys wrote.

The attorney for disgraced Rep. John Conyers’ hinted that there are “a lot” of potential claims out there, he wrote prior to Conyers’ resignation:

“If people were required to resign over allegations, a lot of people would be out of work in this country including many members of the House, Senate and even the president.”

If you enjoy the content at iBankCoin, please follow us on Twitter
2017-12-15
zeropointnow
Share
Previous Why Is Hillary Clinton Still Wearing Surgical Boot Two Months After Breaking Her Toe?
Next Chris Matthews Staffer Paid Off After Sexual Harassment Complaint, Matthews Reprimanded