Chuck Schumer and John McCain shared fist pumps of victory after the ‘Skinny’ repeal of Obamacare narrowly failed with a vote of 49-51. McCain – the maverick who heroically flew back to Washington D.C. after immediately recovering from brain cancer surgery, teamed up with Republicans Susan Collins and Lisa Murkowski to join Democrats in opposing the latest attempt to triage the actively imploding Obamacare debacle.

Collins voted no first, then Murkowski, followed by McCain, who came to the well of the Senate and gave a thumbs down, dooming the repeal bill to loud gasps, mostly from the Democratic side of the aisle. Republican leaders stood together looking grim as their back-up repeal plan appeared to collapse. –Bloomberg

Senate Majority Leader Mitch McConnell described the bill’s failure as a “disappointing moment,” while top Democrat Chuck Schumer said he and the rest of the his party were relieved that millions of people would get to keep their healthcare.

President Trump weighed in, reminding people of the impending implosion of the illegally propped-up Obamacare scheme.

3 Republicans and 48 Democrats let the American people down. As I said from the beginning, let ObamaCare implode, then deal. Watch!

Mitch McConnell’s ‘stripped down’ compromise sought to strike a balance between a total repeal of Obamacare sought by conservatives, and concerns by liberals over a projected 16 million Americans who would lose their health insurance or see premiums rise 20% by 2026. 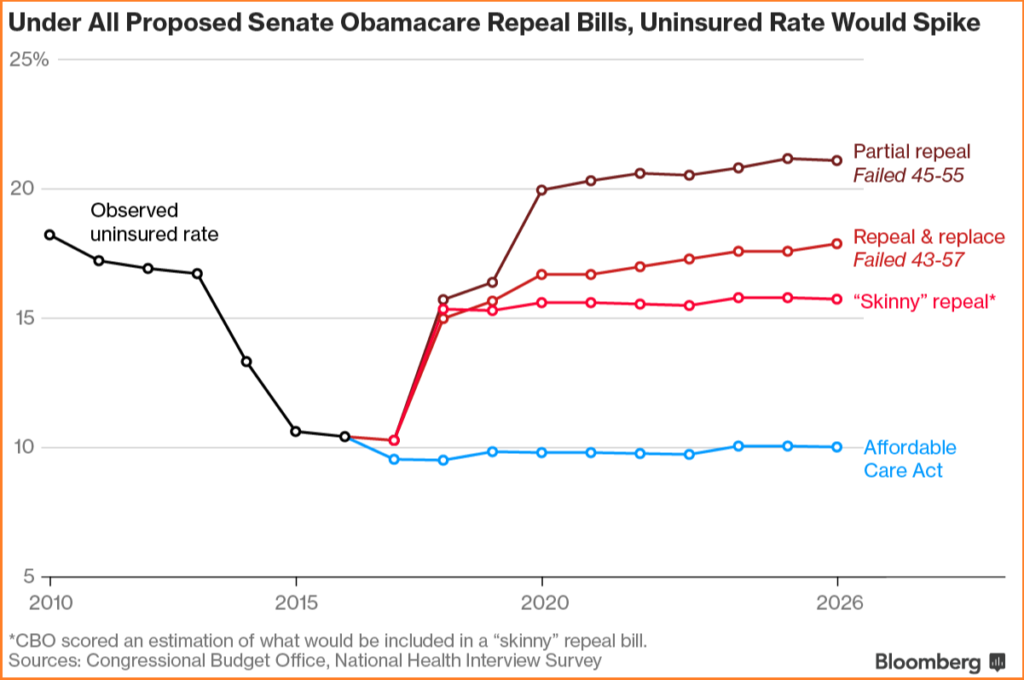 Mitch McConnell gave a sullen concession speech – tossing the ball in the Democrats’ court, and adding that a public bailout of insurance companies wasn’t a tenable solution:

Now, I imagine many of our colleagues on the other side are celebrating. Probably pretty happy about all this. But the American people are hurting and they need relief. Our friends on the other side decided early on they didn’t want to engage with us, in a serious way, to help those suffering under Obamacare.

So now I think it’s appropriate to ask, what are their ideas?

Bailing out insurance companies with no thought of any kind of reform is not something I want to be a part of.

After going only so far as to say Obamacare ‘needs improvement,’ Chuck Schumer – who suppressed a laugh as he gave a nod to John McCain and Orrin Hatch (who shared a moment after the vote), and suggested that the bill could be passed if certain conditions are met.

I have no clue what it means but here's an interaction between McCain and Schumer that just happened on the floor. pic.twitter.com/6fcLkcgQTr

At the end of March, Trump let people know what he was going to do when Obamacare inevitably implodes; a total reboot.

ObamaCare will explode and we will all get together and piece together a great healthcare plan for THE PEOPLE. Do not worry!

Last but not least on this rollercoaster of a charade – Senator Tom Scott was the victim a vicious notebook attack by the violent media:

On the Senate floor, @SenatorTimScott gets hit by a reporters notebook that feel from the gallery above: pic.twitter.com/qmpyX4ZEdA

Get the popcorn, the swamp just claimed a win in what’s going to be a long and interesting cleanup when Obamacare implodes.

If you enjoy the content at iBankCoin, please follow us on Twitter
2017-07-28
zeropointnow
Share
Previous Scaramucci UNLOADS On Leaky Priebus, Bannon And Swamp Creatures – “They’re Going To Have To Go F*ck Themselves”
Next Imran Awan Subscribed To Pedo-Centric YouTube Channel Exposed By Tosh.0