Scaramucci UNLOADS On Leaky Priebus, Bannon And Swamp Creatures – “They’re Going To Have To Go F*ck Themselves” 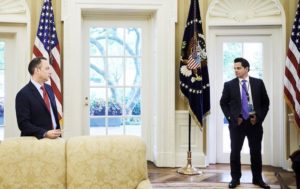 Following last night’s Twitter firestorm ignited by White House Communications Director Anthony Scaramucci in which he appeared to threaten Trump’s chief of staff Reince Priebus for leaking Trump’s dinner plans to a journalist, The New Yorker‘s Ryan Lizza penned an article with the rest of the story – which begins “On Wednesday night, I received a phone call from Anthony Scaramucci, the new White House communications director.  He wasn’t happy. ”

“Mooch” got right to the point, asking Lizza “Who leaked that to you?” When Lizza declined to reveal his source, Scaramucci told The New Yorker contributor “This is going to get cleaned up very shortly, O.K.? Because I nailed these guys. I’ve got digital fingerprints on everything they’ve done through the F.B.I. and the fucking Department of Justice,” adding “What I want to do is I want to fucking kill all the leakers and I want to get the President’s agenda on track so we can succeed for the American people.”

The WH Comms Director then set his sights on Trump’s Chief of Staff and former chairman of the RNC, Reince Priebus – who “cock blocked” his appointment for six months, according to Scaramucci:

“They’ll all be fired by me,” he said. “I fired one guy the other day. I have three to four people I’ll fire tomorrow. I’ll get to the person who leaked that to you. Reince Priebus—if you want to leak something—he’ll be asked to resign very shortly.”

Mr. Scaramucci was also incensed over a Politico report on Wednesday which disclosed his net worth and other financial information – initially claiming it was a ‘felony’ leak in his now-deleted tweet threatening Priebus – only to find out that it was publicly available information after his phone call with Lizza.

Scaramucci told Lizza during the call: “I’ve done nothing wrong on my financial disclosures, so they’re going to have to go fuck themselves.”

Per the New Yorker

“Scaramucci said he had to get going. “Yeah, let me go, though, because I’ve gotta start tweeting some shit to make this guy crazy.”

Minutes later, he tweeted, “In light of the leak of my financial info which is a felony. I will be contacting @FBI and the @TheJusticeDept #swamp @Reince45.” With the addition of Priebus’s Twitter handle, he was making public what he had just told me: that he believed Priebus was leaking information about him. The tweet quickly went viral.”

Per Lizza: “Scaramucci also told me that, unlike other senior officials, he had no interest in media attention. “I’m not Steve Bannon, I’m not trying to suck my own cock,”he said, speaking of Trump’s chief strategist. “I’m not trying to build my own brand off the fucking strength of the President. I’m here to serve the country.” (Bannon declined to comment.)

After word of Scaramucci’s Twitter meltdown and phone call with Lizza, he tweeted this an hour ago:

I sometimes use colorful language. I will refrain in this arena but not give up the passionate fight for @realDonaldTrump's agenda. #MAGA

I don’t know about you, but I’m entertained as fuck.