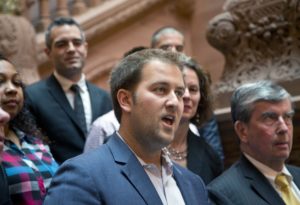 Last Tuesday, Uber admitted to underpaying NY drivers by tens of millions of dollars over 2.5 years – the second such admission in three months. Dicks!

Uber said it had mistakenly underpaid New York drivers since late 2014, an accounting error that will likely cost it tens of millions of dollars. The company said it would refund the money plus interest, which comes to an average of about $900 per driver. It didn’t say how the error occurred or who was responsible. –wsj

In the wake of last week’s embarrassing announcement, the company shitcanned their New York general manager Josh Mohrer – who is leaving to become managing director of Tusk Ventures, which according to the WSJ is “a consulting firm that for years has helped Uber battle regulators, and which is also an investor in Uber.”

Is that a step down?

Now let’s think about the future. Uber is definitely planning on deploying fleets of driverless cars as soon as possible – allegedly even stealing trade secrets from Google. Instead of overpaying pesky humans by tens of millions – they’ll be paying robots nothing.

That, of course, is how the robot uprising begins. Thanks Uber.

If you enjoy the content at iBankCoin, please follow us on Twitter
2017-05-30
zeropointnow
Share
Previous Hillary Emerges From Crypt, Dons Anti-Seizure Glasses For Cloudy Memorial Day Parade
Next El Salvador Freaks Out As Trump Deports Hundreds Of MS-13 Gang Members