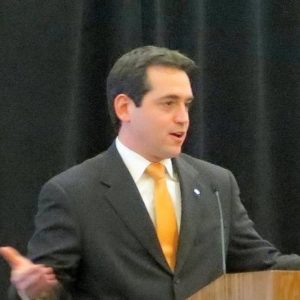 Texas state Rep. Matt Rinaldi (R-Irving) was assaulted and physically threatened by Democrat colleagues after the Republican lawmaker called ICE on protesters opposed to the state’s tough new law on sanctuary cities. According to Rinaldi, several people were carrying signs which read “I am illegal and here to stay.”

Hispanic legislators nearby were enraged by Rinaldi’s call to ICE – who Rinaldi said “threatened my life on the House floor.”

“We called law enforcement trying to incentivize them to leave the House,” Rinaldi told the Texas Tribune. “They were disrupting. They were breaking the law.”

“I was pushed, jostled and someone threatened to kill me,” Rinaldi said. “It was basically just bullying.”

Nevárez said in an interview with the Tribune that he put his hands on Rinaldi and told him to take his argument outside the House chamber. “But was I going to shoot the guy? No,” he said. –Texas Tribune

A statement regarding today. pic.twitter.com/M0BcBXa43P

“For us, this looks like the fabric of Texas, and this looks like Texans exercising their First Amendment right against a law that they perceive to be hateful and unjust,” Rep. Rafael Anchía (D), chairman of the caucus, said about the diverse group of protesters. “That is a cornerstone of our democracy.”

“To others, I guess it appeared like a group of undocumented persons in the gallery somehow doing something unlawful who need to be deported. Those were some of the words used by Representative Rinaldi,” Anchía continued.