In an action encouraged by over 100 “bipartisan leaders from across the political spectrum,” including Nancy Pelosi and Orrin Hatch, President Trump commuted the 27-year prison sentence of the former CEO of the nation’s largest kosher meat-processing company on Wednesday, according to the White House. Sholom Rubashkin, 57, served 8 years in a New York prison for 86 counts of fraud; including bank fraud, mail and wire fraud, and money laundering. It’s nice to know the DNC and GOP can unite behind something these days.

Shalom was the head of Iowa slaughterhouse, Agriprocessors, which grew to become the nation’s largest kosher slaughterhouse and meat packing plant – and the only foreign slaughterhouse allowed to export beef to Israel. Between 1997 and 2002, sales grew from $80 million to $180 million.

On May 12, 2008, the FBI and Homeland Security conducted the largest workplace raid in the history of the United States against Agriprocessors, arresting 389 illegal immigrants. Two Federal trials were launched for fraud and immigration violations, while Rubashkin was acquitted in a state trial over 67 child labor violations.

“For years, Agriprocessors used a broken immigration system to exploit workers and to drive down working conditions, and it appears it’s finally caught up,” said Scott Frotman, spokesman for the United Food and Commercial Workers union, which had been organizing at the plant since 2005. “It really does appear the Rubashkins developed their business plan directly from Upton Sinclair’s ‘The Jungle.’ I think this shows this behavior was systemic throughout the company’s operation.” –Washington Post

Agriprocessors was fined $10 million for wage violations in October, 2008. The next day Rubashkin was arrested at his Postville home on charges of fraudulently diverting millions of dollars from a collateral loan account to accounts receivable. Rubashkin also ordered computer records scrubbed to hide the transactions. He was denied bail in 2008 after a federal judge determined that he posed a flight risk due Israel’s “Law of Return.” “I was stunned. So I guess if you’re Jewish, you get locked up with greater frequency…” said Rubashkin’s bail attorney, former top DHS lawyer Baruch Weiss. Rubashkin was finally released on $500,000 bail in January, 2009 by District Court Judge Linda Reade.

The White House explained that the commutation was “an action encouraged by bipartisan leaders from across the political spectrum, from Nancy Pelosi to Orrin Hatch,” adding that many have called the 27 year sentence handed down to the father of 10 “excessive in light of its disparity with sentences imposed for similar crimes.”

“A bipartisan group of more than 100 former high-ranking and distinguished Department of Justice (DOJ) officials, prosecutors, judges, and legal scholars have expressed concerns about the evidentiary proceedings in Mr. Rubashkin’s case and the severity of his sentence. Additionally, more than 30 current Members of Congress have written letters expressing support for review of Mr. Rubashkin’s case.

Upon hearing the news of his son’s commutation, Rubashkin’s father and founder of Agriprocessors, Aaron Rubashkin, did a dance – along with the entire headquarters of Chabad International:

Dancing and celebration at Chabad International Headquarters "770" as they get word of the President's decision to commuted the sentence of Shalom Mordechai Rubashkin. pic.twitter.com/DMHAnGzWNv 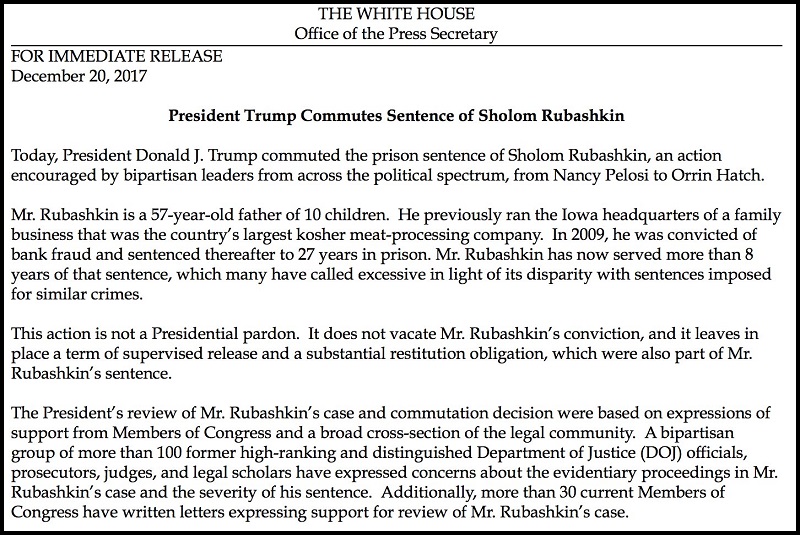 If you enjoy the content at iBankCoin, please follow us on Twitter
2017-12-22
zeropointnow
Share
Previous Rosie O’Donnell Gets Called Out By Ben Shapiro Over $2 Million Bribe, Tells Him To “Suck My D*ck”
Next “It’s Time For Bob Mueller To Put Up Or Shut Up” Says House Committee Member Matt Gaetz In Explosive Interivew (VIDEO)