The Washington Post has confirmed that the man taken into custody after ramming a crowd of counter-rally protesters in Charlottesville, VA is 20 year old registered Republican James Alex Fields of Ohio:

The Dodge Challenger is registered to 20-year-old James Alex Fields of Ohio, according to vehicle registration records reviewed by The Washington Post. Albemarle-Charlottesville Regional Jail Superintendent Martin Kumer told The Post that a man with the same name and age was booked Saturday on suspicion of second-degree murder, malicious wounding, failure to stop for an accident involving a death, and hit and run. Kumer said Fields is currently being held without bail.

Angela Taylor, a spokeswoman for UVA Medical Center, said 19 others had been brought to the hospital in the early afternoon after the car crash in a pedestrian mall packed with people, many of them counterprotesters. Five were in critical condition as of Saturday evening. Another 14 people were hurt in street brawls, city officials confirmed.

Earlier, police had evacuated a downtown park as rallygoers and counterprotesters traded blows and hurled bottles and chemical irritants at one another, putting an end to the noon rally before it officially began.

Despite the decision to quash the rally, clashes continued on side streets and throughout the downtown. In the early afternoon, three cars slammed into each other at the pedestrian mall at Water and Fourth Streets, sending bystanders running and screaming.

What we know about Fields:

James Alex Fields Jr. (born April 26, 1997) is a resident of Maumee, Ohio​. He is registered to vote in Lucas County, Ohio​ and put his party affiliation as Republican.[1]​ In addition, James is registered as the owner of a Gray 2010 Dodge Challenger​ that ran into protesters at the Unite the Right​ rally.[2]​ 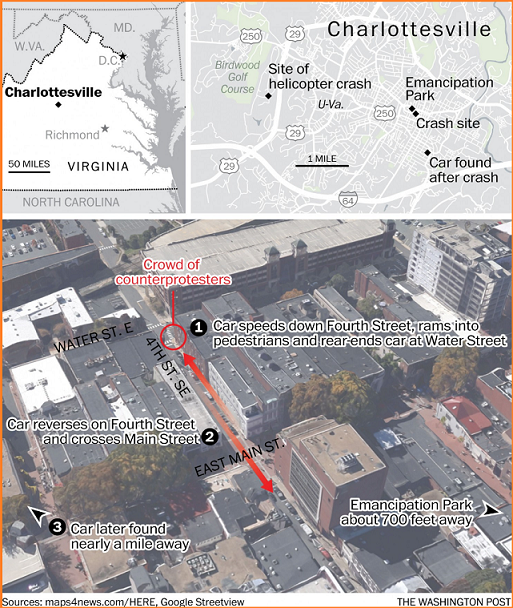 Per the Washington Examiner:

Multiple Republican senators called the car crash in Charlottesville, Va., that left one dead Saturday an incident of domestic terrorism and at least one criticized President Trump for not doing the same.

Colorado Sen. Cory Gardner called out Trump for saying “many sides” are responsible for the violence in Charlottesville, Va., that left one dead and 19 injured after a car drove into a crowd.

Gardner, R-Colo., tweeted Trump should call out what happened and who was responsible by name instead of hiding behind rhetoric that makes the victims seem responsible.

“Praying for those hurt & killed today in Charlottesville. This is nothing short of domestic terrorism & should be named as such,” Gardner tweeted.

“Mr. President – we must call evil by its name. These were white supremacists and this was domestic terrorism.”

Praying for those hurt & killed today in Charlottesville. This is nothing short of domestic terrorism & should be named as such.

Very important for the nation to hear @potus describe events in #Charlottesville for what they are, a terror attack by #whitesupremacists

We should call evil by its name. My brother didn't give his life fighting Hitler for Nazi ideas to go unchallenged here at home. -OGH