One Dead, 19 Injured After Car Plows Into Crowd Of Protesters In Charlottesville [updated]

JUST IN: Virginia Gov. Terry McAuliffe says there were 3 fatalities in Charlottesville https://t.co/38mcNRk9Np

UPDATE: Charlottesville city says that two deaths were in helicopter crash; one was in crash being investigated as vehicular homicide 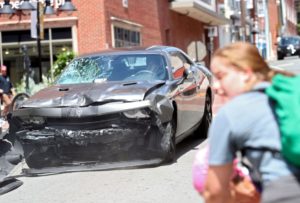 A man driving a 2010 Dodge Challenger rammed into a group of liberal counter-protesters demonstrating against a white nationalist rally in Charlottesville, VA, Saturday afternoon – killing one and injuring 19. After plowing into the crowd, the car reversed and rapidly sped away.

The driver has been apprehended by police and his identity has not been released.

Police say the car was covered in dents prior to the incident, according to journalist Taylor Lorenz of Mic, adding  “If you watch the earlier part of my stream you can see anti-right wing chasing after a Lexus and throwing rocks, bottles, a shoe. This car was not the one that mowed people down. That was a differ grey car.”

While early reports said that the driver was afraid and trying to flee the mob, footage shows the car purposefully accelerating into the crowd from a distance.

Video of the incident (photos at bottom)

Another angle of the car running over protestors in #Charlottesville. This has no place in America! pic.twitter.com/YFM9KAGu1g

The moment when a vehicle hits anti- alt right activists in #charlottesville. It is a hit and run. The vehicle quickly leaves the scene pic.twitter.com/cW7K6N51gc

The driver was taken into police custody right after the incident. Police say the car was covered in dents prior and apparently hit by a bat

I'm at the police station now interviewing officers and other witnesses. Every witness here claims the act was deliberate

"We condemn in the possible strongest terms this display of hatred, bigotry and violence," Pres. Trump says. https://t.co/tZfyR3BB6h pic.twitter.com/ZqWGyNR8Mu

“I have been in contact with our Department of Justice agents assisting at the scene and state officials. We will continue to support our state and local officers on the ground in any way possible. We stand united behind the president in condemning the violence in Charlottesville and any message of hate and intolerance. This kind of violence is totally contrary to American values and can never be tolerated. I want to thank all law enforcement personnel in the area for their commitment to protecting this community and the rule of law.”

Photos of the scene