Shares of Snap, Inc. ($SNAP) cratered to fresh lows after a week of carnage, coinciding with the expiration of the employee IPO lockup period, and a disappointing rejection from inclusion into the S&P 500 index due to new rules which exclude companies with multiple share class structures. Sad! 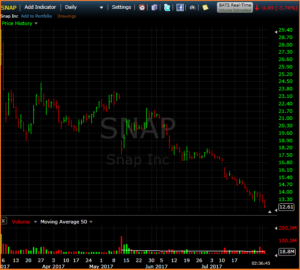 The first wave of insiders began selling locked up shares on Monday, with a broad-scale expiration kicking into gear August 14 – however as Tech Crunch points out, “for many employees who joined in 2015 or later, their shares are underwater and so it wouldn’t make sense for them to sell yet.”

Snap shares have fallen over 43 percent in the last three months, hitting an all time low of $12.52 today – 26% below it’s March IPO price.

Upcoming earnings may provide a respite

Snap will get a chance to prove investors wrong in its quarterly earnings report this month, when Wall Street analysts say they will look for signs that Snap’s user growth is accelerating even as Instagram has users hooked.

“It’s a very hard thing to predict. We do like, though, the ongoing… innovations that we’re seeing in Snapchat. I thought Snap Maps was one of the more interesting features that we’ve seen in the space for a while. They have to continue to do that, and this team seems to have a pretty good track record so far, the stock should work,” Mahaney said

And now, some reactions:

Millennial: "Am I still holding?"

You guys wanna see of my impression of post-IPO $SNAP? pic.twitter.com/Zg0PRQ3tZH