Yesterday, a private investigator in the Seth Rich murder case hired by the family of the slain DNC staffer filed a lawsuit against Fox5 news and GOP financier Ed Butowsky for misrepresenting statements he made in order to”shift the blame from Russia and help put to bed speculation that President Trump colluded with Russia…” because “that is the way the President wanted the article,” the suit alleges. 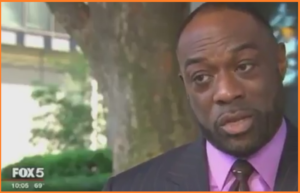 The plaintiff, former D.C. Police detective Rod Wheeler, also asserts that the Trump administration was directly involved with the story. Butowsky, who paid for Wheeler’s investigation on behalf of the Rich family, arranged a sit-down meeting with former Press Secretary Sean Spicer to brief him on Wheeler’s findings. While Spicer acknowledges the meeting, he told NPR that he only agreed to it as a favor.

Butowsky later boasted to Wheeler that President Trump had personally reviewed the Fox story prior to publication – a statement he now says was a joke.

“Rod Wheeler unfortunately was used as a pawn by Ed Butowsky, Fox News and the Trump administration to try and steer away the attention that was being given about the Russian hacking of the DNC emails,” -Douglas Wigdor, attorney for Rod Wheeler

Wheeler asserts that in order to kill the Russian hacking narrative, Fox and the Trump administration fabricated the following quotes for the article:

Except Wheeler said Seth did contact WikiLeaks, which is the whole point

In an on-camera interview with Fox5, Wheeler conveyed the exact same sentiments as the allegedly fabricated quotes:

Wheeler: I believe that the answer to solving his death lies on that computer…

Fox5: You have sources at the FBI saying that there is information that could link Seth Rich to Wikileaks?

Wheeler: For sure, absolutely, and that’s confirmed.

Wheeler goes on to claim that the police were told to back off the case:

I have a source inside the police department that has looked at me straight in the eye and said “Rod, we were told to stand down in this case, and I can’t share any information with you.”

Detective Wheeler backpedaled the next day, calling his on-camera statements a “miscommunication.”

Then, a week after the Fox5 story – Wheeler then sat down and told investigator George Webb “I do believe there was some communication between Seth Rich and Wikileaks.”

Regardless of the other elements in the lawsuit, Rod Wheeler’s findings are on record: Seth Rich directly communicated with WikiLeaks – which, if true, destroys the Russian hacking narrative (notwithstanding any new attempts to smear Seth Rich as a traitor who worked with the Russians).

Wheeler said that brother Aaron Rich tried to block Wheeler from looking at Seth’s computer, even though there could be evidence on it. “He said no, he said I have his computer, meaning him,” Wheeler said. “I said, well can I look at it?…He said, what are you looking for? I said anything that could indicate if Seth was having problems with someone. He said no, I already checked it. Don’t worry about it.”

Aaron also blocked Wheeler from finding out about who was at a party Seth attended the night of the murder.

“All I want you to do is work on the botched robbery theory and that’s it,” Aaron told Wheeler 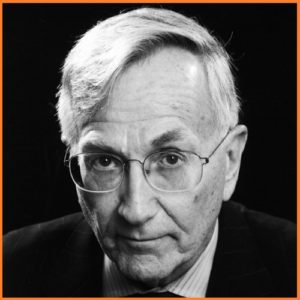 Rod Wheeler’s lawsuit also drags Pulitzer Prize winning investigative reporter Seymour Hersh into the Seth Rich fray. Hersh is as legitimate as they come – and is very connected to cloak-and-dagger types, however he drew sharp rebuke in 2011 when he said that the U.S. raid on Bin Laden was “one big lie, not one word of it is true.”

In Wheeler’s lawsuit, Butowsky claims Hersh – who was also investigating the Seth Rich case, told him of a ‘purported FBI report establishing that Seth Rich sent emails to WikiLeaks.”

Hersh denied the claim, telling NPR “I hear gossip… [Butowsky] took two and two and made 45 out of it.”

While Hersh told NPR on Monday that Butowsky’s claims of an FBI report hold no water, Butowsky taped their conversation – as profanity-laced leaked audio, reported Tuesday by Cassandra Fairbanks of Big League Politics, confirms that according to Hersh, Seth Rich contacted Wikileaks.

What the report says is that some time in late Spring… he makes contact with WikiLeaks, that’s in his computer,” he says. “Anyway, they found what he had done is that he had submitted a series of documents — of emails, of juicy emails, from the DNC.”

Hersh explains that it was unclear how the negotiations went, but that WikiLeaks did obtain access to a password protected DropBox where Rich had put the files.

“All I know is that he offered a sample, an extensive sample, I’m sure dozens of emails, and said ‘I want money.’ Later, WikiLeaks did get the password, he had a DropBox, a protected DropBox,” he said. They got access to the DropBox.”

Hersh also states that Rich had concerns about something happening to him, and had

“The word was passed, according to the NSA report, he also shared this DropBox with a couple of friends, so that ‘if anything happens to me it’s not going to solve your problems,’” he added. “WikiLeaks got access before he was killed.”

Hersh also told Butowsky that the DNC made up the Russian hacking story as a disinformation campaign – directly pointing a finger at former CIA director John Brennan as the architect.

I have a narrative of how that whole f*cking thing began. It’s a Brennan operation, it was an American disinformation, and the fu*kin’ President, at one point, they even started telling the press – they were backfeeding the Press, the head of the NSA was going and telling the press, fu*king c*cksucker Rogers, was telling the press that we even know who in the Russian military intelligence service leaked it.

Listen below, or read the full transcript by Reddit user /u/candylotus:

And with that, Rod Wheeler and Seymour Hersh – in their own words, all but confirmed that Seth Rich directly provided Wikileaks with the emails which were leaked during the election. Moreover, and this can’t be overlooked – Hersh accused the Obama administration, and John Brennan in particular, of fabricating the Russia narrative.

In a pair of odd tweets from last week, Wheeler hints that the arrest of DNC IT staffer Imran Awan is somehow connected to the Seth Rich case:

Follow the arrest of Awan closely. Connect the dots to "other" cases. (hint, hint) Just the beginning. Stay tuned.

Last but not least, let’s not forget that Julian Assange heavily implied Seth Rich was a source:

Here are some handy recaps from two weaponized autists at 4chan. Feel free to share. 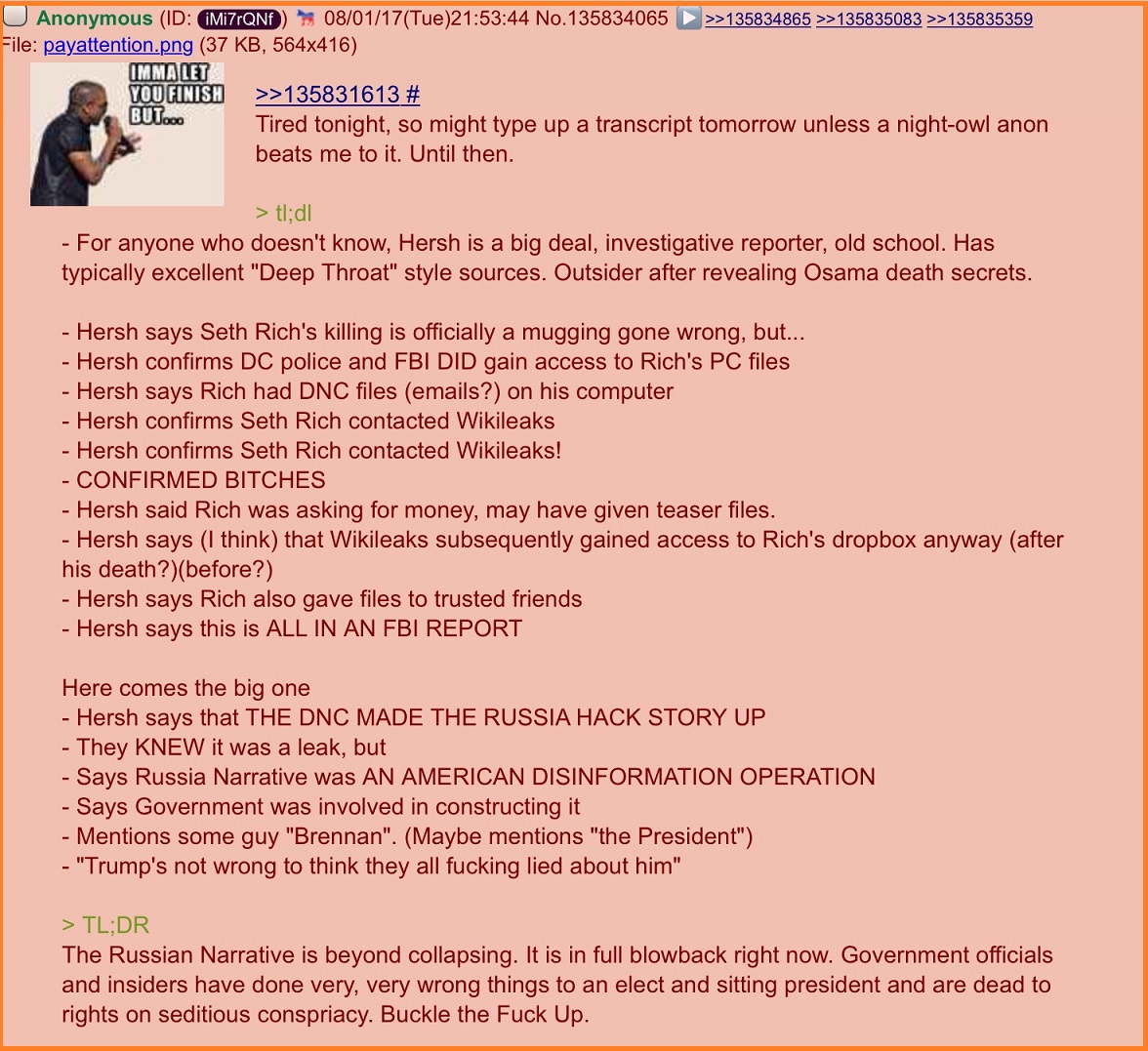 If you enjoy the content at iBankCoin, please follow us on Twitter
2017-08-02
zeropointnow
Share
Previous Why Was DC Police Tactical Unit Sent To Nancy Pelosi’s House During Shooting Of Rep. Steve Scalise?
Next SNAP SHAT: Shares Hit Fresh Lows Amid Lockup Expiration And Rejection From S&P 500