In preparation for the United States and it’s allies going to war with North Korea, China has reportedly been beefing up defenses along it’s 880 mile border with the small but powerful Asian country, according to the Wall St. Journal.

Although technically allied to Pyongyang, Beijing wouldn’t necessarily defend its regime, but is determined to prevent a flood of North Koreans from entering northeastern China and to protect the population there, U.S. and Chinese experts say.

Recent measures include establishing a new border defense brigade, 24-hour video surveillance of the mountainous frontier backed by aerial drones, and bunkers to protect against nuclear and chemical blasts, according to the websites.

A review of official military and government websites and interviews with experts who have studied the preparations show that Beijing has implemented many of the changes in recent months after initiating them last year. They coincide with repeated warnings by U.S. President Donald Trump that he is weighing military action to halt North Korea’s nuclear weapons program while exerting pressure on China to do more to rein in Pyongyang. -WSJ

China has also been conducting live-fire drills along the border with special forces and other units in the area, including airborne troops which could be sent into North Korea at a moment’s notice. In June, the Chinese military held exercises with helicopter gunships, and in July an armored infantry unit was transferred near the border and equipped with new weapons. 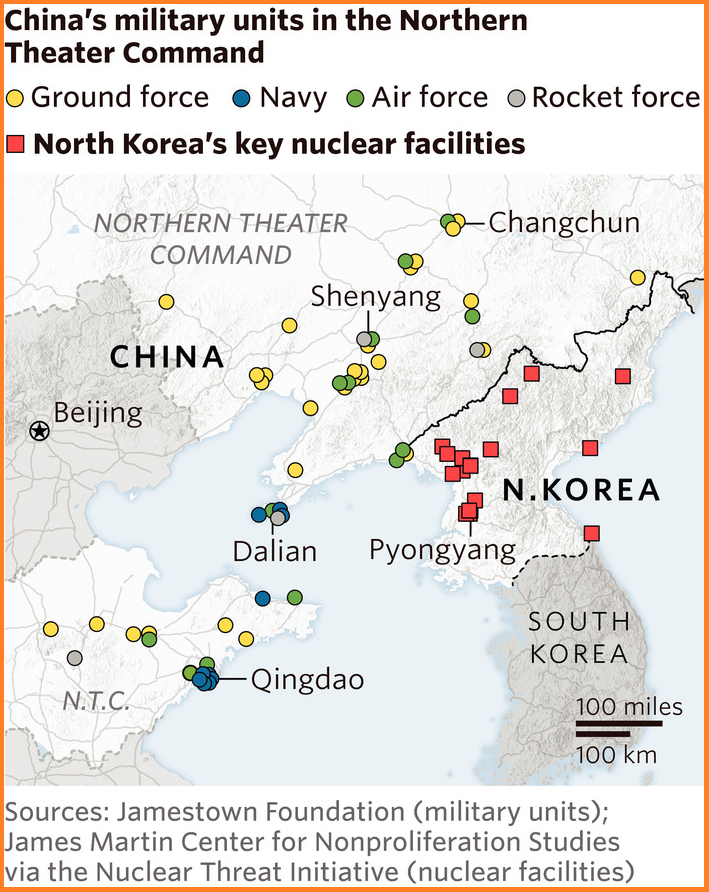 When contacted for comment by the WSJ on whether the military movements were connected to North Korea, the Chinese Defense Ministry didn’t respond directly – instead responding that their forces “maintain a normal state of combat readiness and training” along the border. China also denied previous reports that thousands of Chinese troops were moved, adding that “Military means shouldn’t be an option to solve the Korean Peninsula issue.”

While Chinese authorities have been preparing for trouble over North Korea – including the establishment of contingency plans for nuclear contamination, economic collapse, or conventional warfare, the country’s recent changes in force structure, training, and equipment are linked to a nationwide effort to replace old Soviet-modeled command structures and out of date hardware.

“Once you start talking about efforts from outside powers, in particular the United States and South Korea, to stabilize the North, to seize nuclear weapons or WMD, in those cases then I think you’re starting to look at a much more robust Chinese response,” he said. “If you’re going to make me place bets on where I think the U.S. and China would first get into a conflict, it’s not Taiwan, the South China Sea or the East China Sea: I think it’s the Korean Peninsula.” -WSJ

And while China is technically aligned with Pyongyang, the consensus seems to be that Beijing wouldn’t lift a finger if the United States and South Korea initiated military action in North Korea. Indeed, China is worried about a U.S. initiated war resulting in a North Korean refugee crisis.

That, they say, would require a much larger Chinese operation than just sealing border, with special forces and airborne troops likely entering first to secure nuclear sites, followed by armored ground forces with air cover, pushing deep into North Korea.

What remains to be seen is whether or not these moves by China are telegraphing an imminent strike, or if they’re simply trying to help Trump punk Kim Jong Un into compliance.