For the past several months, 39-year-old crypto entrepreneur Marty M – known online as “PepeCashMillionaire,”  and MartyMcFly has been living on a yacht at the Bowden Island Marina off Vancouver be bought by selling “Rare Pepes” – digital assets integrated into the blockchain like Bitcoin.

Rare Pepes can be exchanged or sold for Pepe Cash, a cryptocurrency used by fans of Pepe the frog – a character made popular by 4chan and labeled a “hate symbol” by the Anti-Defamation League (ADL) during the 2016 election. At present there are around 1500 Rare Pepe cards, with a little over 600 listed in the Rare Pepe Directory.

Motherboard caught up with PepeCashMillionaire for an exclusive interview, republished below:

Motherboard: Hi PepeCashMillionnaire. You can introduce yourself ?

Marty M.: I think I’m 39, I do not count too much. I was born in Poland, I lived under communism for about ten years. I came to Canada with my parents when I was 10 years old. I was a geek when I was young, I went to a school for gifted. But I also liked to smoke weed. So, I did not finish my computer studies. After four years, I sent everything shit and took off for the sunniest place possible, California. I stayed there illegally for seven years and I came back to Canada in 2009, when the economy was planted. I finished my studies, I found a job in which I managed a small team of developers for seven years. And the second year, one of the guys in the group told me about Bitcoin.

That’s how it all started?

Yes. He was mining on his work computer. At the time, Bitcoin was worth six dollars. I thought it was cool and I put $ 10,000. I bought at the wrong time, sold at the wrong time, did absolutely anything and did not win anything for three years but stayed in the community. I had a good job, I could afford to be a player. When the price began to rise, I knew that the crypto delirium was not going to stop. I started doing sleepless nights to ride Ethereum miners , I ran 18 graphics cards in my apartment, I got to work exhausted. I fell asleep on my desk and my boss woke me up.

How long have you been doing this?

In August 2016, I resigned the hard way. My life was great but I felt it was the end of the world. All I had to do was go to work. I dropped everything for cryptos. I think I did not win a penny with Bitcoin for six months. Once I lost seven of them. A nightmare. And then, in 2017, the value of the Pepe I bought for nothing in 2016 was multiplied by 20. When I saw that, I threw myself into it. What I had lost in Bitcoin was offset by the rise of Pepe Cash in recent months. Market movements were crazy, a good manager could make 20% margins. That’s how I earned my money.

I am intrigued by your nickname. You are a millionaire in Pepe Cash or dollars?

A bit of both. (Laughs.) I have cards worth $ 350,000, $ 400,000, $ 5 million. These are fun numbers, not for real. But last month, I sold less than one percent of my shares for half of my annual salary when I was in development. The problem is that there are not enough buyers to allow me to sell everything I have at this price. My plan is to minimize my daily expenses and stay involved in the community because one day, like every time, it will explode. And at that time, I will have to fight to sell everything I have at a high enough price.

Good. How much do you earn, day to day?

I must say that returns are sporadic. All in all, Bitcoin trading has not been very lucrative because of the vagaries of the market. Bitcoin trading, big deals, all of that make the big majority of people lose a lot of money. I made the majority of my money in August and December last with Rare Pepe. I think the next push will be for March. It’s an income, but not a stable income. You can earn thousands of dollars in three days and struggle to make a few hundred dollars in the following weeks. If you have a child, a wife and a credit, it can be difficult.

I go to bed about three or four in the morning. When I wake up, I check that the sun is still there. If this is the case, I make coffee, I eat blueberries, I cut myself a piece of cheesecake for breakfast. Then I consult the courses to avoid surprises. If there is no problem, I do what I want with my day. I welcome couch surfers, I prepare the boat, I will visit a micro-brewery with my father … A Tuesday at 14h. I feel obliged to maintain my wealth, to grow it, and at the same time I can disconnect. I have money safe.

How long do you hope to live like this? What is your objective ?

In five years, I would like to have a yacht on every continent. I want friends I met through the couch surfing who take care of these boats, so that I can fly to any place in the world and navigate with them as I see fit. In ten years time, I would like to be rich humanly. I want to grow our community. Of course, if I have enough to pay for boats all around the world, I am very happy. But above all I would like to have a community of hundreds of thousands of members who express their political dissensions without risk of being transferred or banned.

How does Pepe Cash relate to political dissension? You know that Pepe has a rather heavy liability in the sector.

Many people say Pepe are racist and Nazi memes. My grandmother fought against the Nazis during the Warsaw uprising, she received shrapnel in her legs. My family has largely proven that it is not racist. I am not racist, I like blacks. That said, I do not need to be a socialist, a liberal, a zinzin of the redistribution of wealth. I saw the logical conclusion of all that.

Most Pepe cards are completely innocent but some are a little taboo. There is one called Killary Pepe (in reference to a conspiracy theory that says the Clinton couple had political opponents assassinated, ed) . You could send mail to have it removed from a magazine. But you can not remove it from the blockchain. That’s what interests me.

Thanks to the blockchain, we now have a permanent graffiti wall. People will be able to consult it to enter the ethos at the popular level, without intermediary to limit this expression. It’s exactly like hieroglyphs. In hundreds of years, people will analyze the Pepe, they will look for their political meaning, their meaning … There will be so much detailed research about them that it will become a new field of study, a kind of meme archeology. You will be able to trace the origin of social modes and constructions through memes.

I understand that the system Rare Pepe also had an interest for artists and art dealers?

Representatives of Sotheby’s came to the Rare Pepe auction held in Manhattan last month … Leonardo da Vinci’s Salvator Mundi was sold for $ 450 million. Now, imagine that an artist reproduces it perfectly. If you find yourself in the same room as the original and copy, good luck to differentiate them without tools.

With blockchain and verified transactions you can be the world’s greatest mathematician, artist or cryptography genius, you will never be able to duplicate a blockchain-based work. If you do digital art, of course, you can do a jpeg or a gif, but it will be stolen art. You will not be able to prove that you have the private key. The guy who bought the Homer Pepe for $ 38,500 at the Manhattan auction is his only real owner.

Why did you open the Museum of Modern Pepe ?

Last summer, one of our community members tried to book a site at Comic Con to present the Rare Pepe. I do not know if it’s because she’s transgender, but those fucking liberals at shit comics refused. We wondered what we could do to be present in spite of everything.

I thought that Andy Warhol’s canned soup was widely perceived as nil when it came out. They ended up in museums or sold for millions. That’s when I clicked. When I was in San Francisco, I went to the Museum of Modern Art and watched digital artworks. And I told myself that the Pepe were entitled to their own museum online, a Museum of Modern Pepe.

Two months after I launched the site, a virtual reality box, PrimeVR, contacted me accusing me of cybersquatting . It had been about two years since they were working on their own Museum of Modern Pepe in virtual reality. You can walk it, there are thousands of Rare Pepe on the walls, you can see the prices by clicking on it … The works are virtual, the museum is virtual. Only the price is real. 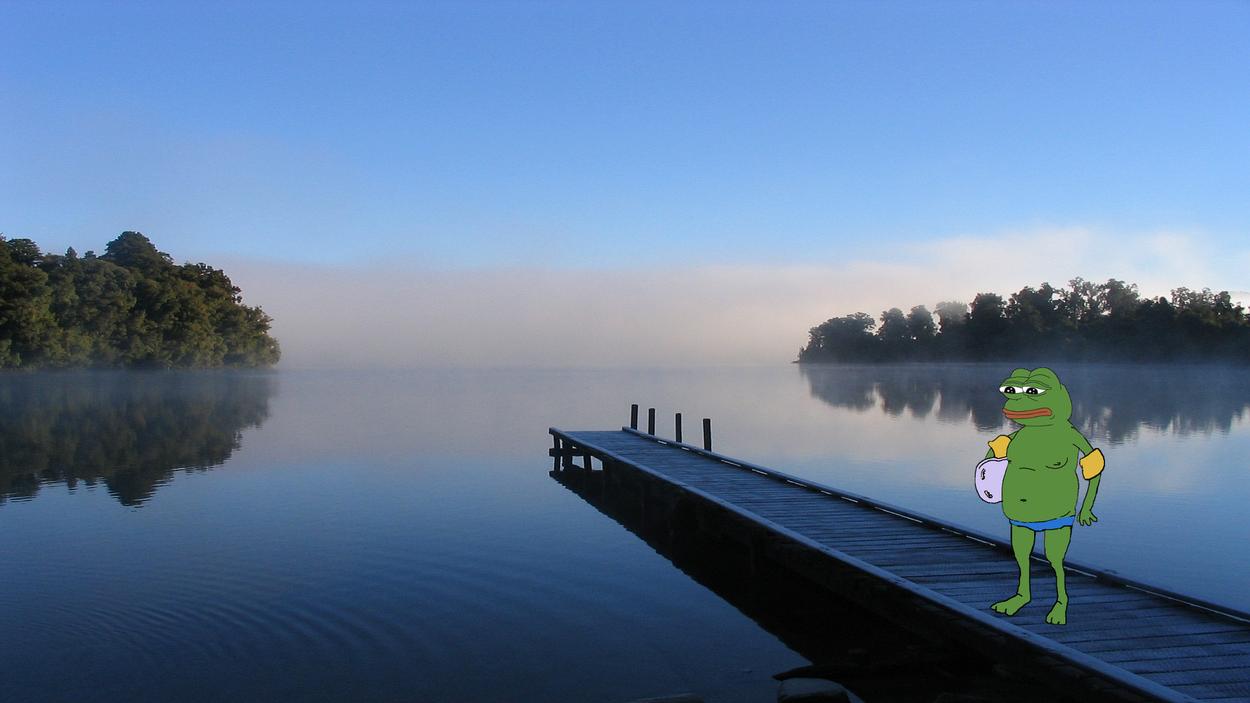 It’s cool, but what interest?

Everyone is connected to the Internet. Therefore, why would one need to go to a museum? Why go to an art auction? Why go anywhere, apart from the back of your boat with your laptop, and participate in virtual auctions to buy virtual artwork, which you will come back for more money later?

All this stuff going somewhere to make money in the Internet age seems to me insane. I want to move to have a social life, not to work. (Laughs.) I want the money to come to me to finance my life. It’s selfish, but why not?

If you enjoy the content at iBankCoin, please follow us on Twitter
2018-02-16
zeropointnow
Share
Previous Did The Bigot Who “Painted” Obama’s Portrait Stick A Giant Sperm On His Forehead?
Next Goldman Warns: Federal Deficit Spending In “Uncharted Territory”, May Not End Well