As liberal talking heads and smarmy Democrat legislators try to tell you the Trump campaign wasn’t surveilled – consider the fact that IT FUCKING WAS.

For four months, the mainstream press was very content to have Americans believe — indeed, they encouraged Americans to believe — that a vigorous national-security investigation of the Trump presidential campaign was ongoing. “A counterintelligence investigation,” the New York Times called it. –National Review

And the NY Times found out through an illegal leak to the newspaper from the intelligence community. We know one of the targets was Mike Flynn – as acting Attorney General Sally Yates warned the Trump campaign to be weary of him because of transcripts of Flynn’s phone calls with Russians – obtained through FISA wiretaps and other investigatory methods (which the directors of the CIA, NSA, and FBI said revealed no collusion). The other two targets of surveillance were likely either Paul Manafort, Steve Miller or Roger Stone. And considering that any time Trump talked to any of these individuals via phone, he too was surveilled. But again – how do WE know any this? The intelligence community illegally leaked the whole thing to the media. Dicks! 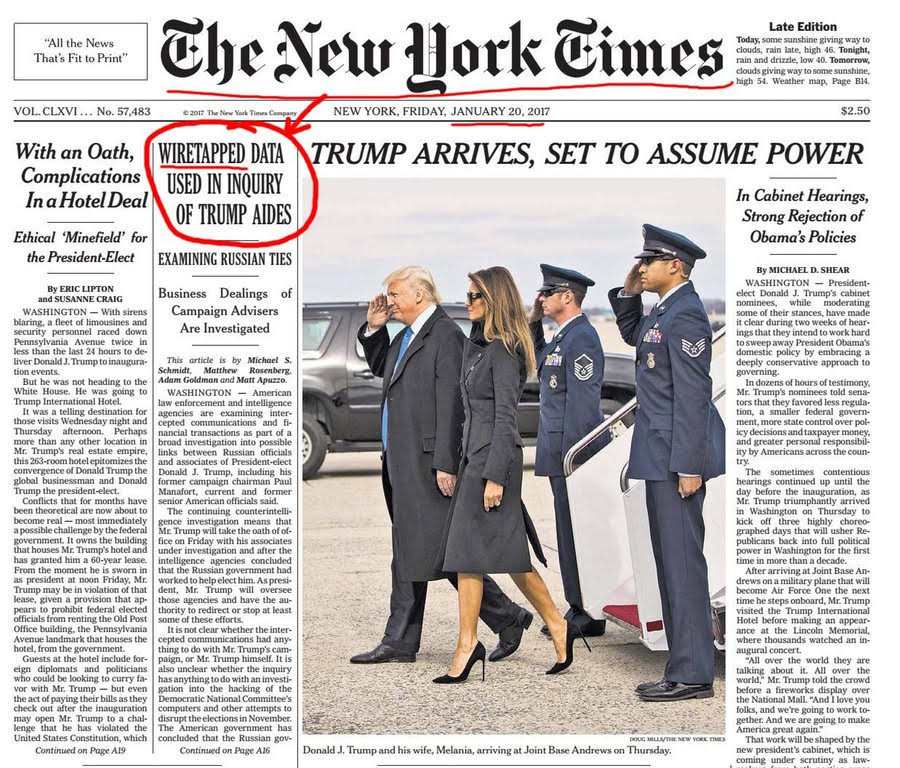 Now the left is trying to suggest none of this happened. That the sitting US President may have helped the a Presidential candidate by surveilling their opposition.

If you want to get a better handle on the mental gymnastics and semantic arguments employed, read Michael Doran’s article (which I posted the other day), originally published in the paywalled Wall St Journal. Doran, a PhD from Princeton and a Stanford undergrad – is a Senior Fellow at the Hudson Institute and an expert on international politics of the Middle East. He’s way fucking smaht: https://en.wikipedia.org/wiki/Michael_Scott_Doran  You can also just click here and read his 30 tweet synopsis from last weekend.

And to add to it, the National Review puts the whole thing into perfect perspective:

Moreover, if such an investigation had involved national-security wiretaps under the Foreign Intelligence Surveillance Act (FISA), that would suggest that the Obama Justice Department had alleged, in court, that Trump associates had acted as “agents of a foreign power” — in this case, Russia.
Get it? If there is no hacking conspiracy — and there manifestly is not — the big scandal here is not possible Trump-campaign collusion with Russia. It is that the Obama Justice Department may have used its legal authorities to investigate the Democrats’ top political adversary. And not to be overlooked: This would have been done at the very same time the same Obama Justice Department was bending over backwards to whitewash the extremely serious criminal case against the Democrats’ nominee, Hillary Clinton. It would have meant Obama had his thumb on the election scale. –National Review

I have to imagine a fair number of swing voters are massively turned off by all of this lying – though I look forward to the chorus soft-handed metrosexual liberals defending it.