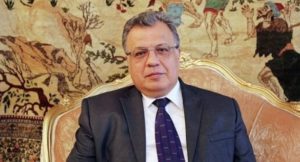 Russian ambassador to Turkey, Andrei Karlov, was assassinated while giving a speech today in Ankra, Turkey. The Mirror reports that the gunman, Turkish riot cop Mevlüt Mert Altıntaş, shouted “We die in Aleppo, you die here” before opening fire. He then went on a diatribe, shouting “Allahu Akbar,” before reportedly ordering people out of the room and firing more shots into the Ambassador.

Not much is else is known about the situation, however there are currently raids going on against terrorists in Belgium right now, as well as a shooting at an Islamic center in Zurich, Switzerland (see below video). No word on whether these incidents are related.

UPDATE: Assasin that killed Russian Ambassador is Mevlüt Mert Altıntaş and was a Riot police officer in Ankara

This is unfortunate timing just three days after President Obama’s press conference last Friday, in which he stated:

While there is no evidence that Obama or the west is connected, we do know that Clinton Foundation donors Saudi Arabia and Qatar have armed, financed, and otherwise supported ISIS and other terror groups. If this gunman was acting on behalf of the these interests [NSFW] (Free Syrian Army, Al Nusra, ISIL), as it appears, consider this a big “fuck you” from Saudi Arabia and Qatar in retaliation for not getting their pipeline. Also, prepare for the mother of all coalitions against Islamic terror – as we may be about to team up with Russia to kick some Jihadist ass.

UPDATE: The shooter of the Russian ambassador to Turkey was a Turkish police officer, he was killed by police forces after the assassination pic.twitter.com/n41jXJwgUA

Also of note, things are going down in Belgium and Zurich right now:

UPDATE: The is currently a massive police repsonse to the entire area of the Islamic center near the main train station in #Zurich pic.twitter.com/musshpfFix