Texas “Faithless Elector” Chris Suprun, who claims to be conservative but uses a liberal PR firm, and bought an Ashley Madison subscription while bankrupt and married w/3 kids, AND running a 9/11 charity, turns out to be a giant liar too!

Dallas ABC affiliate WFAA 8 did some digging into Suprun’s claim that he was a first responder firefighter at the Pentagon on 9/11 – when in fact, a firefighter who knew him and worked with him said Suprun didn’t start until October of 2011. This was confirmed by the Manassas Park, VA Fire Department. WFAA also found that Suprun collected unemployment while his resume suggested he was gainfully employed as a paramedic, and upon further digging, found that of Suprun’s two currently listed employers, one has never heard of him, and the other does not exist. What a fraud. Again;

FAITHLESS ELECTOR CHRIS SUPRUN HAS LIED ABOUT, AND CAPITALIZED ON, BEING A FIREFIGHTER ON 9/11 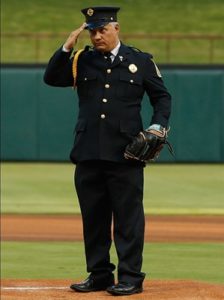 Look at this lying sack of shit about to throw the first pitch at a Rangers game in 2015 after being introduced as a 9/11 hero. This is stolen valor.

So we’ve got ONE Republican “Faithless Elector” who’s a complete fraud, a video made by a bunch of liberal hollywood traitors which they had to disable voting on because nobody was buying their shit, and Nancy Pelosi’s daughter (wow, how did she get to be an Elector?) who is leading the charge of 49 democrats (and 1 cucked republican) to overturn the results of the election. Are we almost done with this tantrum?

Suprun, a Dallas resident for more than a decade, even used his résumé to establish credibility in the Times piece, writing in the second paragraph: “Fifteen years ago, as a firefighter, I was part of the response to the Sept. 11 attacks against our nation.”

He has founded a nonprofit called Never Forget and state records show he is a licensed paramedic — but much of the rest of résumé, publicly available on LinkedIn, is questionable.

In addition, on at least two occasions over the last couple years at crowded Major League Baseball games, Suprun has been introduced as a 9/11 veteran before throwing out first pitches.

“He claimed to be a first responder with the Manassas Park [Virginia] Fire Department on September 11, 2001 and personally told us stories ‘I was fighting fire that day at the Pentagon.’ No, I was on a medic unit that day at the Pentagon and you make a phone call to Manassas Park and you find out that he wasn’t even employed there until October 2001,” said a first responder who knows Suprun and only agreed to speak about him if his identity was concealed. –ABC WFAA Dallas

Previous John Kerry: Dismissive Of Politicized CIA “Intelligence” But Still Claims Russia Influenced US Election – To Be Addressed In “Months Ahead”
Next Obama; Russians Hacked Us, Told Them To “Cut It Out,” Obsessed Media Reporting Biased Voters, But Let’s Get Trump In The White House