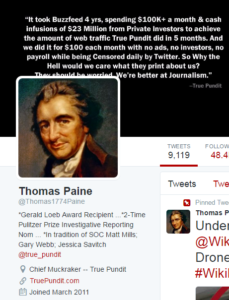 Prolific investigative journalism website True Pundit, run by a gentleman who goes by the twitter handle Thomas Paine (@Thomas1774Paine), has been on the bleeding edge of newsflow throughout the election – breaking several stories himself, including the pending NYPD Weiner Laptop investigation before it was officially announced.

In a breaking story this evening, “CIA personnel with direct knowledge of the case” told True Pundit that the WaPo story was utter horseshit, and that there is nothing definitive about the hacks whatsoever.

The Central Intelligence Agency is declaring the Washington Post’s much-hyped story linking the Russian government to hacking the presidential election to help Donald Trump an “outright lie,” according to CIA personnel with direct knowledge of the case.

The Washington Post, in a front-page splash on Friday, fingered the CIA for allegedly confirming the wild rumors of Russian hacking that were concocted and spread by Democratic lawmakers for months preceding the election and the weeks since the GOP win. The Washington Post’s story, however, contained no CIA sources and in fact, no credible U.S. intelligence agency sources whatsoever. Instead, it hinged on what unnamed lawmakers had supposedly been told by unidentified, supposed CIA-linked sources in “secret” briefings: That the CIA had developed proof the Russian state waged an orchestrated campaign to destabilize the U.S. election to benefit GOP-candidate Trump.

“It’s an outright lie,” a CIA analyst divulged to True Pundit. “There’s nothing definitive like that. There are leads from activity originating in Finland, Italy, Norway, Sweden, Britain, France, China and Russia.”

If the acceptable standard of evidence is “sources say,” then there’s absolutely no reason to believe True Pundit’s reporting is any less credible than the Washington Post – which is owned by Trump foe and full time WORM LOOKIN’ MOTHERFUCKER, Jeff Bezos. Recall, in addition to the baseless CIA rumored hit piece, Bezos’s WaPo also engaged in the “FAKE NEWS” witch hunt with their bullshit industry blacklist (for which they had to issue a massive “Editor’s Note” distancing themselves from the source).

Washington Post added editor's note to top of "Russian propaganda" story after being called out for shoddy reportinghttps://t.co/dWKbZJGS9a pic.twitter.com/skGiZUX2Ls 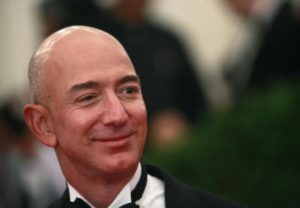