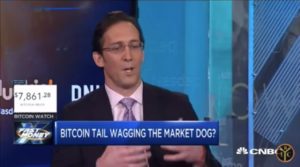 Wells Fargo head of equity strategy, Christopher Harvey, says that if the bitcoin bubble bursts, the stock market may be toast for a while.

Harvey says the two are correlated, noting on Wednesday’s edition of Fast Money “On Monday what we saw is all risk products sell off,” and that as investors lose confidence in one major investment, such as the market, “It sometimes adds fuel to the fire” as people panic out of other asset classes.

As markets continued to break all-time highs in what looks like a parabolic on a 30-year chart, investors sought alternate asset classes such as cryptocurrencies for the next rocket to the moon. Thus, the euphoria of banking coin in correlated asset classes can consequently lead to despair in both once they begin to go sideways and/or sell off.

Point in case, Monday’s epic 1,175 point selloff in the Dow was accompanied by a devastating rout in Bitcoin, which traded down to $5,947 after hitting all time highs weeks earlier. (Pop!)

“We think of it more as what we have to watch out for, what we have to … tell our clients to be careful of,” Harvey said. “We don’t make a call whether it’s going to go up or down but that it’s a risk in the marketplace, and it’s really far out on the risk spectrum.”

Wells Fargo raised its price target for equities, up about 10 percent over the next year. Its 2018 S&P 500 year-end target is 2,950, compared with the earlier target of 2,863. Cryptocurrencies and the market should trade in correlation over the next three to six months, it said.

“If we’re right, what we should see is risk product going higher,” Harvey said.

“If we’re right and risk starts to be bid again, it wouldn’t surprise us to see a bid in some of the crypto markets,” he said.

If you enjoy the content at iBankCoin, please follow us on Twitter
2018-02-07
zeropointnow
Share
Previous Uber Wrong To Pay Hacker $100,000 And Cover Up Breach Affecting 57 Million Accounts, CIO Testifies
Next Dow Coughs Up Lung, Closes Down 1000+ Points As We Enter Technical Correction