A Lone Samurai Is Ready To Guillotine Yen Shorts

The Yen has been grinding lower, I was and still am not entirely sure if we bottom here or if we get one final major downward flush out move. But the signs are pointing to a bottom, and it would be hard to see a major flush out when we are this oversold on all 3 timeframes.

Falling Wedge Pattern.
Triple Oversold (Got it from “OA” Ask Option Addict if you want the indicator).
At Support of Wedge Pattern.
Near Support of Volume Profile (market of plenty of buyers and sellers below can act as a range of prices to hold it from further declines.)
Volume is Thinner above (A bounce can really move higher quickly).
There are a lot of things going for it. Great spot to manage your risk as well as tremendous upside.

For now I am long FXY calls with my capital from my reduced stake in the dollar.

END_OF_DOCUMENT_TOKEN_TO_BE_REPLACED

I am long the Dollar, via some Jan 2014 calls and I view it as more than just a hedge. 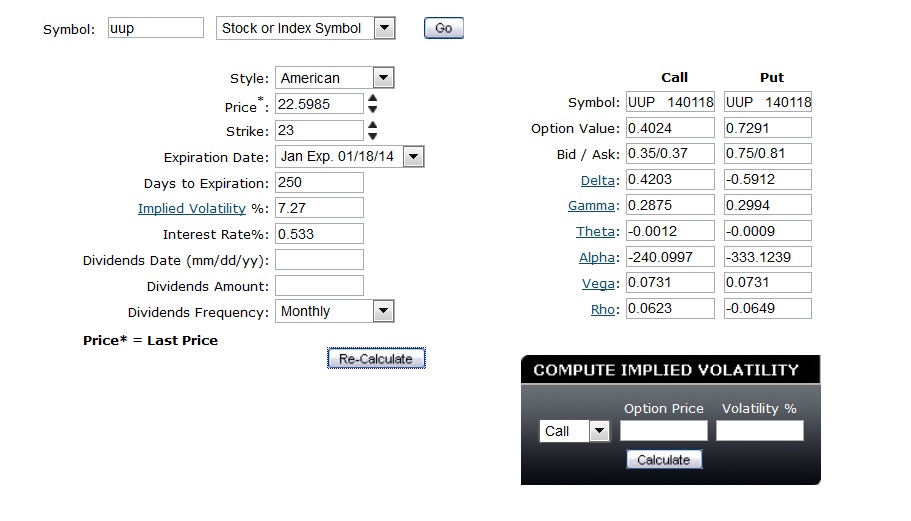 Secondly, the technical picture is bullish long term. Ascending triangle with declining volume profile above. Looks good on a monthly and weekly chart.

Thirdly, this is confirmed by the Bearish Euro and Currency Appears to be Shifting.

Also, by buying lots of time value (something I don’t always like to do), I protect myself if I am wrong. Although you typically are better off betting on a short term swing for a maximum percentage gain if you are right, if it goes against you it hurts you. When the option is made up of all time value and you have more time value than you need, if it goes against you the majority of the position is intact providing a huge margin of safety, something that I like a lot more when I am producing a longer term “hedge” play since I also am paying less PER month of “insurance”. By managing Theta like this I can still sell or roll the option in a few months with minimal loss. I still think the potential to gain is very high but it’s a longer term pattern anyways and something I am looking more at as protection that allows me to stay aggressively long in other names without being significantly at risk. I still end up preserving some capital should everything go wrong and somehow markets decline while the dollar tanks because there will still be people willing to pay for the “potential” of the dollar going higher as long as there is still a decent chunk of time left on it.

Finally and perhaps most importantly, I believe we are headed into a period of time like the early 80s marked by declining commodity prices, rising dollar, and rising stock prices. (I think commodities MAY be the exception at some point but think the metals for example have yet to bottom) 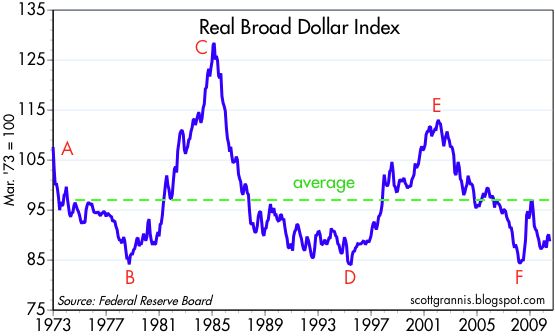 I don’t think you realize what a tremendous opportunity this could be. You can effectively look at it as a hedge that has a strong possibility of doing well. It’s entirely possible that the dollar goes higher WHILE the market goes higher. If I am wrong, then it still has a strong possibility that it protects you from the downswings and hedges you from market panics as we enter the volatile and dangerous period in May and through October Period where historically market has been flat to down and highly volatile. If my timing is wrong I provided you with a contract that has plenty of time left on it to allow you to do something with it (roll it, sell a shorter term contract against it, or sell and still preserve some value)

I just don’t think anything is going to replace the dollar anytime soon. The Euro is structurally flawed and the Yen has too much government restriction/interference and is determined to inflate. The Cyprus event not only exposed the dangers of a currency with inflationary checks (which made it deflationary), but also is likely to scare capital in the Euro if there is even the suggestion or rumor that the governments are having troubles.

Just like in the US when depression happened because The US was in a gold standard, Gold could not easily and freely go up in price so everything else had to go down in price. The Euro has an inflationary check and inability to inflate easily as they did not create as elastic of money supply like the US. As a result since they can’t as easily print, they previously had to hike rates to attract capital since the money supply was somewhat fixed. and since there was no central euro bond individual countries came up short which resulted in eventual bailout from other members of the euro anyways, and with individual country bonds you could still pile on and effectively get short the countries “currency” anyways through trading the individual bonds.
Well we all know the problems that this has caused. First of all, politicians got elected by promising things, delivering and not creating plans to financing it (kicking the can)… But this is not the dollar and the currency doesn’t function the same way. You can use austerity and higher taxes to attempt to raise capital when you are short on it, you can attempt to decrease payments by forcing bond holders into taking a haircut (but which may cause trust issues in the bonds and currency in the future), or you can even go crazy and rob the depositors like Cyprus event. You can also go to other countries and get a bailout. But all of this action is mostly deflationary except the bailouts and deflationary type of action has slowed growth and cause the debt to go up which makes even Germany at high debt to GDP levels. The ironic consequences of the euro’s action is likely going to be a loss of confidence anyways as capital is going to flea into markets and into the dollar. But the euro has to inflate, they have no other choice as the deflationary spiral as a result of their inelastic money supply isn’t working. And when it comes down to it I believe that is what they will do.

But what happens when you hike the interest rates? There’s a belief that the markets crash and demand for real estate drops. Historically that doesn’t appear to be true as bull markets correlate with rising interest rates. Partly that is because it means their is a demand for cash because businesses are actually growing and borrowing money to grow. Nevertheless, it could be problematic as the banks likely aren’t going to be as willing to borrow money at low interest rates and speculate in the market. The demand for cash continues and people perhaps start saving and paying down their debts. On the other hand, people believing that interest rates would keep going down may actually rush out to buy a home or refinance while they can. People like low interest rates, but only when they start rising do people fear that they will really start going higher and so they rush out and buy only AFTER interest rates begin rising. In theory they borrow more at 3% than at 4%, but not if they think it goes to 2.8% the next week.
It will be a very strange market that seems to violate the classic economic textbooks and that’s mostly because the textbooks aren’t based upon globally interwoven economies. As a result I believe there is a tremendous opportunity.

Both being long the dollar and being stocks may produce winning positions while also protecting you from panics in the market. If that happens, people also flood into cash.

The ability to bet heavily on the dollar with option positions provides the ability to stay aggressively long the markets in individual names with great setups. Meanwhile if you want another way to reduce correlation, to stay long the market with less worry about what happens, you can learn to get good at picking individual biotech names. Of course it’s not without risk. You could see a dollar down, market down scenario I suppose but I’m willing to bet you that doesn’t happen.