Stocks remain in a monthly downtrend, but a weekly uptrend although the weekly uptrend is now overbought. The economy is in a very vulnerable position here.

It starts in Europe. A sovereign default occurred in Austria in 1931 that kicked off a wave of others and the great depression. Some chatter is heard about the problems in Europe having similar consequences this time around.

The problem is with Spain and Italy as they will likely roll their debt in 2012, yet the interest rates have risen drastically in the last Q of the year so this will be costly and their debt will rise.

Meanwhile, in the US we have large trade deficits and debt to GDP of over 100%, unfunded liabilities over 100T but the 10 year treasury yield should close this month at an all time low as it currently is 1.91%.

Additionally there is a lot of old debt coming due. If we look at the peak in debt in 2007 in the United States, only one slice of the real money supply, the general leverage stood at nearly $60 trillion. So if you think $3T will put a dent in that, you are saying that leverage only declined by 5% from 2007. There is mark to market accounting, so any official numbers will be inflated. Put even 25% deleveraging and there will be no inflation from QE1 and QE2 as the 15T in debt destruction will put deflationary pressures and foreclosures and bankruptcies and shortages on payments, meanwhile the new debt being created can potentially lead to inflation in other areas, or the combination of “stagflation” as Milton Friedman once predicted. Perhaps that will not come in the US as interest rates are currently at all time lows, however, it seems the global economy is interdependent and we risk a global contagion from what may play out in Europe. It would surprise me to see slow growth, high unemployment (which we have) and high inflation (which we have in terms of real goods).

Not helping the situation, is that there isn’t exactly a lot of cash and room to spare in terms of the market.

With cash levels low, if there gets to be a shortage of liquidity, and people start to withdraw money from mutual funds, they will be forced to sell, which will further depress prices, causing others to want their money out. It really won’t take much for capital to flow out.

Here is where the trends are at… 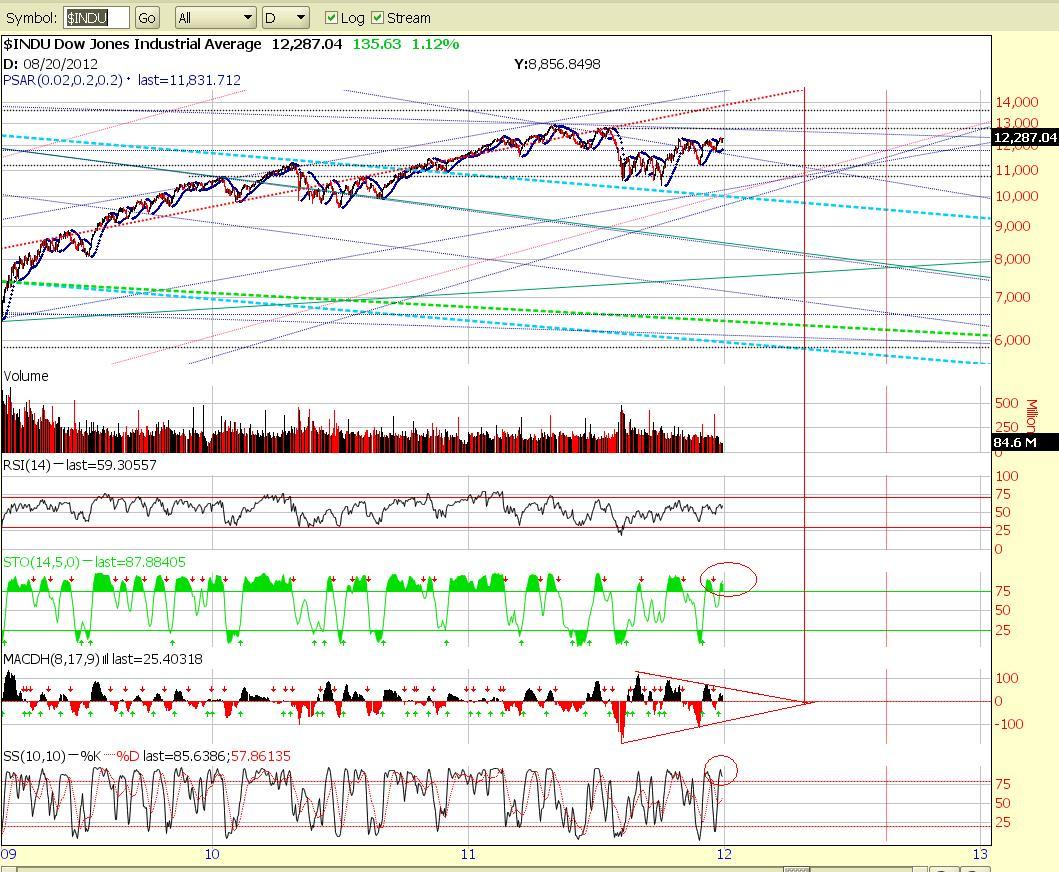 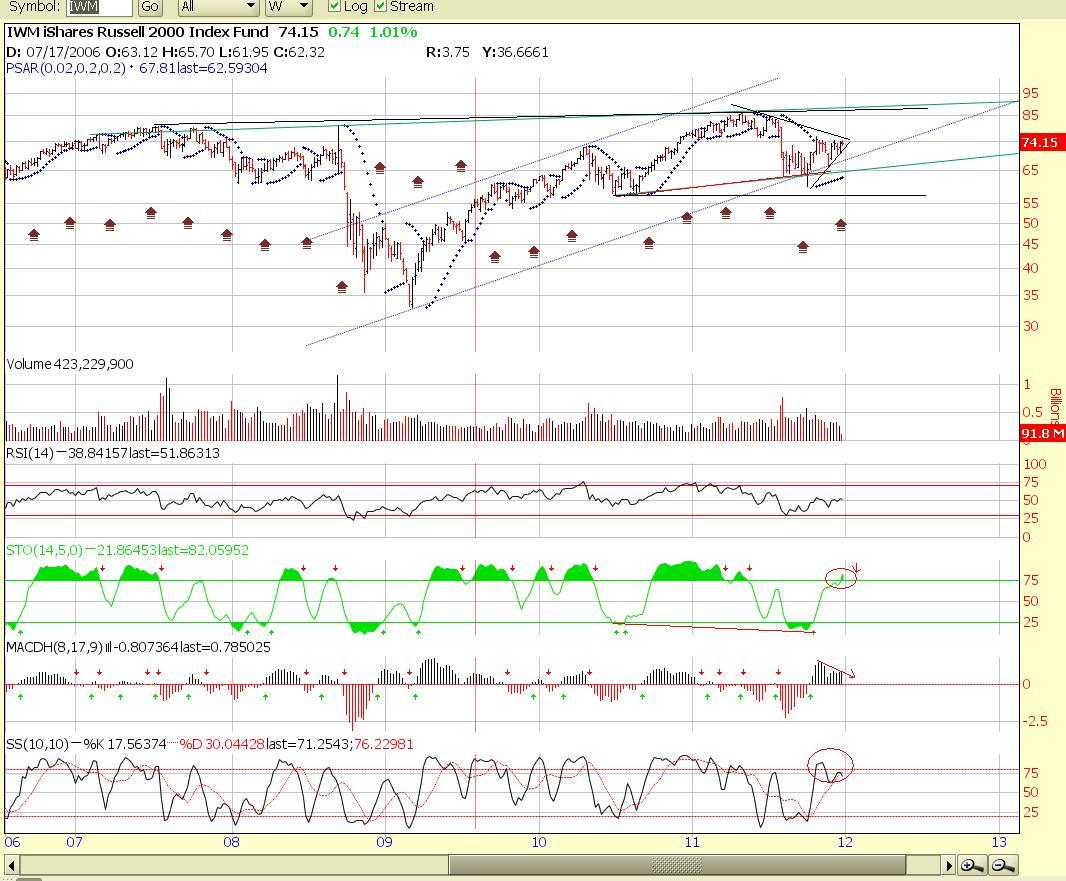 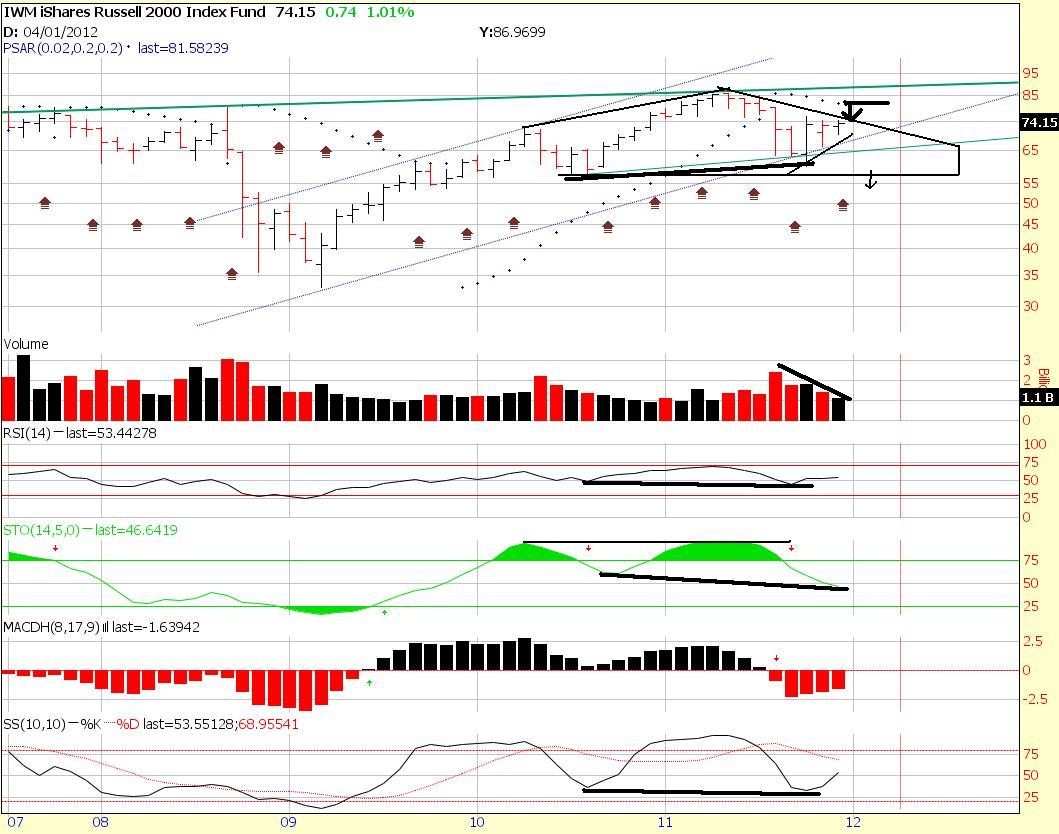 TLT looks significantly overbought but potentially making one final parabolic push with room to go higher for the time being. Volume is going parabolic. 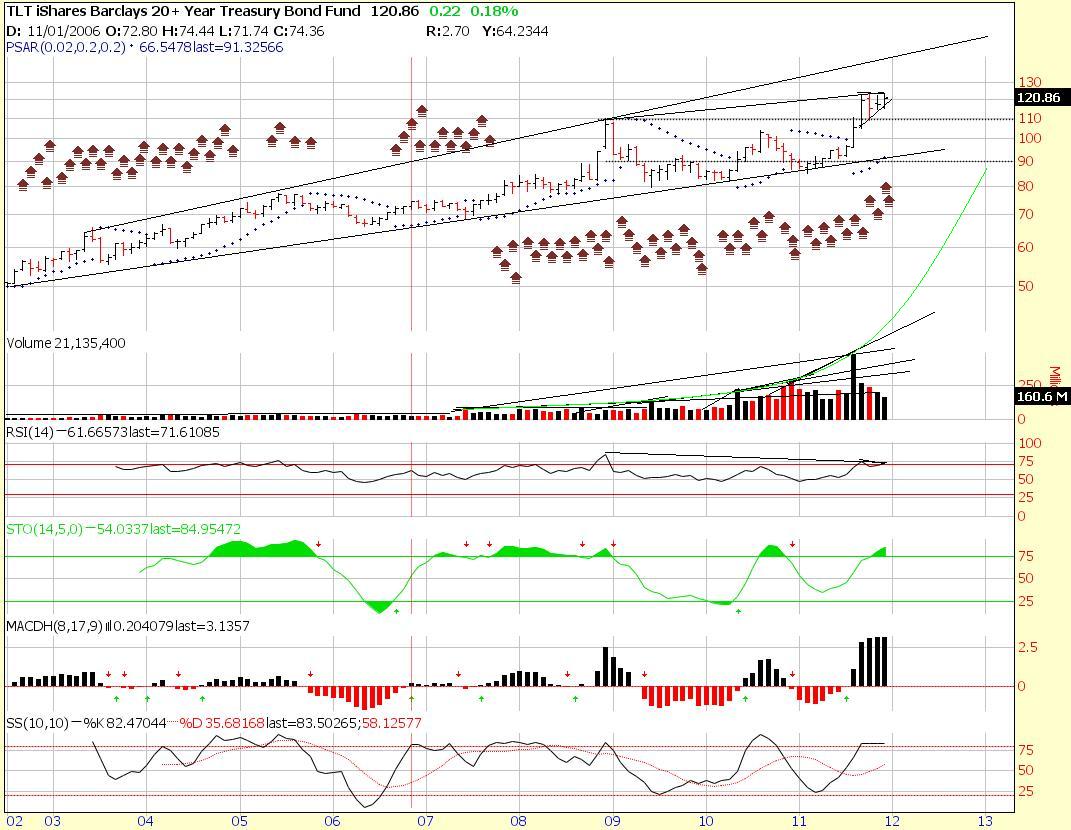 Treasury all time lows hit on a monthly close below 1.94 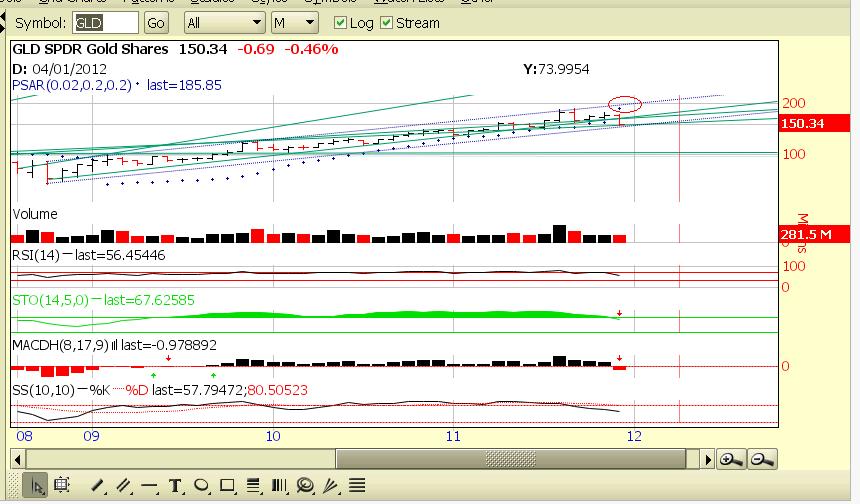 Don’t get me wrong, gold has sold off significantly already, it never made a parabolic move as it stayed within it’s trend channel, and still might… I am not exactly ready to bet heavily against it, but with the deflationary scenario we face, and all the buying pressure that has occurred in gold over the last 10 years, don’t tell me it is immune and isn’t at least vulnerable to a constructive correction here.

2012 is such a significant year. The euro could finally collapse, because skyrocketing yields will lead to budget shortfalls, riots occur when they even talk about austerity, now they implement it, costs of entitlements around the world hit as the baby boomers hit retirement age and more start to get social security checks. Austerity measures will take place and government will lose control of the people in Europe.The capital flow into the US will seem like everything is great as US treasury yields will potentially go even lower in one final run, as tlt goes parabolic, but then what? More people are buying treasuries than ever, but that buying pressure cannot continue forever. The time to own treasuries would have been over the last 30 years when your yield was over 10% when treasuries outperformed stock in what seems to be a very atypical result. The time to exit gradually is now, particularly into a strong move upwards and a panic in Europe. The time to short treasuries may finally arrive, particularly near TLT 140.

I believe a major buying opportunity will arrive, maybe as early as June, maybe not until 2013. Particularly in real estate.