Looking over my port, things could be worst. My PII purchase was ill timed and I took a quick 5% haircut. If the PII doesn’t get its act together come tomorrow it’s gone and will serve as a pie to the face. In this market, it’s death by a 1000 paper cuts when you’re marauding into and out of stocks all fast and savvy unless you cut out the bad habit trades. Hit yourself with the newspaper, bad dog.

RGLD is coming into my sweet zone and I will be adding some today or tomorrow.

I choose the path of selective ignorance, and will at the least play for a mean reversion and at the most look for some coked up mystery bid into Christmas. Hope baby, hope.

Whatever, I want to own some stocks. AWK pays a sweet coupon and I’ve owned it all year. Maybe it’s boring for you to read about but nice for a stable few percentage points as shits not swinging well. I feel the same way about PAYX. The management team appears solid, and they’re letting companies outsource their bullshit HR departments. If you buy these stocks on discount (like now “ish” in PAYX case) then you collect a coupon and hopefully don’t get whacked by any capital depreciation.

The SKF is shoring up the butt-fuckery of PII and GSVC.

END_OF_DOCUMENT_TOKEN_TO_BE_REPLACED

I dumped the SDS hedge I put on Tuesday. It was some nice insurance and now I want to let my longs stretch their legs.

I want RGLD a tad cheaper, around $75 bucks, to get some more. Gold topping articles coming out again, I LOL.

WFM I wanted more of around $64 bucks, but the prospects are growing dim, and the stock is beginning to bore me. I may cut it.

I want some BWLD and I’m considering collecting the coupon on PAYX.

May a turkey adorn the tables of you and your family. 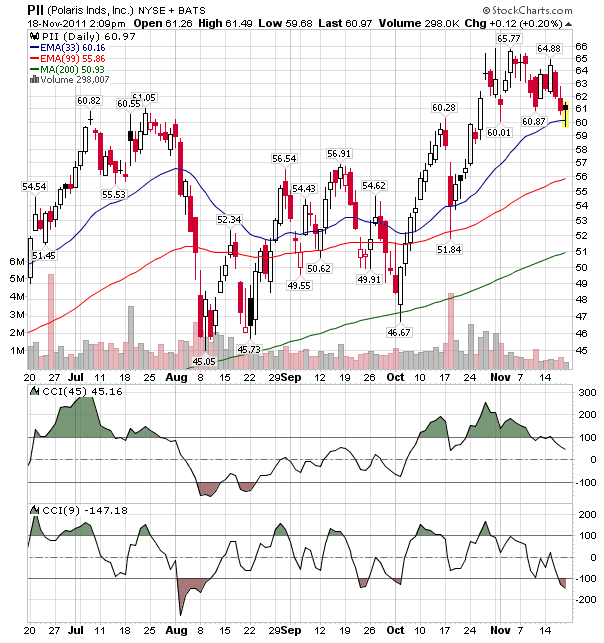 END_OF_DOCUMENT_TOKEN_TO_BE_REPLACED

Put Some SDS On

Euro dollar weakening, VIX holding 30, and I chased a little RGLD, which is fine considering my first buying tranche was swing low and my average cost is high $67’s.

I still want some $62 WFM. I won’t hold my SDS into next week unless things get ugly.

END_OF_DOCUMENT_TOKEN_TO_BE_REPLACED

Truth be told, I drive too fucking much.   Fact: daily commutes damage the psyche.  However, I used to be a chauffeur and find a certain ‘sport’ in navigating a familiar route.   Trends emerge.  A left curve on the highway may be harmless at lunchtime but leads to hysteria come six.  You see it 700 days in a row but your route stays unchanged.  I toil the nuances in my brain and feverishly use all sensory inputs, analyzing collective overreactions, damning civil engineers, and listening to music with egregious beats per minute.  In the end I get to point B.  So do you.  But did you stop to consider brake light contagion spreading into an otherwise clear lane?

In my case it is clear daily commutes have no adverse effects to the human psyche.

RGLD sits on the precipice of a lovely pullback.  I want more RGLD.  I want that shit on a belt buckle, RGLD in Old English.  I want to hold out for $75 and I still think the following volume cave deems necessary some back and fill action: 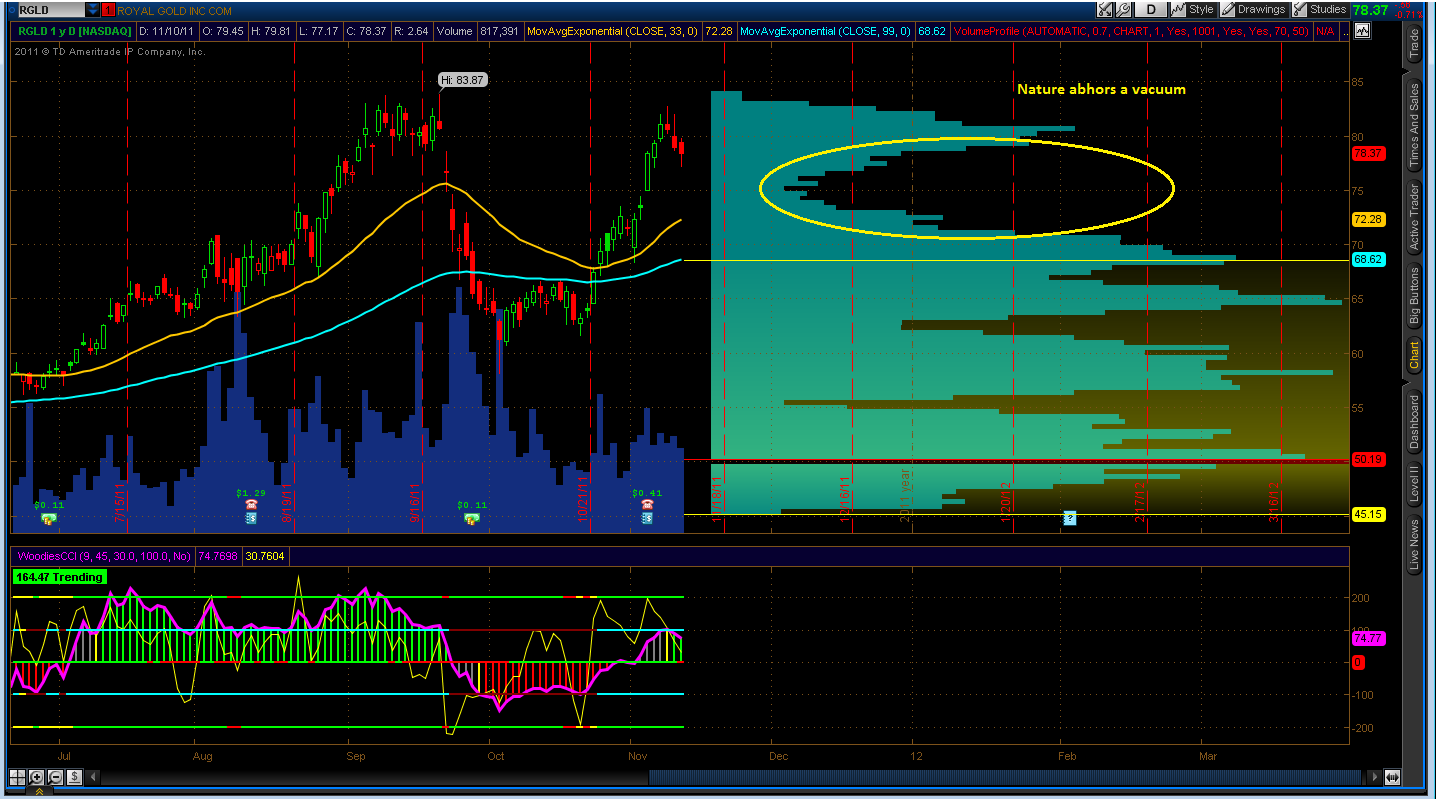 But I may have no choice but to buy more.  The fucking turkey is already in the freezer.  Magic 105.1 is blasting out holy X-mas jams by J.Beebs.  And buyers sopped up lower prices today with their poisonous exploding can biscuits.  Are you listening to pagan Christmas music yet?

END_OF_DOCUMENT_TOKEN_TO_BE_REPLACED

RGLD keeps running like a beast.  We all want a pullback.  I initiated my position October 4th, a.k.a. swing low sweet mother fucking chariot.  The buyer’s sharp rejection of a high volume node and a distinct hallway encounter lead to the purchase.  I immediately reported my dip into Mr. Gint’s well as any humble guest would:

I marked up the below chart with what I see as price points to gobble up some RGLD and I hope to see these prices before the great feast.  Click the chart to enlarge and read my tiny but witty yellow font commentary: 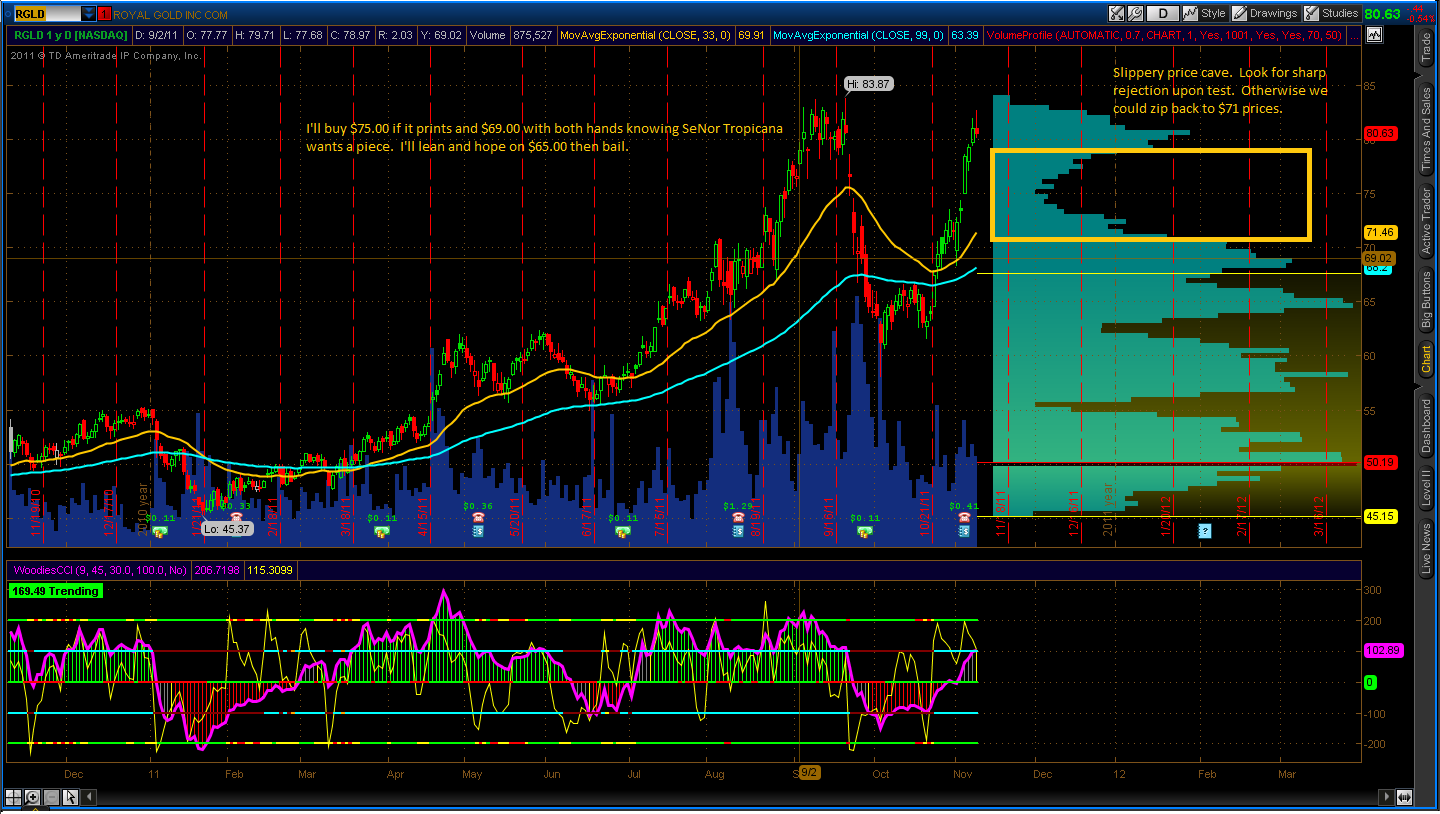 Also, I drew a rectangle on a chart earlier today explaining where I want to buy more WFM.  Here are my additional thoughts: 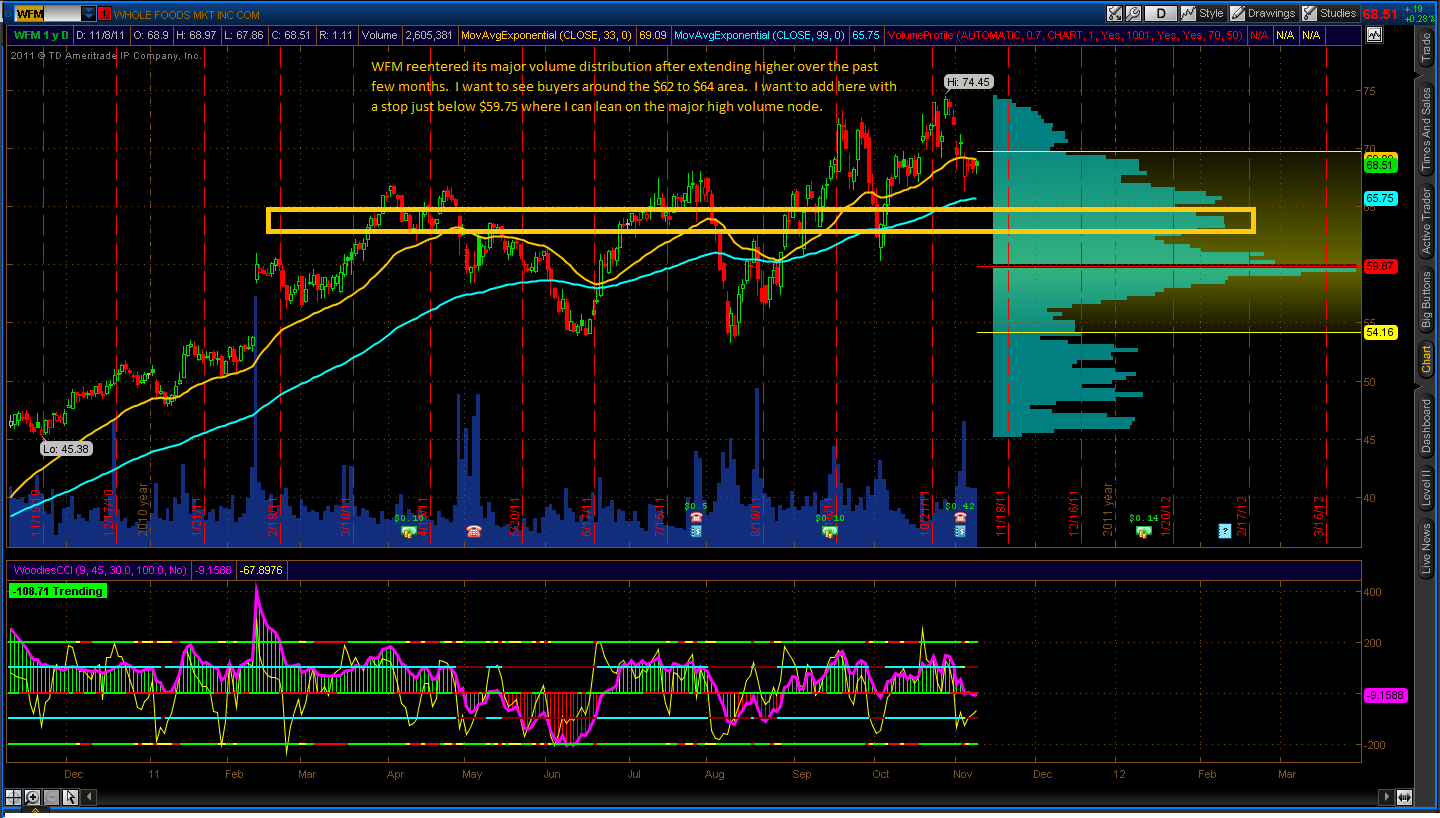 END_OF_DOCUMENT_TOKEN_TO_BE_REPLACED

No Thanksgiving Rally for WFM

WFM’s grocery aisles are humming with activity as preparations begin for the upcoming mass Thanksgiving consumption, but the stock price is still too rich.  It needs to be reduced.

I want more shares, and I will look for buyers to show interest as noted on the following chart: 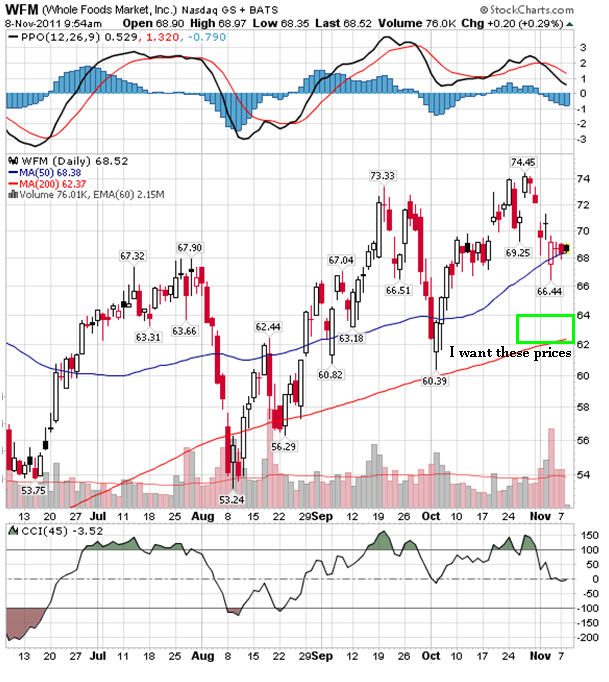 END_OF_DOCUMENT_TOKEN_TO_BE_REPLACED

Dick Holder Getting The Shaft

JEF halted…carry on, carry on!

END_OF_DOCUMENT_TOKEN_TO_BE_REPLACED

WFM announced earnings this afternoon beating analyst estimates by a penny @ $0.42/share.  Meanwhile they’ve managed to grow same store sales 8.7% during a fucking economic shit storm, lending a hand to the consumer polarity argument.  Not good enough.  Shares are down $5.00 afterhours.  Apparently investors are pissed the company did not pass through enough food inflation.

I like WFM because it’s growing and exploiting the health and wellness infatuation trend.  People who care to give a fuck (what?) don’t want corn fed beef, instead they want said beef walking around the prairie munching grass and weeds.  Mr. Gint will give you the skinny on GMOs being a gift to your grandchildren, but I prefer my beef avoids confinement to a feeding stall.  I also like the attrition.  So many of my friends who’ve been otherwise unemployable take pride in their tenure as WFM bagging clerks.

The increased dividend concerns me.  What the fuck management?  You can’t find the next group of LULU babes jonesing for feel good blueberries?  As an investor I don’t want WFM to give me a dividend, but to grow!

I still like the company in the intermediate term.  WFM is strong in a bitch of a consumer segment.  I will use a pullback to increase my holding.

END_OF_DOCUMENT_TOKEN_TO_BE_REPLACED

THE REVOLUTION HAS BEEN POSTPONED UNTIL MAY 21

Goodie, let the line I drew on my charts breach so the “I told you so” pricks can crawl back out. Good evening twitter commentary will follow.

Most of my companies announce earnings this week.  WFM will crush.  Can you believe they’re opening a store in downtown Detroit?  You probably can’t because you’re afraid to hustle hard on the boulevard.  But let me assure you, if WFM’s management sniffed out the dirty D’s golden grocery opportunity, they’re fighting the good fight nationwide.