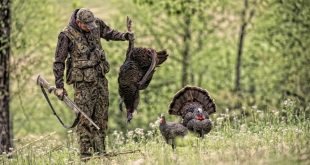 Crypto swoons on rumors about this tweet from Coinbase CEO Brain Armstrong:

Last week we heard rumors that the U.S. Treasury and Secretary Mnuchin were planning to rush out some new regulation regarding self-hosted crypto wallets before the end of his term. I'm concerned that this would have unintended side effects, and wanted to share those concerns.

The Financial Action Task Force may be imposing Travel Rule regulations sooner than later. This could mean a lot of things but the short version is in addition to KYC you may need to show proof of funds on HOW you acquired any crypto you already own. That will be a mess, but it’s not so different than traditional finance regulations. The catch is, imho, it’s easier to hoodwink fiat institutions than to fool anyone about how you acquired your coins on a publicly auditable global ledger. But that’s only an issue for those with something to hide.

For the technical folks, I imagine you may be required to register a KYC linked pubkey with your exchange. Then you will only be able to withdraw to addresses generated from the pubkey. You’ll be legally compliant but the tradeoff is you are fully visible to the exchange and likely the IRS.

Again, this isn’t so different from banks.

Worst case is laid out by Ian Grigg here:

Bc of how compliance & regs work, this will drive a barrier between on-exhcange crypto and off-exchange crypto.

It will be one or the other. Fork.

The above scenario is much more draconian. The Travel Rule potentially forks Crypto and taints any coins that are not cleared by exchanges. Owning your own keys becomes criminal. This probably won’t happen but no one knows.

Many BSV wallets already include the ability to sign transactions and/or prove identities. Example: 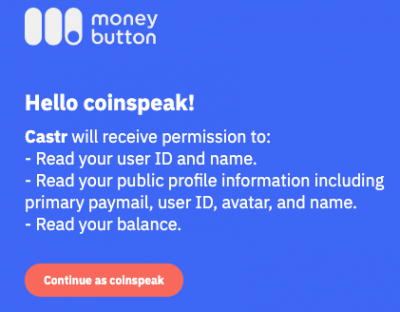 This embedded KYC feature is simple but surprisingly novel in today’s crypto world because most Coin value propositions include avoiding banks, taxes and government oversight. Reality is often disappointing and I think a lot of crypto is about to be very disappointed.

END_OF_DOCUMENT_TOKEN_TO_BE_REPLACED

Like the PreCogs in Minority Report, I am reporting a murder.

The murder will take place sometime in 2021 and the victim will be Tether. The murderer will be the US Government. The motive, this weekly chart of ~15B of Tether created out of thin air with no USD backing: 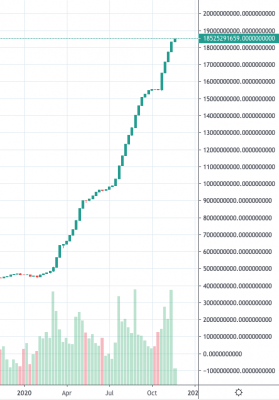 The resolution of Tether’s money printing is going to be a shock to the system.

I have a Fear and Greed indicator that has been very useful in bubble assets. This indicator has called tops and bottoms in BTC, ETH, XMR and TSLA.

This indicator produced this signal in January when BSV was under $90:

If only there was someone who was sharing buy signals on BSV when it was under 100.

Another variation, sell 25% whenever a colored line is crossed. Buy under the white line with yellow candles. Current signal, sell 25% of BTC:

Here is the Fear and Greed chart for BSVUSD: 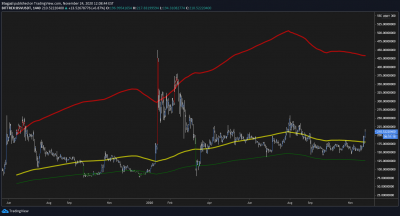 END_OF_DOCUMENT_TOKEN_TO_BE_REPLACED

The USA is in day 2 of an election that may end up being decided by the Supreme Court.

In my opinion, the election is a good news / bad news scenario.

Whoever loses, that’s the good news.
The bad news is the other guy won.

I was struck by the mundane items that were on the California mail in ballot. In total the ballot addressed spending a few billion on very forgettable propositions while the Federal Reserve is printing Trillions.

It’s all an illusion of Democracy while the Federal Reserve and Military Industrial Complex pillage the wealth of the Nation.

Bitcoin can be used to enable every person on earth to vote on any topic in real time with 100% integrity. Think about what that would make available.

This is just one use case of an unbounded Bitcoin. The future is coming.

END_OF_DOCUMENT_TOKEN_TO_BE_REPLACED

$1 BILLION IN BTC ON THE MOVE

There is a BTC wallet that just moved ~$1 Billion USD. Here’s the address and the search results for BTC, BCH and BSV from blockchair.com: 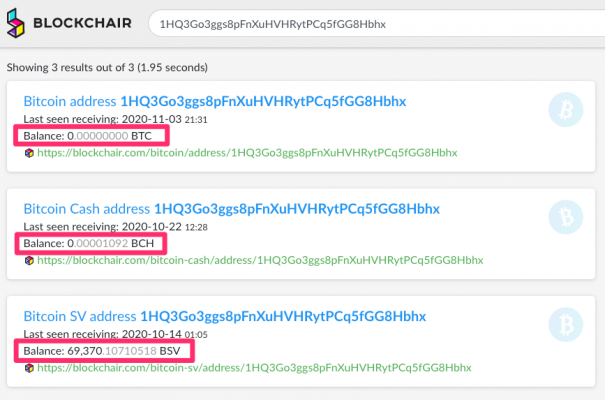 Due to the age of this address the owner has coins on BTC, BCH and BSV.

These transactions are only a few hours old but so far the BTC and BCH have moved while the BSV is still held in place.

What does that tell you?

EDIT: the BSV has moved. https://whatsonchain.com/address/1HQ3Go3ggs8pFnXuHVHRytPCq5fGG8Hbhx