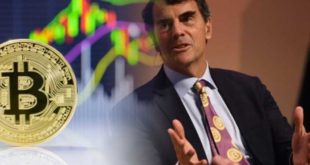 Viewing the information for the upcoming CoinGeek Toronto Conference I noticed that Tim Draper is listed as a keynote speaker.

Tim Draper heads a VC firm that was an early stage investor in Hotmail, Skype, Tesla and many others. Draper also bought the Silk Road Bitcoins that US Marshalls auctioned off years ago and made huge returns.

In addition to that background Tim has been a Bitcoin bull for years. First, he correctly called the $10k Bitcoin price and date very nearly on the button (video below) and he’s been steadfast in his prediction of Bitcoin at $250k.

Now, let me ask you, the reader; does a man like Tim Draper sign on to be a keynote speaker for BSV while still holding BTC? Maybe. But I’d strongly assert he’s at least balanced his portfolio if not dumped BTC for BSV.

VC’s are smart. They are the opposite of dumb money. They are not part of the herd. VC’s do their homework. Well, homework is done and it looks like the answer Draper is coming up with is: BSV.

I’ve written before that BSV is the opportunity to buy Bitcoin for cheap ahead of the VC’s and the Street. You can doubt my investing credentials but do you doubt Tim Draper?