Economics in One Lesson 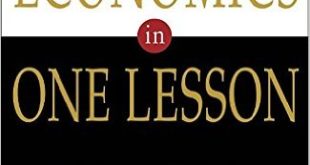 Economics in One Lesson, written in 1946 by Henry Hazlitt, is an excellent book. From Chapter 1:

Doesn’t everyone know, in his personal life, that there are all sorts of indulgences delightful at the moment but disastrous in the end? Doesn’t every little boy know that if he eats enough candy he will get sick? Doesn’t the fellow who gets drunk know that he will wake up next morning with a ghastly stomach and a horrible head? … do not the idler and the spendthrift know, even in the midst of their glorious fling, that they are headed for a future of debt and poverty.

Yet when we enter the field of public economics, these elementary truths are ignored. These are men regarded today as brilliant economists, who deprecate saving and recommend squandering on a national scale as a way of economic salvation; and when anyone points to what the consequences of these policies will be in the long run, they reply flippantly, as might the prodigal son of a warning father: “In the long run we are all dead.” And such shallow wisecracks pass as devastating epigrams and the ripest wisdom.

Sound familiar to anyone?

Here’s the One Lesson Hazlitt shares in Chapter One and then illustrates through the rest of the book:

The art of economics consists in looking not merely at the immediate but at the longer effects of any act or policy; it consists in tracing the consequences of that policy not merely for one group but for all groups.

The gist of the book is that economic policies are enacted to fix or change something. That is the visible side of the policy eg., the public works project to provide jobs visibly shows jobs and a bridge as a result. Why almost all policies fail is that there is an invisible side of every policy, a side that takes critical thinking to discover as the impact is higher taxes and lost opportunity for all industries not in the bridge building business.