END_OF_DOCUMENT_TOKEN_TO_BE_REPLACED

A Week Sent From the Gods

No need to wrap up the week. I made Godly trades, putting my year to date gains above 30%.

Do not wonder how I manage to win, with great accuracy.

Just remember, “The Fly” wins all the time, even when he loses.

April results feed rally in FED shares as smaller balance of 30-89 day delinquent loans and deceleration in NPA growth likely drives some shorts to cover.
However, weakness in CA housing market and expectations of climbing credit
losses continue to warrant further discounting of valuations. Risk of increased
regulatory scrutiny remains our largest near-term concern as higher NPA levels
(now at an estimated 67% of core capital) along with the lack of significant
franchise value could prompt a highly dilutive capital raise.

Maintain Sell rating
NPAs rise at a slower pace while delinquencies fall
The balance of non-performing loans increased an estimated 11% from Q1 levels.
NPAs now equate to 6.85% of assets vs. 6.20% in Q1 and above our 6.75% Q2
estimate. 30-89 day delinquencies fell 9% to $248M. While the deceleration in
NPA growth and the smaller delinquency levels are positive notes, we caution
investors from viewing this as a turning point for credit as the bulk of recasts are
still well in front of FED. Notably, FED anticipates recasts of $606M in â€™08, $685M
in â€™09 and $1,690M thereafter. We anticipate that the later recasts will largely be
comprised of the higher risk â€™05 and â€™06 vintage loans recasting in â€™10 and â€™11.
Margin compression continues
FED reported an effective net spread for April of 2.80%, 21 bps below March
levels and 5 bps below our Q2 NIM estimate. The decline was driven by a 20 bps
reduction in average loan yields. FEDâ€™s average funding cost fell 16 bps as the
balance of higher cost wholesale deposits declined, replaced with more favorably
priced FHLB advances. We are maintaining our NIM expectations for Q2 of 2.85%
as we anticipate FED to gain further funding benefits from lower short-term rates

END_OF_DOCUMENT_TOKEN_TO_BE_REPLACED

Disclaimer: If you buy FTK because of this post, an egregious cyclone or tornado will wipe out your bullshit town. And, you may lose money.

END_OF_DOCUMENT_TOKEN_TO_BE_REPLACED

Stupid is Getting Blown Out

To hell with SIX. Is CNBC out of their cotton picking minds, having the asshole from SIX on their show?

Mostly everything is being taken to the woodshed, as the “WOODSHEDDER TOP” settles in and becomes known. Keep in mind, “The Fly” is banking coin with flawless proficiency.

There are some pockets of strength, like QCOM, BUD, FMX, ZEUS and CHU. However, for the most part, stocks are getting “mushroom clouded,” with extreme vigor.

Even with oil north of $130, energy stocks are unable to rally, due to mass liquidations. The few that are up, are degenerate OTB plays, such as LNG, GGR, IVAN, MXC and BPG.

Now, if you’re into going against the herd, now is the time to get long financials, since it makes no sense. If I had to pick one, I would buy LAZ, BAP or GS (I realize that was more than one. Fuck you for noticing).

RIG is getting into oversold territory. If that fucker prints $145, I am in with both hands.

Bottom line: The market is going down, because it is supposed to. The Guy Adami’s of the world have been out of control stupid, over the past two months, buying bullshit in a bad economic environment. My guess, before the end of summer, the market will break new lows and proceed to enrich “The Fly” with massive amounts of coin.

END_OF_DOCUMENT_TOKEN_TO_BE_REPLACED

A Special Message From Your Government 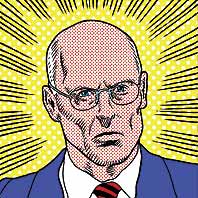 Assholes. You will be happy to know, you will all be killed this weekend.

END_OF_DOCUMENT_TOKEN_TO_BE_REPLACED

I apologize for the “Ducati-like” copy and paste. But, it’s my birthday. I can do whatever the fuck I want—even throw books at the asshole construction workers down below.

HEARD ON THE STREET

With Lehman Brothers Holdingsâ€™ second quarter set to close next week, the Wall Street firm canâ€™t seem to put questions about its fiscal first quarter behind it.

Back in mid-March when the bank reported, Bear Stearns had collapsed the day before and Lehman was in the marketâ€™s cross hairs. Lehman posted a $489 million profit, calming investors. But ever since then, investors have questioned those numbers, asking whether the profit was due to some one-time, unrealized gains.

Those questions became more intense on Wednesday when David Einhorn, manager of hedge fund Greenlight Capital gave a critique of the earnings in a speech to a room packed with high-profile investors. Lehmanâ€™s shares fell 2.7% Thursday as word of Mr. Einhornâ€™s speech spread around Wall Street.

Mr. Einhorn, who is well respected for his detailed research, is short, or betting against, Lehmanâ€™s stock.

In his comments, Mr. Einhorn squared off in particular against Erin Callan, Lehmanâ€™s chief financial officer and the executive who has led the public charge against the firmâ€™s critics. Mr. Einhorn met with Ms. Callan last week to discuss his research.

In a statement, a Lehman spokeswoman said: â€œWe will not continue to refute Mr. Einhornâ€™s allegations and accusations. Mr. Einhorn cherry-picks certain specific items from our quarterly filing and takes them out of context and distorts them to relay a false impression of the firmâ€™s financial condition which suits him because of his short position in our stock. He also makes allegations that have no basis in fact with the same hope of achieving personal gain.â€

In attacking Lehman, Mr. Einhorn took issue with large, unrealized gains the firm booked in the first quarter from marking up equity positions that donâ€™t trade in public markets. Like other brokers, Lehman has large amounts of illiquid assets that it values using management-driven financial models.

In the quarter, Lehman said it had a pretax gain of $695 million related to hard-to-value equities. In the previous four quarters, the average, unrealized gain from such holdings was $69 million.

The $695 million is a net number made up of roughly $1 billion of gross gains and offsetting losses, according to Lehman. The $1 billion included an unrealized gain from writing up the value of an equity investment in an Asian power company, which the firm declined to name.

In his speech, Mr. Einhorn said the company was India-based KSK Energy Ventures and that Lehman told him it booked a $400 million to $600 million gain on KSK in the first quarter. The manager said Ms. Callan told him Lehman marked up its holding because a new investor had taken a stake in KSK at a valuation above Lehmanâ€™s.

Ms. Callan said this other investment was part of a financing round in anticipation of an initial public offering, according to Mr. Einhorn. After Mr. Einhorn further questioned the valuation process, he says Lehman changed its story.

Lehman emailed him, he said, saying the firm had revalued its KSK stake based on an â€œexpectedâ€ pre-IPO financing as well as other factors.

In his speech, Mr. Einhorn also questioned the values Lehman put on many other financial assets. In particular, he said Lehman hadnâ€™t sufficiently written down $6.5 billion of complex debt securities called collateralized debt obligations, or CDOs.

He added that these holdings were only recently disclosed, even though other banks and Wall Street firms disclosed similar holdings months ago and took massive write-downs on them.

Mr. Einhorn noted that write-downs taken by Lehman in the first quarter on the $6.5 billion of CDOs were only about $200 million. Yet, in an April filing about the first quarter, Lehman disclosed that about 25% of the CDOs were rated BB+ or lower, which is a junk rating.

â€œI asked them how they could justify only a $200 million write-down on any $6.5 billion pool of CDOs that included $1.6 billion of below-investment-grade pieces,â€ he said. He added that Ms. Callan declined to explain the size of the write-down, but she added that â€œLehman â€˜would expect to recognize further lossesâ€™ in its second quarter.â€

Einhorn is exactly right. I have no interest in covering my short.

END_OF_DOCUMENT_TOKEN_TO_BE_REPLACED

Disclaimer: If you sell short FED because of this post, Lehman Brothers will report another stellar quarter. And, you may lose money.

END_OF_DOCUMENT_TOKEN_TO_BE_REPLACED

The Gods Have Blessed Me

Here we go again. The fuckers on CNBC are getting agitated by the market decline. My neighbors are in grave danger of losing vast sums of retirement savings. And, “The Fly” is on the verge of “double greatness.”

All of these things are natural occurrences of life, let alone the blogosphere.

Look you, I’ve got so many wins—Willie Randolph just called me and asked for one. As always, I told him to go fuck a horse, then proceeded to send someone to punch his mustache off.

Oil is melting higher, yet oil stocks are lower. The reason: source of funds.

Fund managers are blowing out of positions, regardless of fundamentals, like what happened in early January. Ultimately, as a result of the distribution, there will be great bargains.

Just know this: fuckers want out of this market in the worst way. They need to de-lever and will sell anything to raise cash.

The breakdown in the banks/brokers is telling. My “reverse four horsemen” are tanking, which includes: CORS, FED, DSL and FHN. Throw WM in there for good measure. A bonus, if you will.

On the brokerage side, I’m making professional athlete money in short MER and short LEH.

Within the ag space, POT, MON, MOS and all of the other absurd farm stocks are being pressed, then shot.

CHL and LFC are being deballed, leading to big dicked gains in FXP.

However, I must say, with everything going on, I am not content. That bitch of a whore, FTK, should not be down. It vexes me.

On the bright side, it is my birthday. As a result, “The Fly” will have an extraordinary day.

It has already been written.

END_OF_DOCUMENT_TOKEN_TO_BE_REPLACED

Oil is for winners.