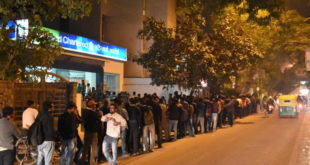 India’s efforts to root out graft and corruption has resulted in a massive collapse in the economy. For the moment, naturally, markets are ignoring the horrific backdrop of a mess of a country without currency — which has resulted in lines at banks that stretch for as long as the eye can see. A total and complete mess.

Goldman is out with a note saying GDP will grind lower to 4% from the median estimate of 6.5% — spearheaded by consumer apathy — as a byproduct of the fact that people, literally, don’t have money.

Goldman Sachs took another axe to its growth forecasts for India on Tuesday, as the tremors from the government’s shocking move to ban high-value banknotes reverberate across financial markets and the real economy.

Economists at the U.S.-based bank, led by Nupur Gupta, cut their estimates for inflation-adjusted output for the fourth quarter of 2016, citing a sharper-than-initially-estimated fall in consumer sentiment and industrial production amid the demonetization drive.

They now reckon Asia’s third-largest economy will expand by a paltry 4.0 percent in the quarter, compared with a median estimate of 6.5 percent from a Bloomberg survey of 12 economists published in late-November. The latter projection, though higher than Goldman’s, is also notably weaker than a previous 7.8 percent estimate.

Goldman on Tuesday also further downgraded its outlook for the 2017 fiscal year, estimating the economy will expand by 6.3 percent year-on-year, compared with a Bloomberg median estimate of 7.3 percent. Just two weeks ago, the Goldman economists cut their 2017 GDP-growth projection by 1 percentage point to 6.8 percent, citing the potential for business disruptions in light of the liquidity shortage.

The economists’ bearish lurch this week reflects the fact that soft data and anecdotal evidence suggest the cash shortage is beginning to take a toll, a challenge that will weigh on the Reserve Bank of India on Wednesday when it meets to decide its crunch-fighting strategy.

“Given a limited quantity of new currency notes, the first few weeks since the currency reform have seen a shortage of cash, and consequently a significant reduction in consumption activity given that nearly 80 percent of overall consumption takes place in cash. Some of the impact is being mitigated by the substitution of cash with credit cards or electronic wallet payments, or with informal credit, but it is clear that the shortage of cash is having a significant impact on near-term activity.”

Clearly, the fast growing Indian economy transacting business in cash is something that is rueful by our multi-national debt slavers. Since all previous efforts to move India off the cash tit have failed, the government made sure the message was clear by one day banning money. Poof. Fucking gone, all in the name of fighting corruption.

India remains a heavily cash-based economy, meaning government reforms pose a headwind for growth. The bank noted that the country’s currency-to-GDP ratio is nearly 5 percentage points higher than the emerging market average, citing Haver Analytics Inc. On this basis, they conclude that some 60 percent of transactions in the real economy are now imperiled by a shortage of cash that will shave 80 basis points off real GDP growth in the 2017 fiscal year. They add that growth could fall lower than this base assumption if the cash crunch doesn’t improve notably by mid-February.

Nothing happening here. As you were.