I might be wrong but at least I’m honest.

And for the most part jovial. When these heckin’ bears taste some blood they really turn into some menacing fuckers.

Maybe this isn’t good enough to propel me into Miami Beach level wealth, but what I do out here works for me. I have not been trading futures this year, but I managed to scrape a few bucks off the streets just hustling. Sofa king shameless. There is nothing glamorous about what I do on a day-to-day basis.

I am oldt. The beard greys have started to creep up off my chin and into ma cheeks. Sometimes I dig holes for two days strait, just to plant a bush.

Women pay me to do all sorts of things. These sort of gigs come easy to a chap whose handsome.

So I extracted some fiat and last week I allocated that fresh fiat to long term investments in big tech — GOOGL, FB, AMZN, MSFT TSLA and TWTR. I don’t use margin in my long term books. Using leverage is how the citadel gets you, man. Fuck that fucking order flow reading snake right in its mouth by not using margin/leverage on long term accounts.

I will get back to working futures soon. Few understand that the skill set I possess is not something they teach at the university. The daily application of auction theory to short term oscillations in the world’s most libertarian battlefield, index futures, develops a mind over the years into a certified money extractor.

One does not simply walk away from that vocation, just as one would not abandon say the cosa nostra.

I’ve been chipping away at these markets since the turn of the millennium, and I reckon I have about 30 more years before my brain goes dull, so don’t plan on being rid of me any time soon.

Nation states are biting back at Big Tech. Beware an old tiger sensing his last fight. These draconian Chinese covid restrictions are an expensive theatrical performance to keep the west bleeding. But America has reserve status and they’re fighting like hell to keep it, fed fucking the prices of big tech stocks back into place.

But all these lines on maps and ideologies will be put to the test soon. A storm is coming. And I will side with the technocrats and their new internet coins and their big ass algorithm over any three letter organization.

The battle for the hearts and mind of the west comes down to one thing. Who owns Twitter?

And now the 385th edition of Strategy Session

Raul’s bias score 2.33, medium bear. We may see some follow-through selling early next week, but watch for Berkshire Hathaway earnings out early Monday to perhaps instill some confidence in the tape. Then watch for third reaction to the Wednesday afternoon FOMC announcement to dictate direction into the second half of the week. Then non-farm payroll data early Friday could serve to accelerate the prevailing direction into the weekend.

Modest gains Monday. Then hard selling Tuesday morning and through the close. Then buyers rallied the tape through Thursday afternoon only to see sellers return price back down to the lows Friday. 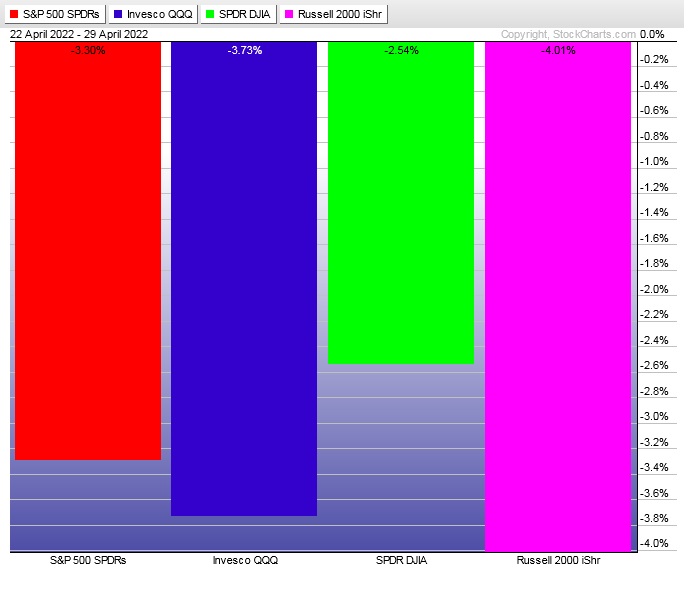 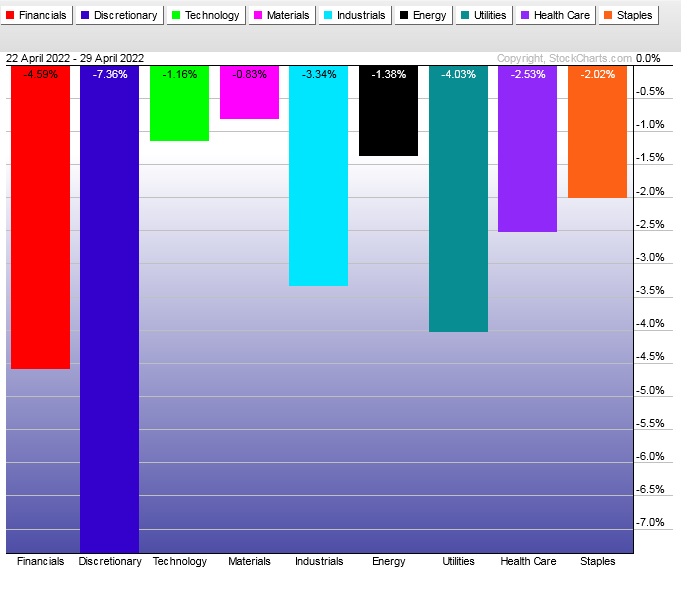 Bulls took back control of money flows seven weeks back after sixteen weeks dominated by sellers, dating back to mid-November.

But then four weeks ago sellers negated that control.

Sellers majorly dominated the money flows again last week. Ledger is skewed to the sell side.

The calendar, the moon, the cycles and the seasons

Bunker buster came and went. We don’t have that signal to lean on next week if sellers start accelerating this thing to the downside.

If sellers do accelerate then we may start to see panic hit the tape for the first time since this correction began.

We have Berkshire reporting early Monday. I expect that report to set the mood early on.

We are one week into a 12-month oversold cycle and (not that I will track it but) we had an uncommon ping on the 10-year oversold algo back on Tuesday. SPY is lower since both signals went live. Statistically, we are quite over due for a rally.

The FOMC meeting Wednesday afternoon is a live meeting, with CME fed fund futures pointing to a 97.1% chance of a 25 basis point hike to the benchmark borrowing rate. By late Wednesday afternoon we ought to have a clear idea of how investors feel about this.

Then Friday we have sort of a river card with non-farm payroll.

We are coming into a new calendar month. This first week means fresh capital flowing in from the contributions of millions of w-2 employees nationwide whose retirement is pegged to the outcome of the S&P 500.

We had a new moon yesterday and that rock keeps growing right up into the May 16th Flower Moon.

Spring is here for real in the north and people are acting wild, propelled into action by their hormones and nature’s signals.

The cycles are all lined up — we’re due for a bounce but if sellers take the initiative we could see panic. I have a difficult time forming bias with this many factors in play. Just planning to take the week one day/event at a time.

We may see some follow-through selling early next week, but watch for Berkshire Hathaway earnings out early Monday to perhaps instill some confidence in the tape. Then watch for third reaction to the Wednesday afternoon FOMC announcement to dictate direction into the second half of the week. Then non-farm payroll data early Friday could serve to accelerate the prevailing direction into the weekend. 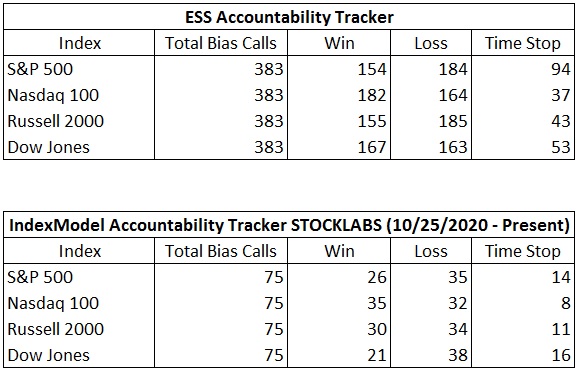 Really spending lots of time on the low-edge of balance

Transports still appear to be in balance. 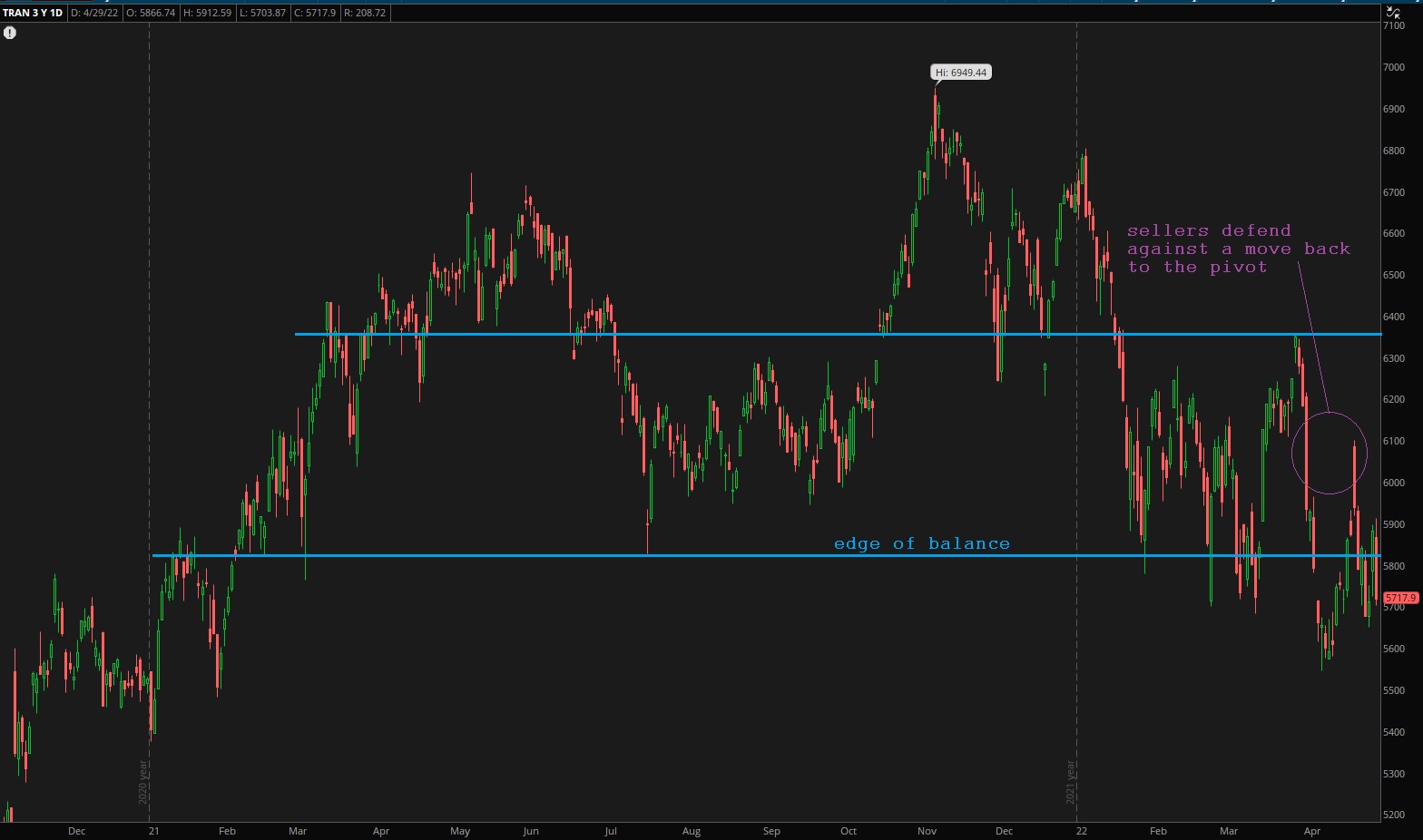 Semiconductors are sort of re-imagined this week, under the notion that we’ve been in discovery down since the start of the year and what that might mean in terms of rotations. There is still room for semiconductors to hold range and probe back higher, but the longer price lingers down here, the more likely we see another discovery down move. 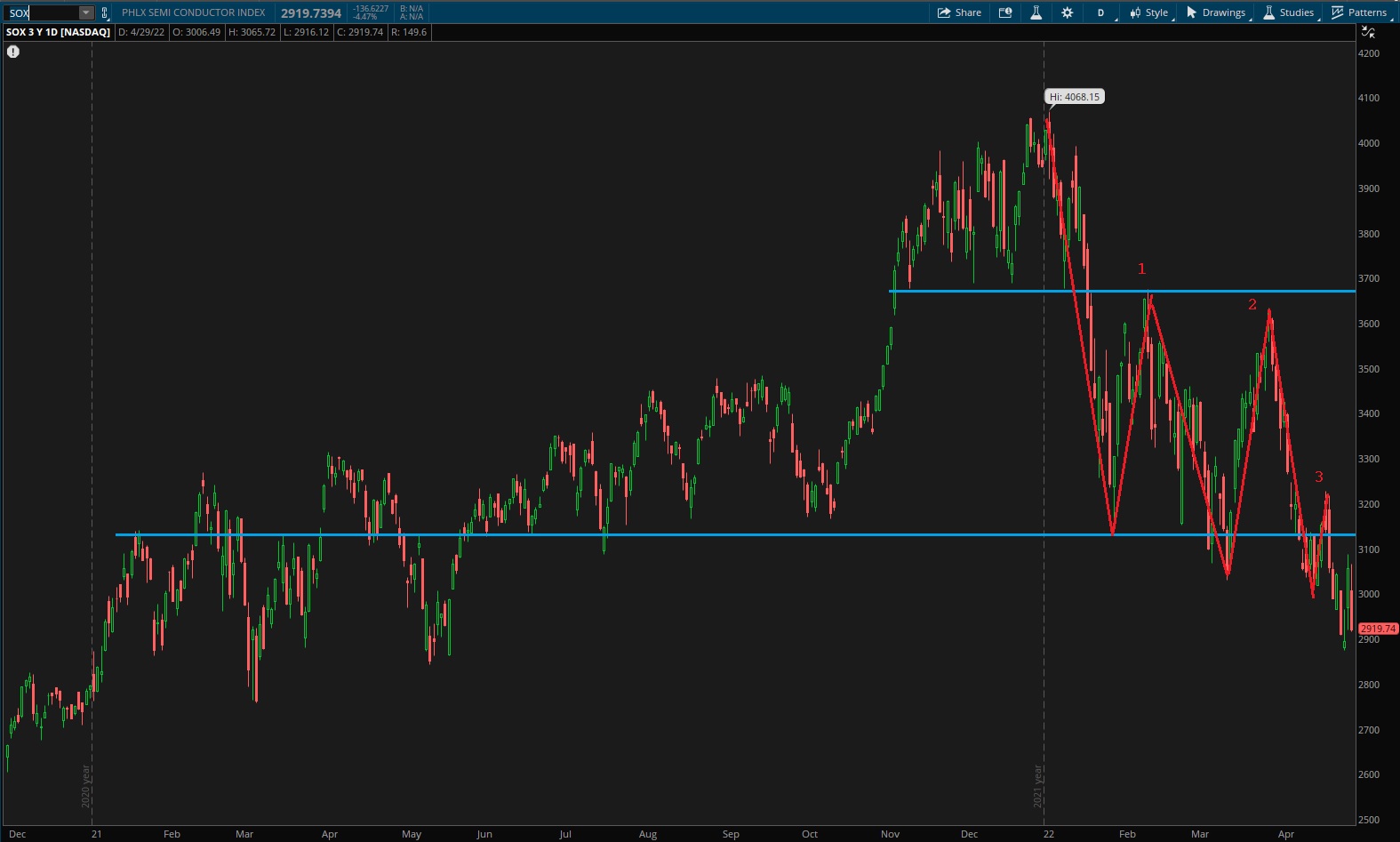 Ether sellers managed to take back the 61.8% Fibonacci retracement of that leg up we’ve been monitoring. The chart is starting to look less like discovery up, more like balance. 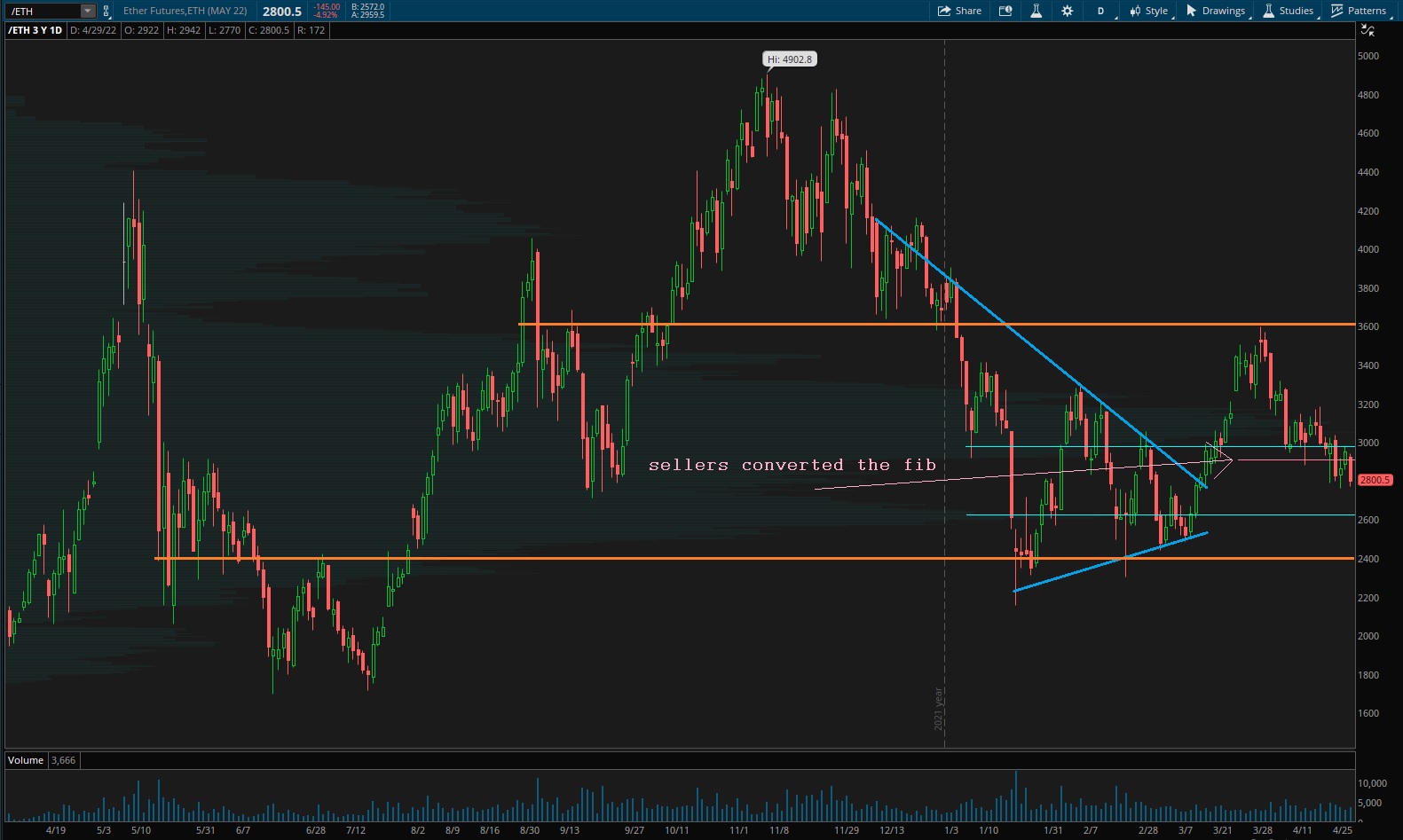 IndexModel has been firing off lots of signals and doing a decent job navigating this tape. This week’s data sort of rhymed with December 16th 2018. Back then we Bunker Bustered, then popped a bit, then the bottom fell out of the market. But eventually the uptrend resumed. Not sure if that is what happens next, just an observation from the data. 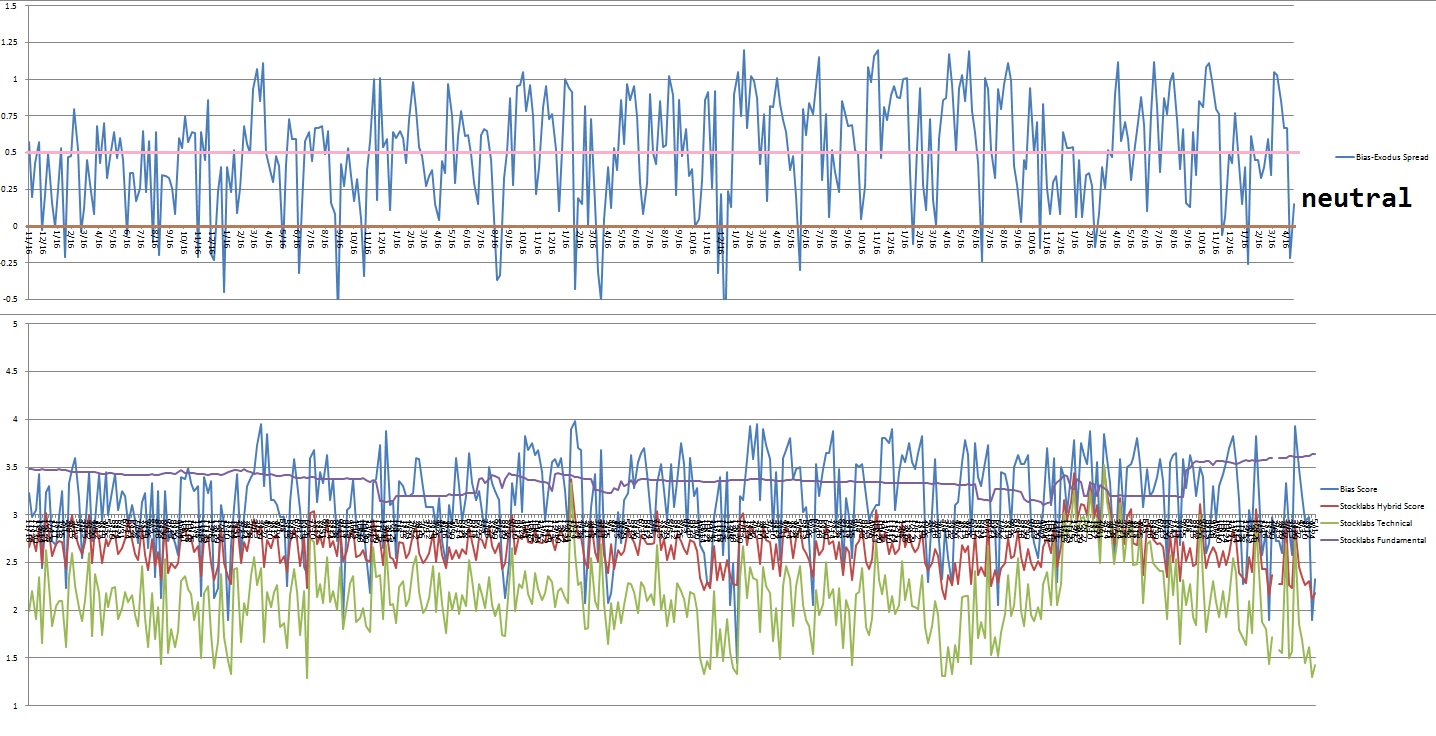 On Friday, April 22nd Stocklabs signaled hybrid oversold on the 12-month algo. This is a 10-day bullish cycle that runs through Friday, May 5th. Here is the performance of each major index so far: 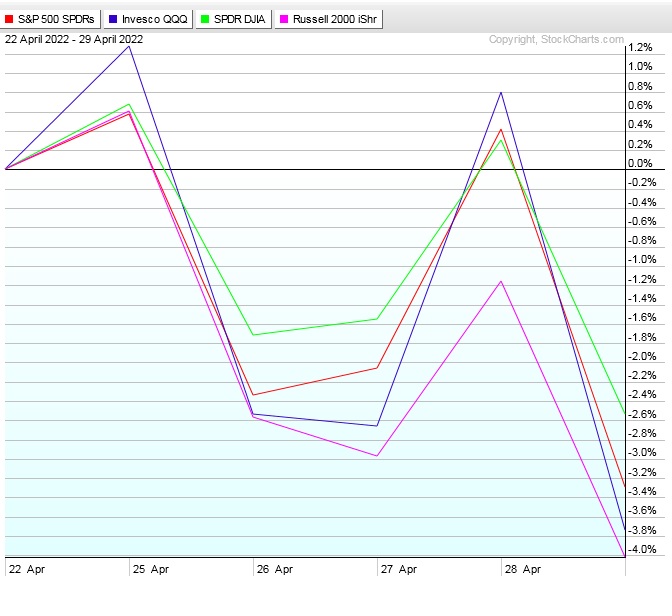 “The height of cultivation runs to simplicity.” – Bruce Lee