Trading in the Zone

I had an exceptional morning today  This was the kind of morning or trading event that I am always waiting for but don’t always come often.  It can be compared to getting a four of a kind in a poker hand that occasionally comes to your weekly poker night.  Nevertheless, this morning was the kind of morning that justified all the tiny losses I took searching for that elusive run.

“Oh boy, it is gonna be another gap up day against me!” so I thought to myself.  I had an open TZA position this morning and S&P500 was printing 4+ last night in night trading.  So, I was expecting another gap down loss against me.

Not to throw away such an opportunity to redeem myself, I was prepared to exit my TZA position if the market’s open showed any strength at all.  But this morning wasn’t about my TZA position; it was about the “wrong pick” I declared 6 days ago regarding  AMRN.  Ever since I got stop-out of AMRN last week, I had been watching every day to look for price action to give me another opportunity to jump back in.  I believe this was the morning.

Price action on AMRN before market open was printing 11.70+.

“This is it!” I exclaimed.  Because price action took out the high two days ago and was looking to take out yesterday high by a few mere ticks, I knew I had to jump back in.

“Fuck it! I’m getting out for my lunch money!”  I put the market order to close out my TZA trade without thinking much of it ’cause my attention was on AMRN.

“Holy Molly!  This baby is firing up!”  I put another order to buy a 2nd tier of my starter position.  Basically, I was doubling up.  My order got filled around $12.05.  (Usually I don’t double-up just like that but this morning AMRN price actions was unusually robust.  Perhaps it was my intuition or perhaps you would have sensed it too if you were watching the price action; but there were no denying that existence of an underlying current pushing AMRN price up.  Thus, my buying the 2nd tier was not even a struggle; it was a natural flow of action that came to me instinctively.)

“Holly Shit!”  AMRN then began to correct a bit by trading below $12.00 and bounced around $11.94 for a couple of minutes.   I knew the price action was too strong for it to tank back to base ground so I sat and watched.  As predicted, price began to take out the high of the 2nd (5 min) bar and trekked higher.

“This bull run is strong!”  I said to myself.  Then on the 4th bar, price action took out the high of the 3rd bar.

“I’ve got to buy more!”  I put in another market order for the 3rd tier position and got filled around $12.32. (The fact that the 3rd bar and 4th bar took out each previous bar high so convincingly was to me a true panicky buying spree.  I was sensing a short squeeze so I felt the urge to press on the squeeze as well; hence my buying of the 3rd tier. )

Now, I was fully aware of the profit-taking that might be coming soon but the momentum was so strong I could feel the buyers fighting to get in thru the narrow door.  So, I didn’t hesitate to add on more.  Price action again took out the high of the 4th bar and kept on moving up.  By the time price was printing $12.75, I decided to buy another small position to add on.  By then, I had 3x of my starter position and my gain was printing very nice big fat green numbers. (My buying a small position at $12.75 was to setup a psychologically trigger point for me.  I was very well aware that in a frantic day like today, I could get lost in the “rush” of event that I might forget myself.  I will explain more about this trigger point below.)

The 5th bar was parabolic!  It just kept on going higher.  When the 6th bar took out the high of the 5th bar and printed $13+, I was beyond myself.  But this was not the time to pop champagne and celebrate; this was the time to watch for the coming profit-taking.  Then it happened, a perfect shooting star pattern developed right at the end of the 6th bar.

Remember, I was still high on the rush and did not want to believe the momentum might be over.  The prudent thing to do then was to honor the shooting star pattern and took profit at the market.  Instead, I hesitated until price printed down to $12.75 which was my last filled price on the small add-on.  By then, it was a matter of keeping my profit or risk giving it all back.  I put in market order to sell 3/4 of my position and was filled b/w  $12.64 and $12.73.  Not bad for a morning hunt!  (Here it is, because of the $12.75 trigger point, I was shaken out of my emotional attachment to the momentum.  I’m sure some of you are aware how powerful this rush could be and how any prolonged hesitation could cost you dearly due to fast price action.  I set the $12.75 price action to remind me not to let current price action to fall below this price level.  One thing I learned to do from the years of trials and tribulations in the trading arena is to develop a habit in hating to see price action drop below “any” of my buy points.  This emotional event would kick me from behind to over-ride my current emotional attachment- either greed or fear.  When price fell below $12.75, I knew I had to get out and I did.  While hindsight showed price action eventually climbed back over $13+; it was not relevant “at the time” since it was not a fact that price would climb back up at the time.  We could only deal with what we know “at the time” and take proper action at the time. If price action was to climb back up after i sold, it would be another trade which I showed below.)

Then I watched.  I wanted to buy AMRN back when the profit-taking was done and be gone with.  But price action wouldn’t print lower than $12.54 and began to slowly ascend upward.  I knew then I had to jump back in if I still want to carry this trade for a longer term.  Without hesitation, I bought back the shares I sold earlier for an average price of $12.67. (I have a soft spot for the fundamental story behind AMRN.  I want AMRN to succeed so I can take this natural fish oil (albeit with high potency) rather than the Statins alternative.  I also believe I’m not the only one who wanted AMRN to succeed as a healthy alternative to Statins.  That why I want to own AMRN but only if price action would support this ownership. Yes, I’m also aware that the drug trials were based on using AMRN fish oil in conjunction with the Statins drug.  For me personally, I would take AMRN fish oil without the Statins when it is available.)

Now, with price printing $12.95 or some; I think my wrong pick did very well for me!

Below is the 5 min AMRN chart with some annotation of what I did. 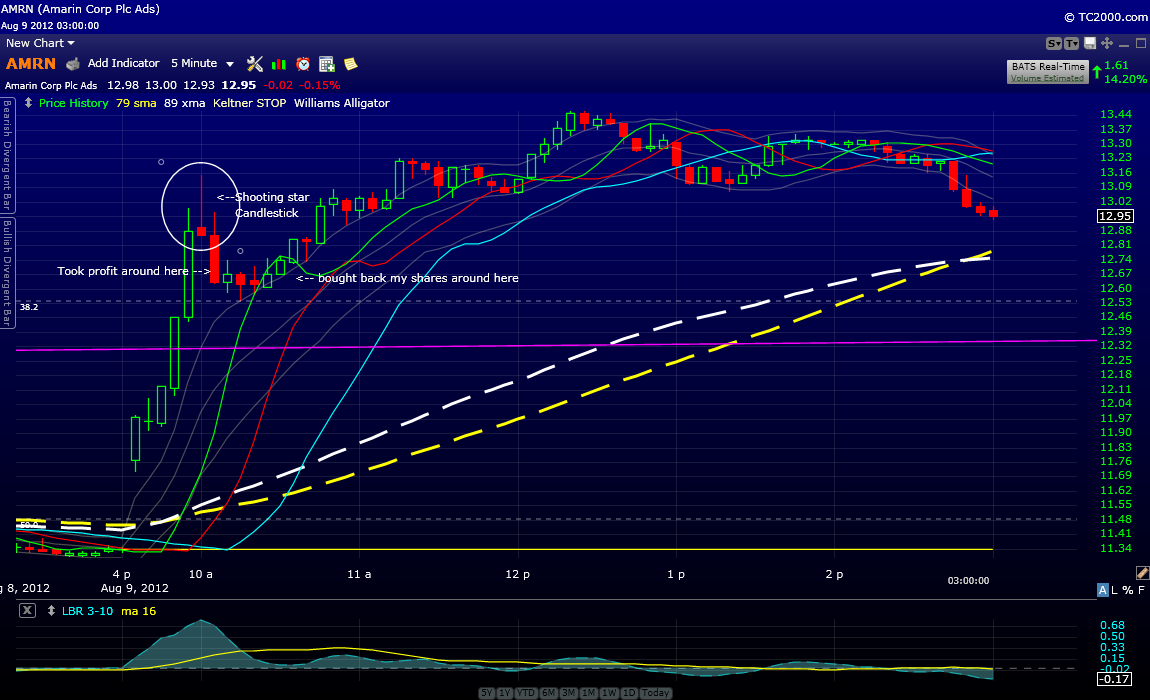 Thanks to AMRN today, my YTD gain now reached over 20%.  I was at 20% before but last Friday gap down on TZA took me back down below 20%.

(I was inspired to write with more descriptive details on my trading activities after reading some of the great works by contributors here so I decide to give it a try.  After some review of this original post, I thought it would be more helpful if I also included the reasons why I took certain action in the post.  This self-analysis will serve to reinforce my own actions and help me to evolve as a trader.

Thanks for reading if you are reading it again.)