Apparently, the bullish harami continuation pattern on my $NUGT wasn’t doing too well today.  I gave back all paper gain from yesterday and took a tiny losses for the work.  I also took a small losses on $ABX as well.

Not to be discouraged, $DUST now shows a possible bullish harami “at the bottom” of the trend with supports on the two moving averages lines.  Of course, the bullish harami will have to be confirmed tomorrow with price action taking out today close.

I bought $DUST this morning looking to see if this bet will pay off tomorrow.

END_OF_DOCUMENT_TOKEN_TO_BE_REPLACED

Usually, a bullish Harami happens at the bottom of the trend to signify a bullish reversal.  In this case, a breakout of the Friday inside bar to the upside that takes out the previous high two trading days ago reflects a bullish continuation pattern.  Since it has taken out the inside bar from Friday, I will call the candlestick pattern “the bullish Harami continuation pattern”.   Don’t bother to google it; there is no such thing.  I just make it up.  Whatever works for me, eh? (grin).

Take a look at the daily chart below.  I believe gold minings and gold is heading up.

I like to see price action takes out the recent pivot high at $13.54 established in May 9th.

Yes, I bought back $NUGT and $ABX this morning.

END_OF_DOCUMENT_TOKEN_TO_BE_REPLACED

Coming back to the old guard

$CTSH had a monster run from a low $14 to $83 from late 2008 to early 2011 before it started having hiccup over the next two years.  I believe the current hiccup has come to a conclusion and price may just be heading back up soon.

Take a look at the weekly chart below: 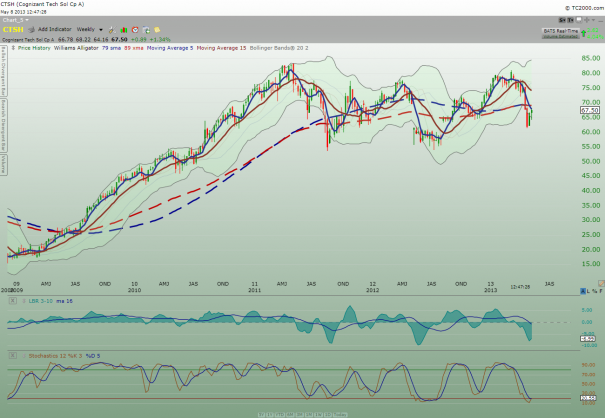 Take a close look at the weekly chart again: 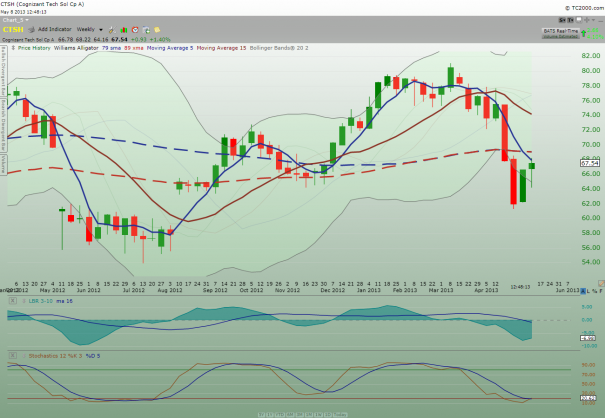 As you can see, this week may confirm the Bullish Harami weekly candlestick pattern for a bullish reversal.  Momentum indicators are also coming back up from the low point. 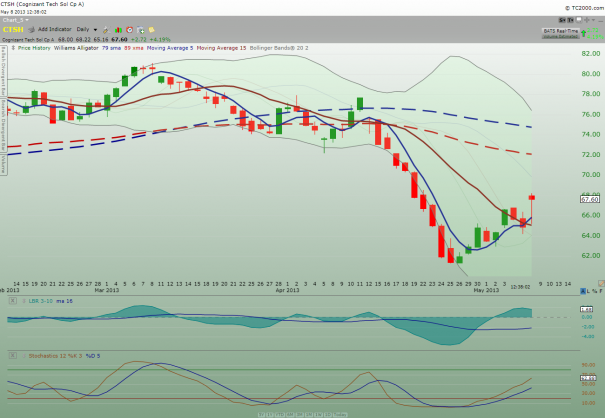 Price took off after positive earnings report and the momentum may continue with the 5 ma line crossed over the 15 ma line today.

END_OF_DOCUMENT_TOKEN_TO_BE_REPLACED 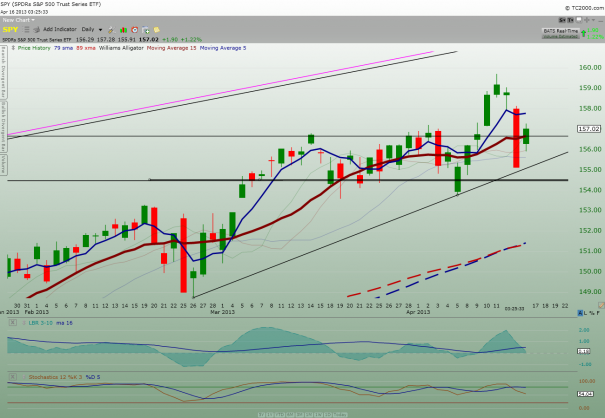