“What are you waiting for?,” you asked.

Well, I’m waiting for AMRN to blast off because a pharmaceutical company materializes to buy it out.  Sub $11 buck or $18 buck, who cares?  I am looking for $25+.  So, I’m waiting…

I’m also waiting for USU to become significant.  “Significance of what?,” you asked again.

Hey,  I didn’t know you care so much.  Thanks for asking.

Do you know there are only a few countries on this earth that have the capability to refine uranium?  USU is the only established company that operates the only U.S. owned uranium enrichment facility in the United States.  Do you think our country is going to let this little child to just die even though it is being ignored right now?  I don’t think so.  One day, some of you may regret for not buying at sub $1. Hence, I’m waiting…

LRAD, what can I say about this?  I’ve traded this baby for years and it has made me boat load of money.  Directional beam sound has its usefulness and it is my belief that eventually all law enforcement and military establishments around the globe will have one of these babies.  The only problem now is that every country is in some tight budget; so this is not a top priority purchase item.  Due to its low volume and liquidity issue, I don’t trade this one actively.  I will just wait until the company starts taking big order or become a takeover target.  Waiting away I am.

I’m sitting on a boat load of cash so I’m waiting to deploy my army.  Did I just say army?  Pardon me, I meant to say my cash.

Take a look at the weekly SPY chart below: 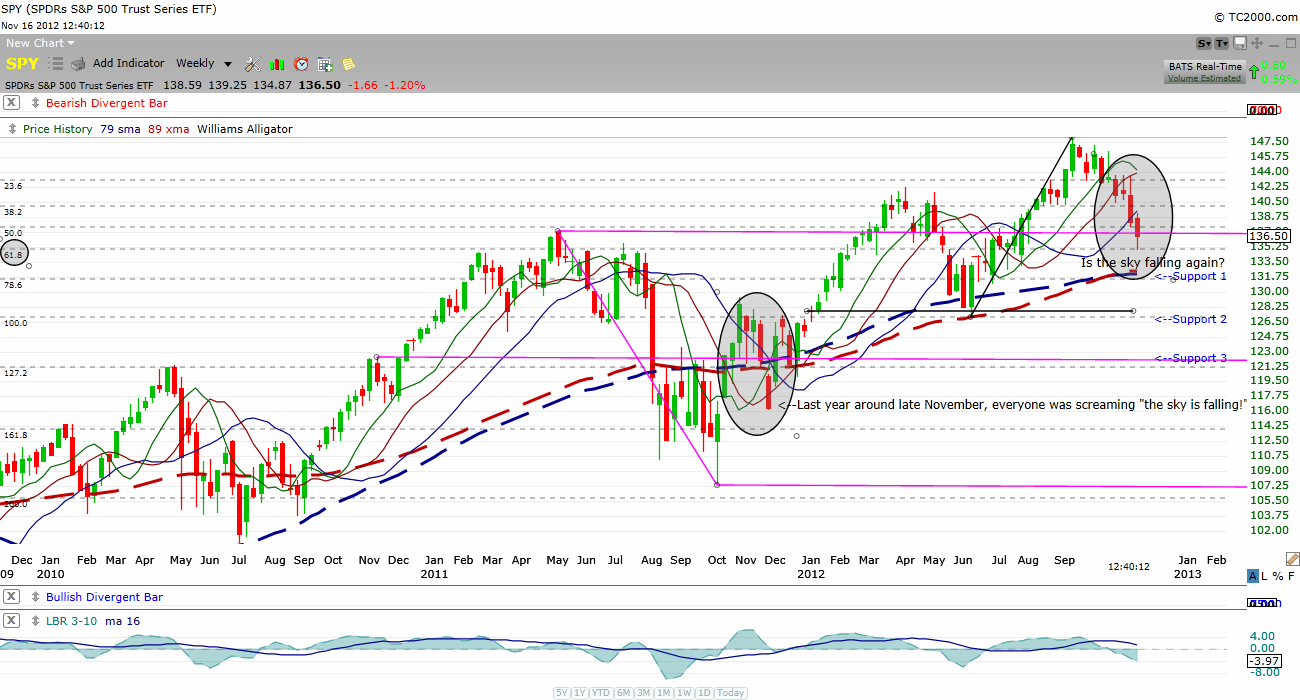 Did you see the similar pattern in November 2011?  I remember receiving comments on my November 2011 post on “catching the falling knife” implying that “the sky is falling”.  I’ve a good feeling that we are near the bottom of the correction. Did you see how this week bar touch the 61.8% retracement level? I’m deploying my army to procure some DDD and RIMM today.

Like everyone else, I’ve given back some gain but is still ahead for the year.  Perhaps, just perhaps, one of my three musketeers (AMRN, USU, or LRAD) will hit a jackpot and propels me to a stellar return for 2012.

Other than mindless conjecture on my part, I’m just waiting.

One more thing, I’ve been posting my trading activities using the comment area of my last post for the last two months and have noticed that there are some of you who read my journal.  I want to thank you for your attention.  May luck follows you as well.  Believe me, we need all the luck in this volatile market.