Federal Reserve Chairman Ben Bernanke said Wednesday the central bank will likely keep at least some of its easy-money policies going “for the foreseeable future.”

Noting that unemployment is still too high and inflation too low, Bernanke said, “both sides of our mandate are saying we need to be more accommodative.”

He spoke about Fed policies in a Q&A session after a speech in Cambridge, Mass., to the National Bureau of Economic Research.this

Bernanke rattled stock and bond markets last month when he said the Fed likely will reduce its stimulus later this year and end it by mid-2014, assuming the 7.6% jobless rate falls to 7% by then. The Fed is buying $85 billion a month in government bonds to hold down long-term interest rates.

Financial markets assumed that Bernanke’s roadmap also meant that the Fed likely will raise its benchmark short-term interest rate in late 2014, instead of mid-2015 as anticipated.

But Bernanke reiterated that the Fed won’t consider raising short-term rates until the unemployment rate reaches 6.5%.

The Fed chairman also suggested that policymakers could keep the bond-buying program at full throttle longer if the economy wobbles. While the housing market is improving and buoying consumer wealth, federal spending cuts still could dampen growth, he said. “it’s still too early to say we have weathered the fiscal restraint,” he said.

And if interest rates continue to rise in anticipation of Fed actions, hobbling the economy, “we’ll have to push back against that,” Bernanke said.

In his prepared speech earlier, Bernanke says the 2008 financial crisis showed the Federal Reserve that it must strengthen its approach to both regulation and interest-rate policies.

Bernanke says the U.S. economy has yet to fully recover from the downturn. 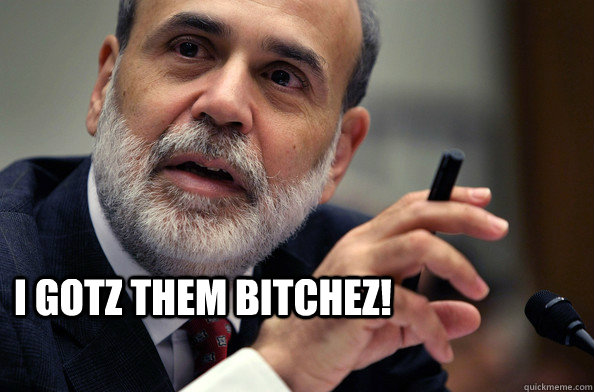 S&P futures are +15. Prepare for winship, of extreme perversion.