Code Red for the Fed: The Taylor Rate Is Now 2%

“I wasn’t the only person coming out with a book this week (much more on that at the end of the letter). Alan Greenspan hit the street with The Map and the Territory. Greenspan left Bernanke and Yellen a map, all right, but in many ways the Fed (along with central banks worldwide) proceeded to throw the map away and march off into totally unexplored territory. Under pressure since the Great Recession hit in 2007, they abandoned traditional monetary policy principles in favor of a new direction: print, buy, and hope that growth will follow. If aggressive asset purchases fail to promote growth, Chairman Bernanke and his disciples (soon to be Janet Yellen and the boys) respond by upping the pace. That was appropriate in 2008 and 2009 and maybe even in 2010, but not today.

Consider the Taylor Rule, for example – a key metric used to project the appropriate federal funds rate based on changes in growth, inflation, other economic activity, and expectations around those variables. At the worst point of the 2007-2009 financial crisis, with the target federal funds rate already set at the 0.00% – 0.25% range, the Taylor Rule suggested that the appropriate target rate was about -6%. To achieve a negative rate was the whole point of QE; and while a central bank cannot achieve a negative interest-rate target through traditional open-market operations, it can print and buy large amounts of assets on the open market – and the Fed proceeded to do so. By contrast, the Taylor Rule is now projecting an appropriate target interest rate around 2%, but the Fed is goes on pursuing a QE-adjusted rate of around -5%. 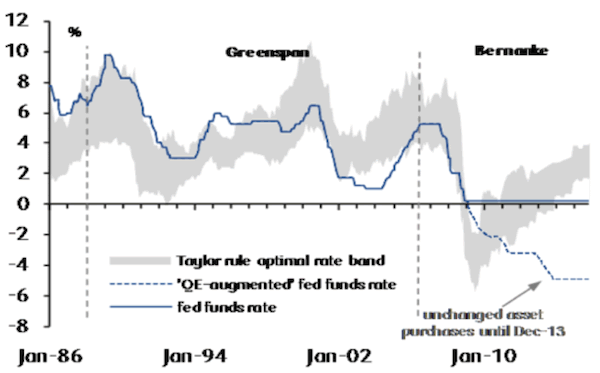 Also, growth in NYSE margin debt is showing the kind of rapid acceleration that often signals a drawdown in the S&P 500. Are we there yet? Maybe not, as the level of investor complacency is just so (insert your favorite expletive) high. 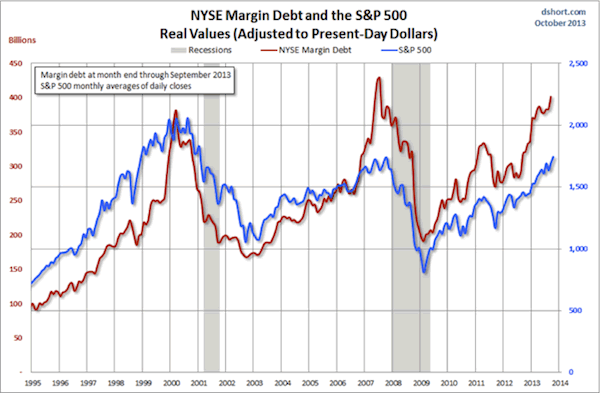 The potential for bubbles building atop the monetary largesse being poured into our collective glasses is growing. As an example, the “high-yield” bond market is now huge. A study by Russell, a consultancy, estimated its total size at $1.7 trillion. These are supposed to be bonds, the sort of thing that produces safe income for retirees, yet almost half of all the corporate bonds rated by Standard & Poor’s are once again classed as speculative, a polite term for junk.

But there is a resounding call for even more rounds of monetary spirits coming from emerging-market central banks and from local participants, as well. And the new bartender promises to be even more liberal with her libations. This week my friend David Zervos sent out a love letter to Janet Yellen, professing an undying love for the prospect of a Yellen-led Fed and quoting a song from the “Rocky Horror Picture Show,” whose refrain was “Dammit, Janet, I love you.” In his unrequited passion I find an unsettling analysis, if he is even close to the mark. Let’s drop in on his enthusiastic note:

I am truly looking forward to 4 years of “salty” Janet Yellen at the helm of the Fed. And it’s not just the prolonged stream of Jello shots that’s on tap. The most exciting part about having Janet in the seat is her inherent mistrust of market prices and her belief in irrational behaviour processes. There is nothing more valuable to the investment community than a central banker who discounts the value of market expectations. In many ways the extra-dovish surprise in September was a prelude of so much more of what’s to come.

I can imagine a day in 2016 when the unemployment rate is still well above Janet’s NAIRU estimate and the headline inflation rate is above 4 percent. Of course the Fed “models” will still show a big output gap and lots of slack, so Janet will be talking down inflation risks. Markets will be getting nervous about Fed credibility, but her two-year-ahead projection of inflation will have a 2 handle, or who knows, maybe even a 1 handle. Hence, even with house prices up another 10 percent and spoos well above 2100, the “model” will call for continued accommodation!! Bond markets may crack, but Janet will stay the course. BEAUTIFUL!!

Janet will not be bogged down by pesky worries about bubbles or misplaced expectations about inflation. She has a job to do – FILL THE OUTPUT GAP! And if a few asset price jumps or some temporary increases in inflation expectations arise, so be it. For her, these are natural occurrences in “irrational” markets, and they are simply not relevant for “rational” monetary policy makers equipped with the latest saltwater optimal control models.

The antidote to such a boundless love of stimulus is of course Joan McCullough, with her own salty prose:

And the more I see of the destruction of our growth potential … the more convinced I am that it’s gonna’ backfire in spades. Do I still think that we remain good-to-go into year end? At the moment, sporadic envelope testing notwithstanding, the answer is yes. But…..”