The Detroit Lions wide receiver entered Saturday night’s game against the Atlanta Falcons needing 182 yards to break Hall of Famer Jerry Rice’s single-season receiving yards record. Was there ever a doubt he wouldn’t?

With a 26-yard reception from quarterback Matthew Stafford in the fourth quarter, Johnson made history by surpassing Rice’s mark of 1,848 yards set in 1995.

END_OF_DOCUMENT_TOKEN_TO_BE_REPLACED

Mark Sanchez is benched. That’s not a shock. Fifty turnovers in two seasons will do that. What is a shock is that Tim Tebow didn’t get the start and I’m told he isn’t happy about it at all.

Greg McElroy will quarterback the team Sunday, but let’s back up for a moment. When the Jets traded for Tebow, he was informed that he would get a chance to start should something happen to Sanchez (either due to injury or benching). But that hasn’t truly happened and I’m told Tebow feels like the Jets misled him.

END_OF_DOCUMENT_TOKEN_TO_BE_REPLACED

Such a roller-coaster of a game would make any coach sound crazy in their postgame press conference. Luckily for us, it was Coach Miles who reminded us why he is the “Mad Hatter” and the “Most Interesting Coach in the World.”

And just like in those commercials, I’m sure you could make one for Coach Miles that would say, “I don’t always make the right call on fourth down, but when I do, I make sure to make something epic out of it.

END_OF_DOCUMENT_TOKEN_TO_BE_REPLACED 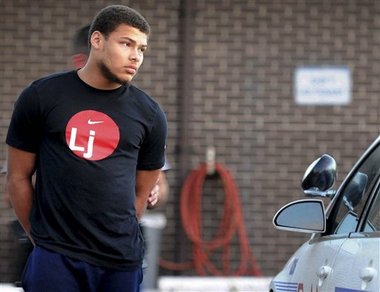 END_OF_DOCUMENT_TOKEN_TO_BE_REPLACED

The Decline and Fall of the Yankees Empire

Nothing heralds the decline of an empire quite like the construction of an expensive new headquarters.

Louis XIV built Versailles after his power had peaked, and before much of Europe united against him. Park Avenue’s Pan Am Building went up not so many years before the iconic company went under. Enron was still completing its postmodern skyscraper in Houston when it filed for bankruptcy in 2001.

All of which brings us to the New York Yankees and their $1.5 billion-plus stadium, baseball’s monument to America’s pre- crash hubris. Entire sections of the ballpark, opened in 2009, sat empty during the opening two games of the American League Championship Series last weekend against the Detroit Tigers. Those fans who did show saved their boos for the home team. “This is a very easy place to play now,” Tigers outfielder Quintin Berry said after Game 2, issuing the ultimate indictment.

END_OF_DOCUMENT_TOKEN_TO_BE_REPLACED

In Monday’s game between the Green Bay Packers and Seattle Seahawks, Seattle faced a 4th-and-10 from the Green Bay 24 with eight seconds remaining in the game.

Seattle quarterback Russell Wilson threw a pass into the end zone. Several players, including Seattle wide receiver Golden Tate and Green Bay safety M.D. Jennings, jumped into the air in an attempt to catch the ball.

While the ball is in the air, Tate can be seen shoving Green Bay cornerback Sam Shields to the ground. This should have been a penalty for offensive pass interference, which would have ended the game. It was not called and is not reviewable in instant replay.

When the players hit the ground in the end zone, the officials determined that both Tate and Jennings had possession of the ball. Under the rule for simultaneous catch, the ball belongs to Tate, the offensive player. The result of the play was a touchdown.

Replay Official Howard Slavin stopped the game for an instant replay review. The aspects of the play that were reviewable included if the ball hit the ground and who had possession of the ball. In the end zone, a ruling of a simultaneous catch is reviewable. That is not the case in the field of play, only in the end zone.

The result of the game is final.

END_OF_DOCUMENT_TOKEN_TO_BE_REPLACED

Mon Sep 3, 2012 2:27am EST Comments Off on Report: USADA in possession of positive Armstrong samples

A reporter from France 2, Nicolas Geay, claimed he had exclusive information from a source, according to which he “could now reveal” that blood samples taken earlier during Armstrong‘s career had been retested under the authority of USADA and “ultimately came back positive”.

USADA is expected to send the final report to the UCI in two weeks time, according to French television, and make it public at the same time in order to put the governing body of the sport under pressure to ratify their life-time ban for Armstrong.

END_OF_DOCUMENT_TOKEN_TO_BE_REPLACED

It is a good question as to why this is so….

urrounded as we are these days by financial malfeasance on such an epic scale, the amount of time and money spent hunting down the facts as to whether former Major League pitcher Roger Clemens and seven-­time Tour de France cycling champ Lance Armstrong took performance-­enhancing drugs to gain an edge is something of a mystery. When an actor gives a cocaine-fueled, Oscar-winning performance, do we take his award away? Do we reclaim a singer’s Grammy, or put an asterisk after it in the record books, when we discover that he was ramped up on illegal substances? Why all the outrage over athletes? The recent Clemens trial involved his alleged perjury before a 2008 congressional committee, when he denied using performance-enhancing drugs. The case consumed more than two years of federal prosecutors’ time, cost the government an estimated $2 million to $3 million, and resulted in an acquittal.

Let’s face it, who among us wouldn’t take a pill or potion that would make us better at our job? Goodness knows, we abuse substances for just about everything in our personal lives; why not in our professional lives as well? Writers, artists, composers, and other practitioners of the lonely arts have historically relied on a trio of little helpers: booze, coffee, and cigarettes. They’re not illegal, but the first one, used in quantity, can certainly kill you. And the last one, if the anti-smoking lobby is to be believed, can kill not just you but those around you as well.

The government’s attitude toward different professions is striking. With sports scandals, it zeros in on individuals. But when it comes to banks, federal authorities go after the institutions—when they go after anything at all. The people at the center of a financial scandal are almost never touched, and most walk away with compensation packages that would make a cable-news anchor or a talk-show host blush.

END_OF_DOCUMENT_TOKEN_TO_BE_REPLACED

The Honey Badger won’t be making an appearance for LSU this fall.

Tigers coach Les Miles announced Friday defensive back Tyrann Mathieu has been dismissed from the team for a violation of team policy.

Mathieu was one of the top playmakers for the Tigers during last year’s undefeated regular season and adopted the Honey Badger moniker as part of his flashy style.

He shined on both defense and kick returns on his way to finishing fifth in the voting for the Heisman Trophy.

Mathieu was suspended for one game against Auburn last season for an undisclosed violation of team rules. Media reports indicated Mathieu failed a drug test.

END_OF_DOCUMENT_TOKEN_TO_BE_REPLACED

You’re looking at a recent photo of Eagle Stadium, in Allen, Texas, a northern suburb of Dallas. The stadium, three years in the works, will seat 18,000 when it opens later this month. It’s got two luxury suites, a pro-quality press box, a 3,400-square-foot HD video scoreboard—and tickets will be just $10 a game for the all-bleacher seating. This is Texas football.

According to Fox Sports Southwest, Eagle Stadium is only the fifth-largest high school field in the state, though that includes an MLS arena, two 1930s WPA projects, and Memorial Stadium in Mesquite, which is shared by five schools. So actual single-purpose prep stadiums don’t get any bigger or nicer than this one.

END_OF_DOCUMENT_TOKEN_TO_BE_REPLACED

Bolt won his second straight Olympic gold medal in the 100 meters with an Olympic-record time of 9.63 seconds.

END_OF_DOCUMENT_TOKEN_TO_BE_REPLACED

LONDON — With its hilariously quirky Olympic opening ceremony, a wild jumble of the celebratory and the fanciful; the conventional and the eccentric; and the frankly off-the-wall, Britain presented itself to the world Friday night as something it has often struggled to express even to itself: a nation secure in its own post-empire identity, whatever that actually is.

END_OF_DOCUMENT_TOKEN_TO_BE_REPLACED

The Joe Paterno statue was removed Sunday morning from its pedestal outside Beaver Stadium, and it will be stored in an unnamed “secure location,” Penn State president Rodney Erickson announced. Erickson also said the Paterno name will remain on the university’s library.

Shortly before dawn in State College, Pa., a work crew installed chain-link fences to barricade access to Porter Road outside Beaver Stadium and covered the fence with a blue tarp.

The work crew then removed the 7-foot, 900-pound bronze statue by forklift and placed it into the lower level of the stadium. Erickson released his highly sensitive decision to the public at 7 a.m. ET Sunday.

Workers lifted the 7-foot-tall statue off its base and used a forklift to move it into Beaver Stadium as the 100 to 150 students watched, some chanting, “We are Penn State.”

The decision came 10 days after a scathing report by former FBI director Louis J. Freeh found that Paterno, with three other top Penn State administrators, had concealed allegations of child sexual abuse made against former defensive coordinator Jerry Sandusky. The Freeh report concluded their motive was to shield the university and its football program from negative publicity.

Meanwhile, the NCAA said that that it would levy “corrective and punitive measures” against Penn State. The organization announced Sunday that it would spell out the sanctions on Monday but disclosed no details.

The Paterno family issued a statement only hours later saying the statue’s removal “does not serve the victims of Jerry Sandusky’s horrible crimes or help heal the Penn State community.”

END_OF_DOCUMENT_TOKEN_TO_BE_REPLACED

Looks like we may be seeing the defining moment in college sports which will hopefully put more power (and money) into the hands of the players and strip it from the universities that exploit them.

(CBS News) CBS News has learned that the NCAA will announce what a high-ranking association source called “unprecedented” penalties against both the Penn State University football team and the school.

“I’ve never seen anything like it,” the source told correspondent Armen Keteyian.

END_OF_DOCUMENT_TOKEN_TO_BE_REPLACED

Time to unfurl Old Glory and break out the red, white and blue boxer shorts.

Four years after China became the first country since 1992 to win more Olympic gold medals than the U.S., The Wall Street Journal’s medal projections for London suggest the Star-Spangled Banner will once again play more often than any other anthem.

And for the fifth consecutive Summer Games, the U.S. should finish atop theoverall medal table.

China’s victory in the gold-medal race in 2008 was supposed to herald the arrival of the newest Olympic superpower, a vast country with 1.3 billion people and a proven government-sponsored training program. Even at the U.S. Olympic Committee headquarters in Colorado Springs, there was a growing sense that China would win the most gold and overall medals in 2012.

END_OF_DOCUMENT_TOKEN_TO_BE_REPLACED

According to Lebron, the team will be nothing if not fast. The 12 man roster is out. See who is on it here.