This slow down may convince China that inflation is easing and that they can loosen monetary policy.

END_OF_DOCUMENT_TOKEN_TO_BE_REPLACED

Thu Nov 3, 2011 7:48am EST Comments Off on Despite a Seventh Record Corn Harvest Demand Can Not Be Met in China

END_OF_DOCUMENT_TOKEN_TO_BE_REPLACED

This flood has no mercy

END_OF_DOCUMENT_TOKEN_TO_BE_REPLACED

Papandreou’s Referendum May Be Cancelled

Thu Nov 3, 2011 7:19am EST Comments Off on Papandreou’s Referendum May Be Cancelled

Speculation is mounting that the referendum may not go through as the Greek ruling party is split over it. This had caused Europe to pare losses and experience retard moves to the upside.

END_OF_DOCUMENT_TOKEN_TO_BE_REPLACED

BREAKING: Vets Injuries from Occupy Oakland Not Caused by Deputies

The Sheriff’s Department said an internal investigation unit is reviewing the incident, but it’s unlikely the identified deputies caused Olsen’s injury. Spokeswoman Eileen Hirst said 35 of the 37 Sheriff’s Department personnel on site for the raid were not carrying projectiles, and the two who were equipped with them did not fire.

On the Matter of the Wealth/Income Gap

Prepared to get schooled

END_OF_DOCUMENT_TOKEN_TO_BE_REPLACED

What is up with fast food violence ?

END_OF_DOCUMENT_TOKEN_TO_BE_REPLACED

A Third Woman Comes Out to Accuse Cain of Sexual Harassment

END_OF_DOCUMENT_TOKEN_TO_BE_REPLACED

That title was a mouthful; but priceless if Wells gets grilled

END_OF_DOCUMENT_TOKEN_TO_BE_REPLACED

Or pay a fine without admitting guilt…..

END_OF_DOCUMENT_TOKEN_TO_BE_REPLACED

China Tightening Has Hurt The Real Economy and Raw Materials

A tug of war between inflation and deflation is being waged by serving ones own interests.

END_OF_DOCUMENT_TOKEN_TO_BE_REPLACED

The Euro Falls 0.7% After The Announcement of Greek Aid Being Withheld

Fuck the Euro and the whole zone of idiots…

END_OF_DOCUMENT_TOKEN_TO_BE_REPLACED

Asia Opens to the Downside

The story behind the downside

END_OF_DOCUMENT_TOKEN_TO_BE_REPLACED

Global Warming is Over, Says Expert 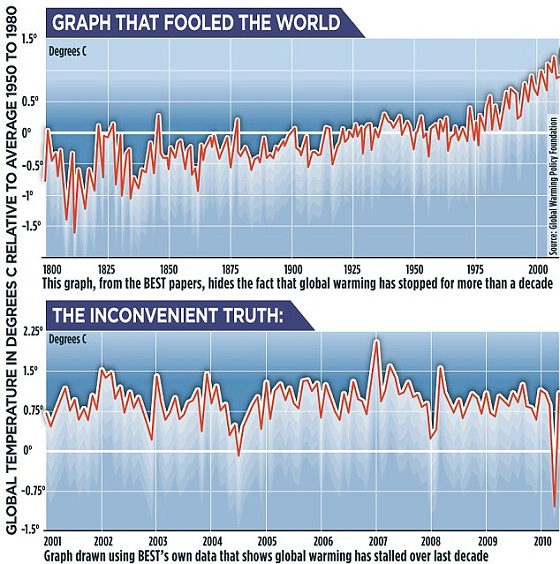 IT’S one of the hottest feuds in science – climate chance zealots insist that we’re still destroying the planet but now another scientist has warned the cast-iron evidence just isn’t there.

FOR a minute there it seemed the global warming debate had finally been resolved.

While for years scientists and sceptics have raged against each other on the crucial topic, new research hailed “the most definitive study into temperature data gathered by weather stations over the past half-century” seemed to come to an authoritative conclusion. Global warming IS real it said, strengthening the need for us all to reduce carbon emissions and boost efforts to try to save the planet.

And this research was headed by a physicist who had previously been a sceptic of global warming and an outspoken critic of the science underpinning it, lending the results even greater credibility. Prof Richard Muller had spent two years trying to discover if the mainstream scientists were wrong but concluded they were right. Temperatures are rising and his results, he concluded, “proved you should not be a sceptic, at least not any longer”. Case closed.

***THE VOICE OF THE CLIMATE CHANGE SCEPTICS***

But is it? Not according to Prof Judith Curry, a member of Prof Muller’s team, who claims the same findings have shown that global warming has stopped – plunging the rest of us into a quandary of what and who to believe. When Prof Curry heard that Prof Muller was saying that the Berkeley Earth Surface Temperature (BEST) findings would put an end to climate change scepticism for good she was horrified. “This isn’t the end of scepticism,” she exclaimed.

“To say that is the biggest mistake he has made. When I saw he was saying that I just thought, ‘Oh my God.’”

Prof Muller, of Berkeley University in California, and Prof Curry, who chairs the Department Of Earth And Atmospheric Sciences at America’s Georgia Institute of Technology, were part of the BEST project that carried out analysis of more than 1.6 billion temperature recordings collected from more than 39,000 weather stations around the world.

Prof Muller appeared on Radio 4’s Today Programme last Friday where he described how BEST’s findings showed that since the Fifties global temperatures had risen by about 1 degree Celsius, a figure which is in line with estimates from Nasa and the Met Office.

When asked whether the rate had stopped over the last 10 years he said they had not. “We see no evidence of it having slowed down,” he replied and a graph issued by the BEST project suggests a continuing and steep increase. But this last point is one which Prof Curry has furiously rebuttted. In a serious clash of scientific experts Prof Curry has accused Prof Muller of trying to “hide the decline in rates of global warming”.

She says that BEST’s research actually shows that there has been no increase in world temperatures for 13 years.

She has called Prof Muller’s comments “a huge mistake” and has said that she now plans to discuss her future on the project with him. “There is no scientific basis for saying that global warming hasn’t stopped,” she says.

“To say that there is detracts from the credibility of the data, which is very unfortunate.” New research also seems to back up Prof Curry rather than Prof Muller. A report published by the Global Warming Foundation, which is based on BEST’s findings, includes a graph of world average temperatures over the past 10 years and it is absolutely flat, suggesting that temperatures have remained constant.

This issue is crucial because the levels of carbon dioxide in the air have continued to rise rapidly over the last decade and if temperatures have remained constant during that period it would suggest there is no direct link between carbon gas emissions and global warming.

Previously carbon dioxide emissions – from the burning of fossil fuels and from deforestation – have been considered one of the biggest causes of climate change, the most damaging effects of which are thought to be the melting of the polar ice caps and the rise in sea levels as well as an increase in extreme weather events such as floods and droughts.

“Whatever it is that is going on here it doesn’t look like it’s being dominated by carbon dioxide,” says Prof Curry.

Prof Muller has made it clear that the BEST study was not conducted in order to gauge the causes of global warming, saying the study “made no assessment on how much of this is due to humans and how much is natural”. He and his scientists – who also included this year’s physics Nobel winner Saul Perlmutter – set out purely to determine once and for all whether climate change had occurred.

The group had been suspicious of previous results which confirmed a rise in global temperatures , believing that their work may have been skewed by the “urban heat island effect” where increasing urbanisation around weather stations was causing the temperature increases recorded over the past 50 years. But their exhaustive research discovered that the urban heat effect could not explain the global temperature increase of about one degree Celsius since 1950.

IT IS well to point out that Prof Curry is not disputing the one degree Celsius increase. She is disputing Prof Muller’s suggestion that temperatures haven’t levelled off in the last decade.

Indeed she says this global warming standstill since the end of the Nineties – which has been completely unexpected – has wide-reaching consequences for the causes of climate change and has already led many climate scientists to start looking at alternative factors that may have contributed to global warming, other than carbon gas emissions. In particular she has mentioned the influence of clouds, natural temperature cycles and solar radiation.

What she also seems furious about is the way that Prof Muller went about publishing BEST’s results without consulting her and before a proper peer review could be carried out. “It is not how I would have played it,” she has said. “I was informed only when I got a group email. I think they have made errors and I distance myself from what they did. It would have been smart to consult me.”

This is, you can be sure, not the last we will hear on the debate.

END_OF_DOCUMENT_TOKEN_TO_BE_REPLACED

FLASH: Futures Fall Off a Cliff

Dow futs are 91 below fair value.

END_OF_DOCUMENT_TOKEN_TO_BE_REPLACED

I think I busted a rib from laughing…

A scathing new expose on the U.N.’s Intergovernmental Panel of Climate Change — which sets the world’s agenda when it comes to the current state of the climate — claims that its reports have often been written by graduate students with little or no experience in their field of study and whose efforts normally might be barely enough to satisfy grad school requirements.

Grad students often co-author scientific papers to help with the laborious task of writing. Such papers are rarely the cornerstone for trillions of dollars worth of government climate funding, however — nor do they win Nobel Peace prizes.

“We’ve been told for the past two decades that ‘the Climate Bible’ was written by the world’s foremost experts,” Canadian journalist Donna Laframboise told FoxNews.com. “But the fact is, you are just not qualified without a doctorate. In academia you aren’t even on the radar at that point.”

The IPCC insists that the lead authors of individual sections of its climate report are indeed the pre-eminent experts in their field.

“These authors are nominated by governments and selected based on expertise,” a spokesman told FoxNews.com. “Author teams on IPCC chapters are a mix of individuals who have excelled in their fields of specialism.”