Generally speaking, when large and mini bubbles in the market pop, the maximum downside resides in the 70% range. We’ve recently seen this play out in May of 2014 with a wide array of tech stocks. We are seeing it unfold now in oil and have seen it play out many, many times in the history of stocks, from dot coms in 2001 to banks in 2008.

The Option Addict texted me an interesting stat this morning, alluding to the last time oil and stocks diverged like this, which was back in 1998. It’s funny that he should mention 1998, since it was the first and only time I thought about leaving the business. Times were so tough for me then, I thought nothing could salvage my young and miserable career as a stocked broker. I recall owning a lot of stock in a company called Gulf Island Fabrication, just before the collapse of oil prices.

Back then, INTC, MSFT and DELL were the darlings of Wall Street; everyone was buying them, GTW (Gateway computers) too. Being a contrarian, I didn’t want to buy tech, so I opted for oil.

Oil went down to drill bits and GIFI descended with it.

Take a look at the pin action. 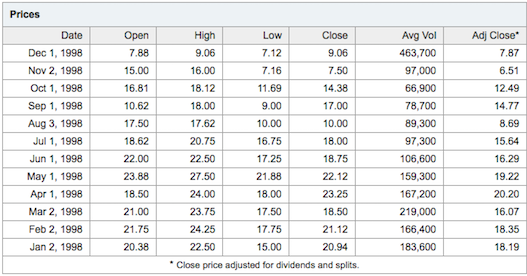 I recall blowing out of GIFI around $15, just before the collapse. I then began a fanatical campaign of buying UNDERPERFORMING dot com stocks. I used to spend hours and hours researching prospective internet companies on the bloomberg terminal. I shared these ideas with my friends and co-workers , who scoffed at me and said “MSFT will own everything”. Hardly anyone even knew about these stocks, like Earthlink, Mindspring, CMGI etc. I was an early adopter. What people know about the dot com era is that people made money. What they don’t know about the dot com era is lots of people lost money.

So in 1998, in the midst of a market meltdown, young Le Fly started to buy dot coms in earnest. My buying power was minuscule, but to me, back then, it was an enormous sum of money. One of the stocks I was buying was ELNK. Have a look at the pin action. 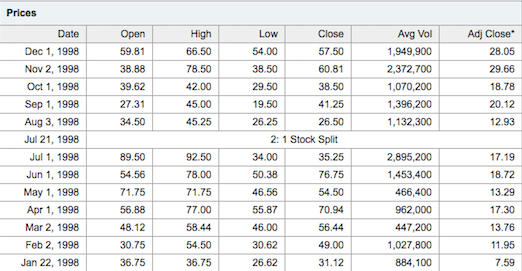 Working with the timeline I am laying out here, I sold out from GIFI around May-June and then I started buying ELNK, BYND, CMGI and others from June on. At first, it was dicey. As you can see by the drop in August, I was hating life to the maximum then, hanging around the office, all depressed and shit, playing Tetris. But then things started to pick up; things started to get real colorful (extra Randy Savage). By November of 1998, I was making a fucking fortune.

As 1999 rolled in, the old school tech names were dead money. I know this is hard to believe, since the NASDAQ was up 100% that year; but they were.

Here is the trading action for INTC that year. 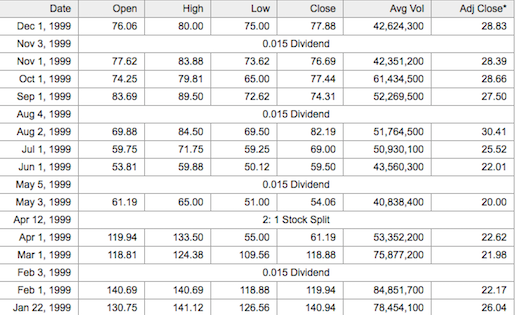 Not impressive. During 1999, all of the assholes who were shitting on me in 1998 were now my cold callers. My production shot through the roof and they couldn’t catch up, mainly because they had no idea where the money was going. I knew it because I had done the homework.

We started buying networking stocks, B2B names and selling out of 2nd tier names like ELNK, who began to underperform, horribly.

Now if you were long ELNK or INTC in 1999, you felt like shit, especially when stocks like JDSU and CIEN were popping off.

Why was this happening? The market in its infinite wisdom concluded the internet was old hat, despite just being invented. Stocks like AMZN, who went from $5 to $30 in 1998, were now acting like old man stocks in 1999. Here was the mediocre performance of AMZN in 1999. 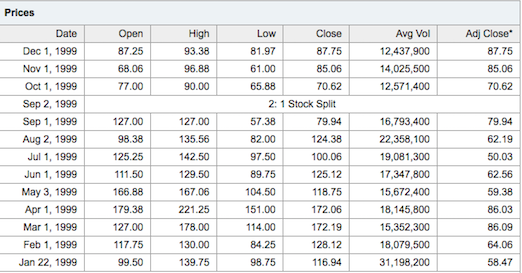 The theory was that the internet was growing. People had computers. Now we needed to speed up the networks, in order to make it work. So, like the railroads in the late 1800’s, America went on a frenzy to build out fiber optic networks. Companies like JDSU and CIEN were at the epicenter of this craze and their shares ran like wild dogs higher. This, of course, was a classic mistake, which led to over-capacity, which led to the eventual collapse of the industry.

In 2000, the party came to an abrupt halt. However, there were stocks that outperformed, like EXTR. 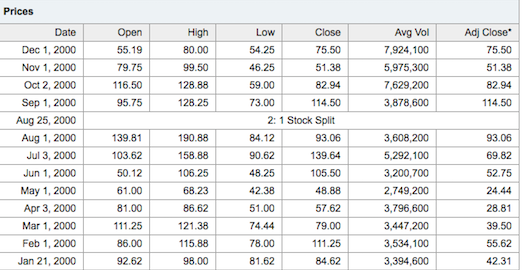 I remember a friend of mine riding that stock from nothing to its peak and right back down. So many people thought these networkers would outperform forever.

Another one of my favorite names was HLIT, another networker. This stock ran from $12 to over $130 in a year–then right back down in 2000.

The party was more or less over. Actually, the party was 100% over and I was inheriting 100 new clients from fired brokers per week, by the spring of 2001.

So what have we learned today, children?

1. When bubbles pop, the downside is your worst nightmare. They do not come back.

2. Pay attention to where the money is flowing, else end up a cold caller for an asshole broker.

4. Before you can book profits, you have to know where to find the waves.

In conclusion, I don’t know for sure if the oil bubble has popped or not. What I see with my eyes is an industry being taken to the woodshed by Wall Street on a daily basis. Perhaps it’s time to buy up the social media or other web 2.0 stocks now, considering oil is done? Or, maybe this is 2000 and everything is going to drop?

Actually, that’s not how it worked back then. See, while everyone was getting blown to smithereens in HLIT back then, people started to make a mint again in my old friend GIFI.

Things work in cycles, people. 2008-2009 was an outlier event, one that saw both oil and stocks collapse in tandem. You and I both know this isn’t happening now. I don’t think we are going to see oil and the rest of the market trade down together. As a matter of fact, if oil continues lower, I believe it will pave the way for extreme upside in a number of high growth industries. Then after those stocks have run their course, you can start buying oil again and dance on the graves of all of those who overstayed their welcome at the party.