Tue Jul 17, 2012 8:00am EST Comments Off on The Finance Minister of South Korea Has Ruled Out Stimulus for the Moment

“South Korean Finance Minister Bahk Jae Wan ruled out additional fiscal stimulus for now, saying it could do more harm than good because the global economy is too weak to make it meaningful.

“You don’t plant a tree in winter,” Bahk said…”

END_OF_DOCUMENT_TOKEN_TO_BE_REPLACED

Oil Trades Higher on Tensions With Iran and Speculation of QE

Tue Jul 17, 2012 7:57am EST Comments Off on Oil Trades Higher on Tensions With Iran and Speculation of QE

Oil rose to its highest point in seven weeks as sanctions on Iran continue and as traders speculate that stimulus will be offered by the clam.

END_OF_DOCUMENT_TOKEN_TO_BE_REPLACED

Tue Jul 17, 2012 7:55am EST Comments Off on Spain Completes a Successful Bond Auction With Yields Falling a Bit

END_OF_DOCUMENT_TOKEN_TO_BE_REPLACED

Global Markets and U.S. Futures Rise a Bit on Speculation the Clam Will Launch QE3

Tue Jul 17, 2012 7:52am EST Comments Off on Global Markets and U.S. Futures Rise a Bit on Speculation the Clam Will Launch QE3

Bernanke will be testifying before congress today and markets are hopeful that some sort of cocaine stimulus injection will be announced.

END_OF_DOCUMENT_TOKEN_TO_BE_REPLACED

Tue Jul 17, 2012 7:48am EST Comments Off on The Greenback Falls for a Third Day Before Today’s Clam Testimony

“The dollar weakened for a third day against the euro amid speculation Federal Reserve Chairman Ben S. Bernanke will hint at additional stimulus when he speaks to Congress about monetary policy starting today.

The U.S. currency fell versus 12 of its 16 major peers after an unexpected decline in retail sales announced yesterday rekindled speculation the Fed will introduce additional steps to support the economy. The Swedish krona strengthened against all its major counterparts after the Riksbank released minutes of its July meeting. Australia’s dollar rose as central-bank minutes said the economy has some “momentum.”

END_OF_DOCUMENT_TOKEN_TO_BE_REPLACED

Despite the End of the World Scenario Playing Out, US and EUROPEAN FUTURES ARE SHARPLY HIGHER

Mon Jul 16, 2012 11:51pm EST Comments Off on Despite the End of the World Scenario Playing Out, US and EUROPEAN FUTURES ARE SHARPLY HIGHER

END_OF_DOCUMENT_TOKEN_TO_BE_REPLACED 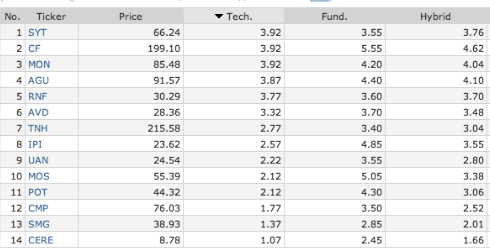 END_OF_DOCUMENT_TOKEN_TO_BE_REPLACED

What LCD Price Fixing Settlement Means For You

NEW YORK (CNNMoney) — For more than eight years, many of the world’s biggest technology manufacturers allegedly colluded to inflate prices for the liquid crystal display (LCD) screens used in televisions, computer monitors, and laptops. Last week, three of them agreed to a $571 million settlement, the latest in a string of deals with payouts that now top $1.1 billion.

Here’s the irony: None of this will actually lower the prices consumers pay for gadgets, analysts predict. LCD prices crashed through the floor in recent years, and price tags have already plunged for items like big-screen TVs.

END_OF_DOCUMENT_TOKEN_TO_BE_REPLACED

CNN) — Most Americans think of the Arctic as an icy, distant place; beautiful, remote and teeming with wildlife, but unrelated to their daily lives. Nothing could be further from the truth.

This summer, big doings on America’s northern doorstep will have enormous consequences to the economic, strategic and environmental future of the nation. Yet we are unprepared for the challenges and opportunities.

What happens in the Arctic as ice melts there could soon cheapen the cost of the gas you buy and products you purchase from Asia. It could help make the nation more energy independent. It could draw our leaders into a conflict over undersea territory. It is already challenging Washington to protect millions of square miles filled with some of the most magnificent wildlife on Earth, and native people whose culture and way of life is at risk as a squall line of development sweeps across the once inaccessible top of the planet.

END_OF_DOCUMENT_TOKEN_TO_BE_REPLACED

Sorry, they just dangled that one out there, like low hanging fruit.

Gay and lesbian consumers prefer fuel-efficient cars, account for 5% of new car purchases and have average household income in the six figures — more than that of heterosexual households, according to a recent marketing survey.

So it’s little surprise that General Motors ran a gay-themed advertisement last month for the Chevrolet Volt, the type of car studies show gay and lesbian consumers tend to like.

END_OF_DOCUMENT_TOKEN_TO_BE_REPLACED

Ritholtz is out with some charts and analysis showing that the recovery from losses is not symmetrical.

See the charts and analysis here.

END_OF_DOCUMENT_TOKEN_TO_BE_REPLACED

A bomb threat has shut down the Ambassador Bridge between Detroit and Windsor tonight, the second time in a week an international crossing between the two cities has been threatened.

The threat came in at 7:22 p.m. to Detroit police and triggered the shutdown, as well as a 1,000-yard security zone around the bridge, said U.S. Coast Guard Lt. Justin Westmiller and Detroit police.

It is unclear when the bridge would reopen.

“The Ambassador Bridge does have information that there was some kind of a threat called in, and it came from the American side,” Alan Upchurch, spokesman for the Detroit International Bridge Company told the Free Press tonight.

END_OF_DOCUMENT_TOKEN_TO_BE_REPLACED

55% of the Country is Under Moderate to Extreme Drought Conditions

WALTONVILLE, Ill. | The nation’s widest drought in decades is spreading, with more than half of the continental United States now in some stage of drought and most of the rest enduring abnormally dry conditions.

Only in the 1930s and the 1950s has a drought covered more land, according to federal figures released Monday. So far, there’s little risk of a Dust Bowl-type catastrophe, but crop losses could mount if rain doesn’t come soon.

In its monthly drought report, the National Climatic Data Center in Asheville, N.C., announced that 55 percent of the country was in a moderate to extreme drought at the end of June. The parched conditions expanded last month in the West, the Great Plains and the Midwest, fueled by the 14th warmest and 10th driest June on record, the report said.

Topsoil has turned dry while “crops, pastures and rangeland have deteriorated at a rate rarely seen in the last 18 years,” the report said.

The percentage of affected land is the largest since December 1956, when 58 percent of the country was covered by drought, and it rivals even some years in the Dust Bowl era of the 1930s, though experts point out that this year’s weather has been milder than that period, and farming practices have been vastly improved since then.

In southern Illinois, Kenny Brummer has lost 800 acres of corn that he grows to feed his 400 head of cattle and 30,000 hogs. Now he’s scrambling to find hundreds of thousands of bushels of replacement feed.

“Where am I going to get that from? You have concerns about it every morning when you wake up,” said Brummer, who farms near Waltonville. “The drought is bad, but that’s just half of the problem on this farm.”

END_OF_DOCUMENT_TOKEN_TO_BE_REPLACED

Milan, July 16, 2012 — Moody’s Investors Service has today downgraded by one to two notches the long-term debt and deposit ratings for 10, and the issuer ratings for 3, Italian financial institutions, prompted by the weakening of the Italian government’s credit profile, as captured by Moody’s downgrade of Italy’s government bond rating to Baa2 from A3 on 13 July 2012. The long-term debt and deposit ratings of one bank were affirmed.

END_OF_DOCUMENT_TOKEN_TO_BE_REPLACED

Gasoline Prices Headed Back Up?

Gasoline futures settled in New York at the highest price in nearly two months, surging over 20 cents in July alone.

Some analysts suggest the slide toward a $3.00 retail gasoline may have permanently stalled. Retail gasoline prices often follow the trend in the futures market within a week or so, analysts say.

The national average for regular self-serve gasoline is $3.40 a gallon, up 2 cents from a week ago, according to AAA.

While a few areas in the Southeast have sub-$3.00 gas, along the East and West Coasts prices are well over $3.50 a gallon.

END_OF_DOCUMENT_TOKEN_TO_BE_REPLACED

More bad news for California’s future retirees: Their pension fund is not growing fast enough to honor its future obligations. And who will make up for the low growth? The Californian tax payer.

The return for the 12 months through June 30 marks the third time in the past five years that it has failed to reach the 7.5 percent threshold needed to meet projected obligations. When Calpers underperforms, the state and its municipalities must make up make up the difference. The state will see its costs rise next year and local governments the following year, the fund said in statement.