The Euro Bounce is Over as We Break Below the 1.25 Level in Relation to the Dollar

Last week the Euro tanked down to 1.22 then had a significant bounce as hopium took over. As the hopium fades due to political folly in Europe the Euro has ended its bounce and is now below 1.25

END_OF_DOCUMENT_TOKEN_TO_BE_REPLACED

Tue Jun 26, 2012 8:39am EST Comments Off on Oil Continues to Show Weakness as Europe Threatens the Global Economy

Brent and WTI showed downside action overnight. Brent has manged to pare losses and is currently up $0.67 while WTI is still down by $0.17.

Other commodities and precious metals have followed suit to the downside.

END_OF_DOCUMENT_TOKEN_TO_BE_REPLACED

Rep. Charlie Rangel, D-N.Y., on Tuesday will face the toughest challenge of his career over the seat he has held for the past 41 years.

The results of the New York Democratic primary could spell the end of Rangel’s storied and controversial career in the House of Representatives. While Rangel, 82, campaigned hard in the remaining weeks of the race, he fought questions of whether past ethics issues and a three-month absence due to a back injury impede his ability to serve in Congress.

State Sen. Adriano Espaillat, 57, poses the biggest threat to Rangel’s bid for a 22nd term with a campaign mantra of “it is time for a change.”

If he wins the primary, Espaillat would likely have a shot at becoming the first Dominican-American member of Congress in history. His campaign also notes this potential milestone in the newly redrawn Harlem district that now holds a majority of Hispanic voters.

The second most competitive challenger is Clyde Williams, 50, a former national political director for the Democratic National Committee. Williams also received boosts after The New York Times and The New York Daily News endorsed him. The incumbent later called the Times endorsement “ridiculous.”

Rangel also tried to cast his campaign as a way to enact President Obama’s agenda — but the White House declined to link itself to the race.

Asked last month if Obama would endorse Rangel, White House Press Secretary Jay Carney told reporters he would “have to get back to you on that.” He didn’t.

It’s not the first time Obama has declined to back Rangel. Shortly before the 2010 censure vote against Rangel over ethics allegations, Obama said Rangel was “somebody who’s at the end of his career.” He went on to say, “I’m sure that what he wants is to be able to end his career with dignity.”

Rangel made history in 2007 when he became the first African-American chairman of the tax-writing House Ways and Means Committee. But he relinquished the gavel three years later after a series of ethics allegations put him under pressure to resign.

END_OF_DOCUMENT_TOKEN_TO_BE_REPLACED

This is going to go down in history as one of the biggest military blunders of all time. Why the hell did Syria attack their neighbor? They were going to be left free to essentially commit genocide with zero consequences. Now, they’re going to get carpet bombed.

ANKARA, Turkey – Turkey said Monday it would push NATO to consider Syria’s downing of a Turkish jet as an attack on the whole military alliance.

The announcement came on the eve of a meeting by NATO’s governing body to discuss the incident. Despite deep frustration among many NATO countries over the conflict in Syria, where the opposition says President Bashar Assad’s crackdown on an increasingly armed popular uprising has killed 14,000 people, it’s highly unlikely the military alliance will take armed action against the Arab state.

The unarmed RF-4E reconnaissance jet was shot down a mile inside international airspace on Friday, and two Turkish pilots are still missing, the Turkish government says. It has insisted the plane was not spying on Syria.

Turkish Deputy Prime Minister Bulent Arinc also said for the first time Monday that Syrian forces had opened ground fire on a CASA search and rescue plane shortly after the downing, but did not say if that plane was hit.

Arinc said Turkey retained its right to “retaliate” against what he called a “hostile act,” but he added, “We have no intention of going at war with anyone.”

The North Atlantic Council — which includes ambassadors of the 28 NATO countries — works by consensus and all members must approve any action. The meeting Tuesday comes after Turkey requested it under Article 4 of the treaty, which allows a NATO ally to request such a consultation if it feels its territorial integrity or security has been threatened.

Asked if Turkey will insist on the activation of Article 5 of NATO, Arinc said, “No doubt, Turkey has made necessary applications with NATO regarding Article 4 and Article 5.”

END_OF_DOCUMENT_TOKEN_TO_BE_REPLACED

(CNN) — Syrian President Bashar al-Assad’s military may have more cracks in its armor as dozens more soldiers, including a general and two colonels, have defected across the border, Turkish media reported Monday.

The 33 army defectors entered Turkey and were sent to a camp in southern Hatay province, the Anadolu news agency said, citing authorities.

Malik el Kurdi, the deputy commander of the rebel Free Syrian Army, speaking to CNN by telephone from the Apaydin refugee camp, said that within the past week a general and three colonels had arrived, but he had not seen a group of more than 30 new deserters.

The refugee camp houses the proclaimed leadership and other members of the FSA, the opposition force made up of Syrian army defectors.

“I receive soldiers daily,” el Kurdi added. “There are rumors, but I haven’t received anyone in that number.”

The defections included a Syrian general and at least four other officers, according to a Turkish Foreign Ministry official and a commander in the Free Syrian Army camp in Turkey.

All were from the Syrian city of Homs, the commander said.

Both officials spoke to CNN on condition of anonymity.

More than 33,000 Syrians have fled to Turkey to escape the violence in their country, Anadolu reported.

END_OF_DOCUMENT_TOKEN_TO_BE_REPLACED

Zanzi said the actor motioned to an area behind his neck, apparently complaining about the label tag of his bathrobe, according to the federal lawsuit first obtained by Courthouse News.

When Zanzi reached for the neck area to help, Travolta shed the robe and “forced his naked person and his erect penis” against the unsuspecting ship worker, the lawsuit states.

“Travolta stated to (Zanzi) that he was beautiful and asked (him) to ‘take me, I will take care of you, please,’” the lawsuit claims.

END_OF_DOCUMENT_TOKEN_TO_BE_REPLACED

The Utica Observer-Dispatch reports that police officers were called to Stanley’s Bar Saturday night to check out a woman described as emotionally disturbed. When an officer approached her, she lunged at him and tried to bite his face. Police say she screamed that she wanted to “kill someone and eat them.”

END_OF_DOCUMENT_TOKEN_TO_BE_REPLACED 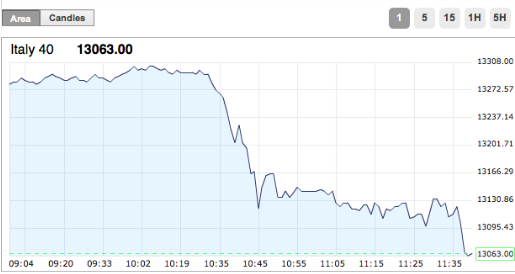 END_OF_DOCUMENT_TOKEN_TO_BE_REPLACED

Education Spending Drops for the First Time Since 1977

The decrease was small, but marks a new turn in education.

END_OF_DOCUMENT_TOKEN_TO_BE_REPLACED

“The stock market has been soft all morning and traders are trying to find support and trying to determine whether or not it will hold up this Monday. We are tracking the daily buy/sell pivot points on the SPDR S&P 500 (AMEX: SPY) as the most liquid equity ETF on the market to help traders and investors avoid buying at the wrong time or shorting just before a intraday rally.”

END_OF_DOCUMENT_TOKEN_TO_BE_REPLACED

The Dallas Fed is Out With the June Manufacturing Report

Mon Jun 25, 2012 11:42am EST Comments Off on The Dallas Fed is Out With the June Manufacturing Report

“The Federal Reserve Bank of Dallas has released its report for manufacturing activity in the month of June.  Some regions are seeing continued slowing growth, but the Dallas Fed district went up back into positive territory in June from a contraction in May.  The general activity index rose to 5.8 in June from -5.1 in May.”

END_OF_DOCUMENT_TOKEN_TO_BE_REPLACED

European Markets Shit the Bed Into the Closing Bell

Spain is down 3.4% after Merkel gave some commentary that makes it appear they will be less than helpful to resolve the debt crisis.

END_OF_DOCUMENT_TOKEN_TO_BE_REPLACED 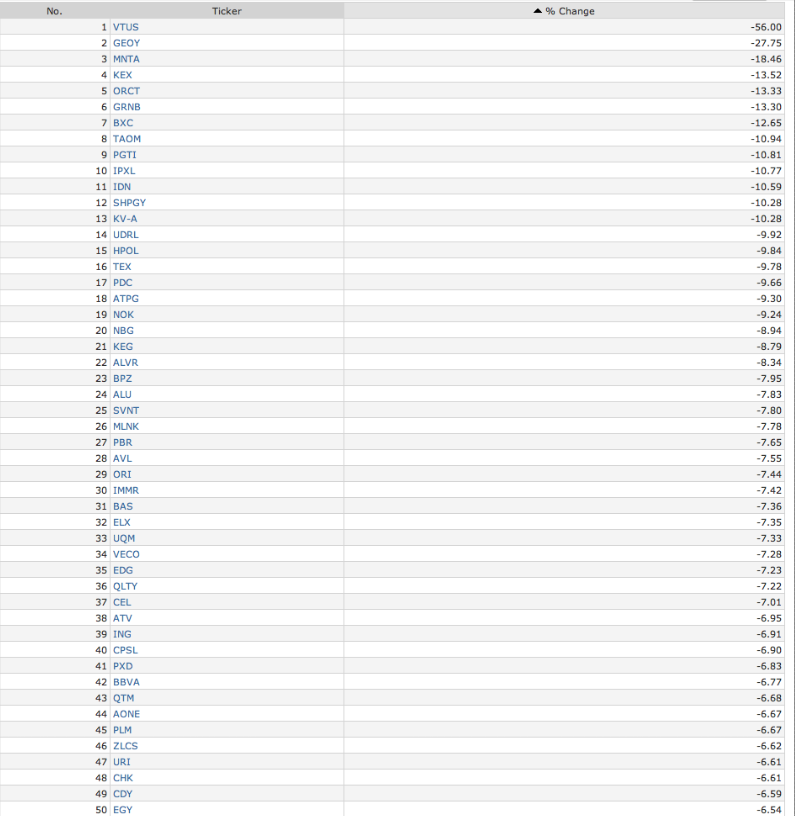 END_OF_DOCUMENT_TOKEN_TO_BE_REPLACED

Nerd Alert: Atlanta Fed Compares the Present to Crisis of 1763!

We’re fucked. These people are imbeciles.

In August 1763, northern Europe experienced a financial crisis with numerous parallels to the 2008 Lehman Brothers episode. The 1763 crisis was sparked by the failure of a major provider of acceptance loans, a form of securitized credit resembling modern asset-backed commercial paper. The central bank at the hub of the crisis, the Bank of Amsterdam, responded by broadening the range of acceptable collateral for its repo transactions. Analysis of archival data shows that this emergency source of liquidity helped to contain the effects of the crisis, by preventing the collapse of at least two other major securitizers. While the underlying themes seem to have changed little in 250 years, the modest scope of the 1763 liquidity intervention, together with the lightly regulated nature of the eighteenth century financial landscape, provide some informative contrasts with events of late 2008.

(working paper link not working yet)