Fear, Uncertainty and Doubt (FUD) surround new markets, assets and commodities. This is especially true for cryptocurrency. Empirical analysis can cut through FUD and blatant lies. One piece of information that stands out at the moment is this: 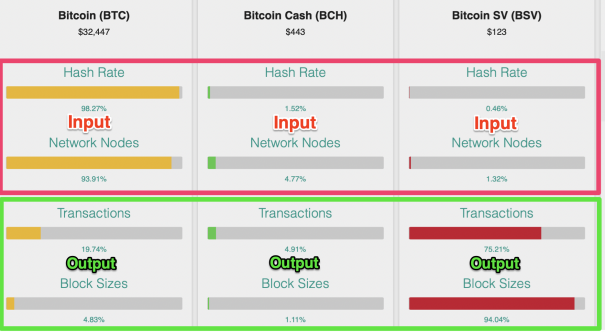 In the three vertical columns we see BTC, BCH and BSV. These are the three SHA256 coins laying claim to being Bitcoin. BTC, BCH and BSV share the same hashing algorithm and therefore draw from the same pool of available mining resources. In other words, they compete for the available SHA256 hashing power.

The first two bars, Hash Rate and Network Nodes, indicate the inputs required to drive these networks. Think of it like a breakdown of how much SHA256 hash each network is running out of the total available sha256 hash. Network Nodes measures how many nodes are running the software for each coin. (The Nodes are debatable as a useful metric but that’s a topic for a separate post.)

You can see that BTC hash dominates at 98% of the total being used between the three coins. That’s a lot of energy and resources. This could be expected as Hash follows Price. Miners are pursuing profit and due to the dislocation in price with BTC the miners mine the most profitable coin (but not the most efficient).

If the top two bars are the coins inputs (the resources needed to drive the network) and the bottom two are the outputs (the production of these coins) we start to see An Inconvenient Truth for BTC fans. BTC consumes 98% of the hash but produces 20% of the transactions and only 5% fo the block size compared to BSV. BSV is vastly more efficient. BSV produces far most outputs with much less inputs, and it’s likely to get worse for BTC.

BSV is aggressively scaling the network while BTC remains stuck at 1MB. The future plans are for BSV to scale to Gigabyte and then Terabyte blocks. This would be 1,000x and 1,000,000x the capacity of BTC’s 1MB block limit. Ooof, for BTC holders that is inconvenient.

And the BSV network will get stronger as more transactions creates more incentives for miners. Meanwhile BTC’s plans to scale off chain weakens the network and moves fees from miners to trusted third parties.

This matters because the subsidy miners receive for mining blocks on the three networks will be cut in half again around mid 2024. The original design of Bitcoin is that fees from transaction volume would replace the diminishing block subsidy. BSV is on that path. BTC is not. This is a truth BTC does not want to face.

The data below shows the comparison in fees and miner profitability for BSV vs BTC. BTC fees have been as much as 100,000x more expensive. Incredible! Miner profitability varies often and usually favors BTC. This could change as BSV transaction volumes increase. 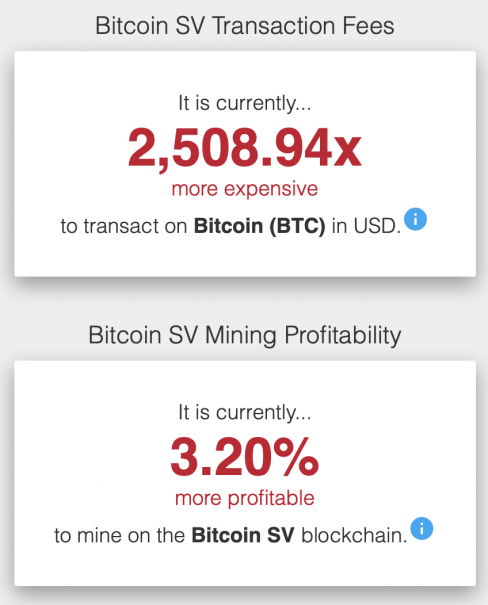 This has been a very slow road. I posted about this eventuality in December 2019. Maybe by end of year we’ll see the market catch up to these realities.

BSV now producing 60% of the transactions and 60% of blocksize when compared to BCH and BTC.

What will they say when BSV produces 70%?

And then 99% as BSV scales and the others do not. pic.twitter.com/dzDI0x0QYN

Most geniuses are rarely appreciated in their own lifetime. The magnitude of their genius only recognized once the full impact is realized, which often takes decades. Another fact that is lesser known, many geniuses are assholes. You need look no further than Sir Isaac Newton for an example.

Dr Craig Wright, the Chief Scientist of nChain, fits the asshole genius description well. Dr Wright, when crossed, is a world class jerk and this character flaw may have been very costly during the past week’s events. Much like Isaac Newton, Dr Wright, “when angered, he became unbalanced and, it must be said, vindictive and petty.”

Far be it for me to write a prescription for how anyone “should” act. Dr Wright has endured more personal attacks than anyone in this space and to his credit he’s weathered them well. I will note however that we each establish a track record for ourselves through our words and our actions and Dr Wright, while an undeniable genius, has an abysmal track record for honoring his word. An Inconvenient Truth for BSV is that Dr Wright’s failure or inability to make good on several claims regarding his disposition of 800,000+ BTC in 2020 has been a dark cloud over his credibility and the credibility of any project he attaches to, namely BSV.

Many people will point to pending lawsuits and larger machinations around securing patents as a defense for the delays. Maybe, but this remains An Inconvenient Truth nonetheless.

Even if Dr Wright never follows through on these statements I see a bright future for BSV. I cannot say the same for BTC and it’s broken economics. If I had to weigh the Inconvenient Truths against each other, I’ll take BSV every time.

So, I remain as always, irresponsibly allocated.