Asian Markets Lower, But Not Crashing

The Japanese markets have stabilized and trading off the lows, but still swimming in shit, down 2.1%. Hong Kong is down 1.97% and China is off by 0.4%, where they are too busy concocting off balance sheet accounting frauds than pay heed to global news.

Related: oil, gold and silver are all lower, but food commodities are ripping to the upside.

END_OF_DOCUMENT_TOKEN_TO_BE_REPLACED

Although minuscule, UN scientists are predicting a radioactive plume will touch down on southern California by Friday, just in time for tea and crumpets with none other Howard Lindzon.

Get your fucking face masks ready.

END_OF_DOCUMENT_TOKEN_TO_BE_REPLACED

Based on a press release from the Japanese Chief Cabinet Secretary dated 16 March 2011, the IAEA can confirm the following information about human injuries or contamination at the Fukushima Daiichi nuclear power plant.

Please note that this list provides a snapshot of the latest information made available to the IAEA by Japanese authorities. Given the fluid situation at the plant, this information is subject to change.

Radiological Contamination
17 people (9 TEPCO employees, 8 subcontractor employees) suffered from deposition of radioactive material to their faces, but were not taken to the hospital because of low levels of exposure
One worker suffered from significant exposure during ‘vent work,’ and was transported to an offsite center
2 policemen who were exposed to radiation were decontaminated
Firemen who were exposed to radiation are under investigation

END_OF_DOCUMENT_TOKEN_TO_BE_REPLACED

In an effort to stem the free flow of radiactive stream flowing from nuke bomb plant #3, Japanese officials have resorted to dropping water out of helicopters onto the plant.

Related: uranium was down 6%+ today on news that Germany and China were shutting down or canceling numerous nuclear power plant projects.

END_OF_DOCUMENT_TOKEN_TO_BE_REPLACED

Trading is underway in Japan and it is ugly as fuck, with outsized losses in just about everything

Related: the yen is up 1% versus the dollar, giving back most of the early/scary gains.

END_OF_DOCUMENT_TOKEN_TO_BE_REPLACED

After hours currency action has been pure wild west or middle east, whichever you deem wilder. By 5:30 est., the USD/JPY cross was trading as low as 76. Since then it has rallied up to 78.7, still down 2.3% on the session. The yen is also weakening versus the pound and the euro, but still up 4.2% and 3.8% respectively. 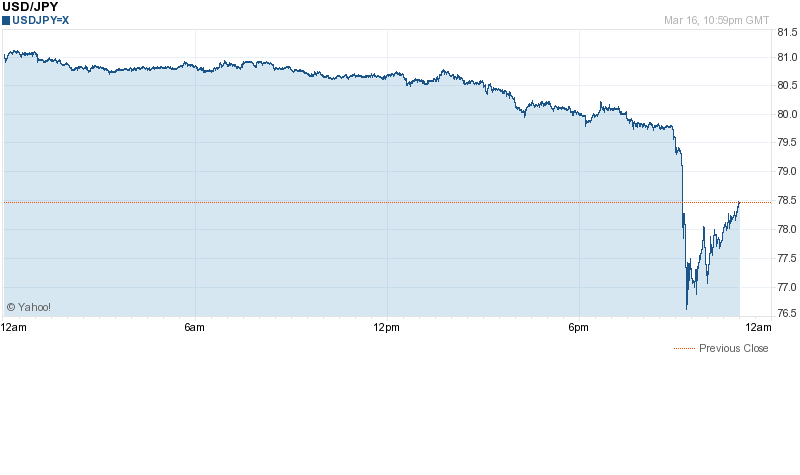 NIKKEI futures, 30 minutes ahead of trade, are indicating a loss 1.9%, up from earlier indications of -4.5%.

END_OF_DOCUMENT_TOKEN_TO_BE_REPLACED

As per the U.S. Embassy in Tokyo, they are calling for an evacuation of U.S. citizens within an 80km radius of nuke sites.

The United States Nuclear Regulatory Commission (NRC), the Department of Energy and other technical experts in the U.S. Government have reviewed the scientific and technical information they have collected from assets in country, as well as what the Government of Japan has disseminated, in response to the deteriorating situation at the Fukushima Nuclear Power Plant. Consistent with the NRC guidelines that apply to such a situation in the United States, we are recommending, as a precaution, that American citizens who live within 50 miles (80 kilometers) of the Fukushima Nuclear Power Plant evacuate the area or to take shelter indoors if safe evacuation is not practical.

END_OF_DOCUMENT_TOKEN_TO_BE_REPLACED

Per their Facebook page (how fucking retarded), the IAEA said the following:

Given the intense heat and radiation that spent fuel assemblies can generate, spent fuel pools must be constantly checked for water level and temperature. If fuel is no longer covered by water or temperatures reach a boiling point, fuel can become exposed and create a risk of radioactive release. The concern about the spent fuel pools at Fukushima Daiichi is that sources of power to cool the pools may have been compromised.

The IAEA can confirm the following information regarding the temperatures of the spent nuclear fuel pools at Units 4, 5 and 6 at Fukushima Daiichi nuclear power plant:

The IAEA is continuing to seek further information about the water levels, temperature and condition of all spent fuel pool facilities at the Fukushima Daiichi nuclear power plant.

END_OF_DOCUMENT_TOKEN_TO_BE_REPLACED

With the Yen going “full retard” versus the dollar and euro in after hours trade, NIKKEI futures are plummeting, now indicating a drop of 4.55%.

In after hours trade, the Yen is up more than 4% versus the dollar and 6% versus the euro.

END_OF_DOCUMENT_TOKEN_TO_BE_REPLACED

Dollar and Euro Cratering Versus Yen

Even though Japan will need to borrow billions upon billions for rebuilding efforts, the yen is hitting new highs against the dollar. It’s been rumored that Japan will repatriate money invested overseas. It’s worth mentioning this serves as a double hammer to the face and guts to Japanese exporters, already dealing with supply chain disruptions. Essentially, the dollar/yen cross, via some sort of epic short squeeze, is adding insult to injury and may be the straw that breaks the Bank of Japan’s back.

At the moment, the dollar is cratering versus the yen, down 4% for the day. The Euro is now down 5.6% versus Yen. 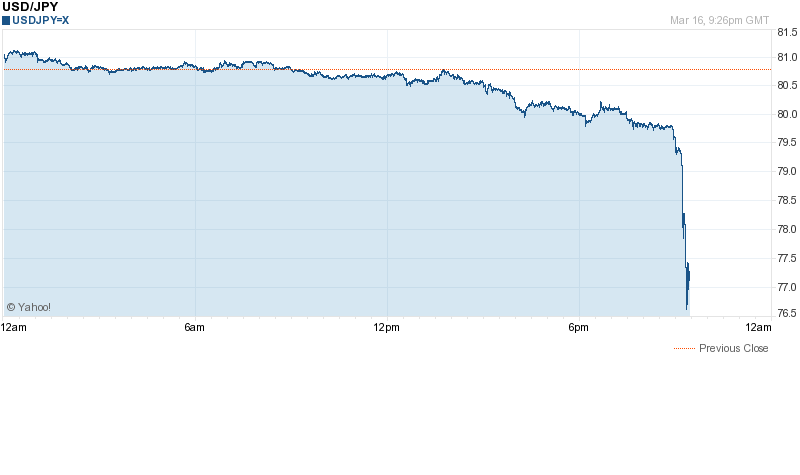 Japanese futures are indicating down 1.7%.

END_OF_DOCUMENT_TOKEN_TO_BE_REPLACED

Foreign governments are warning its citizens to leave Tokyo. This includes France, U.K. and Australia. However, oddly enough, the United States has not made such statements.

The French Foreign minister is quoted as saying “Let’s not beat about the bush, they’ve essentially lost control.”

U.S. Ambassador to Japan, Mr. Roos, said: ‘The United States will continue to make its judgement (on whether citizens should leave), which is based on the primary importance of the health and safety of the American citizens in Japan. ‘That will continue to be our number-one objective, and we will do anything we feel necessary in order to protect their health and safety.”

END_OF_DOCUMENT_TOKEN_TO_BE_REPLACED

The EPA said: “work with its federal partners to deploy additional monitoring capabilities to parts of the western U.S. and U.S. territories.”

The monitors will be checking air, water, milk and precipitation quality for dangerous radiation levels.

Monitors are also being sent to Guam and the Aleutian Islands.

END_OF_DOCUMENT_TOKEN_TO_BE_REPLACED

Despite the market turmoil, generally, the refiners are unscathed to up.

END_OF_DOCUMENT_TOKEN_TO_BE_REPLACED

In light of the crisis in Japan, following Germany’s move to shut down 7 nuke plants, China has decided to suspend 28 nuclear power plants projects.

The 28 projects in China represents 40% of total worldwide projects.

Note: not good for uranium stocks

END_OF_DOCUMENT_TOKEN_TO_BE_REPLACED

Stocks Down, Bonds Up

The dollar is strong too.

TLT is up almost 2% in early trade.

END_OF_DOCUMENT_TOKEN_TO_BE_REPLACED

Radioactive Contamination Not Covered by Insurance

The tab will be entirely on the Japanese government.

When insurers say a risk is uninsurable, it means the government will end up picking up the tab. Since the 1950s, to protect their solvency from the potential effect of having to pay full policy limits under every contract, insurers have excluded radioactive contamination from those classes where it was deemed uninsurable. The radioactive contamination of third party property is not insurable by conventional means, nor are attacks with nuclear weapons … The governments provide compensation (e.g. Chernobyl). The amounts involved have exceeded many times over the capacity of the nuclear insurance industry, which confirms that the decision to exclude it was the right one.

END_OF_DOCUMENT_TOKEN_TO_BE_REPLACED

They feel the good news is baked in.

END_OF_DOCUMENT_TOKEN_TO_BE_REPLACED

More Than 200 Injured in Bahrain Clashes

Their markets are closed too, due to declared state of emergency.

Our good friends, Saudi Arabia, are likely shooting protestors in the face. However, Exxon Mobile said they were good guys, so nothing to see here.