Due to the recent developments abroad, NYMEX crack spreads are at their highest levels since May of 2007, now above $25. As a result, refinery related stocks have been very strong. However, it’s worth noting, they are all considerably off the highs reached back in 2007.

Year to date, crack spreads are up more than 60%. In other words, refiners are minting money right now.

END_OF_DOCUMENT_TOKEN_TO_BE_REPLACED

Japanese officials have decided to finally tell the truth, disclosing the fuel rods inside all three troubled reactors may be melting down.

END_OF_DOCUMENT_TOKEN_TO_BE_REPLACED

Alternative energy related names are being bid up this morning, based upon speculation that countries will shy away from nuclear power, post Fukushima.

Data provided by The PPT.

END_OF_DOCUMENT_TOKEN_TO_BE_REPLACED

Data provided by The PPT.

END_OF_DOCUMENT_TOKEN_TO_BE_REPLACED

With 12 factories closed in Japan, Goldman is estimating that Toyota, TM, will lose $72 million in profit per day, based upon current burn rate.

END_OF_DOCUMENT_TOKEN_TO_BE_REPLACED

I am sure the prospect of QE3 is on the minds of all of those who manage money.

The Shanghai, Heng Seng, Seoul and KLSE have all reversed higher, while the Sensex is surging, now up close to 1%. Fair value for the S&P futures are now down less than 4.

END_OF_DOCUMENT_TOKEN_TO_BE_REPLACED

Gasoil (diesel) margins have erupted to the upside, now at the highest point in 2 1/2 years. The spread to Dubai crude rose to 12% or $22.15 in early Asian trading, based upon the fact that Japanese power companies will need to use alternatives to nuclear to fill power gaps. 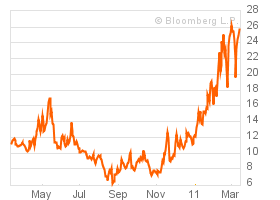 END_OF_DOCUMENT_TOKEN_TO_BE_REPLACED

Shares of the largest Korean steel maker, Posco, are up more than 6% in early trading, on the prospects of massive rebuilding efforts in Northeast Japan. Similarly, Japanese construction stocks are soaring, led by gains in Sumitomo Mitsui up more than 42%.

END_OF_DOCUMENT_TOKEN_TO_BE_REPLACED

Following a series of explosions at Fukushima plant #3, officials are warning that a meltdown is now possible.

Due to the need to rebuild, investors are tripping over themselves, halfway stupid, buying up construction related stocks in Japan.

END_OF_DOCUMENT_TOKEN_TO_BE_REPLACED

The broader Topix is down more than 6% now, as investors sell amidst uncertainty. Toyota, Honda and many other big manufacturing companies are down mid to high double digits, due to plant closings.Some stocks, like refiners, uranium and select electronics are down mid double digits to as much as 30%. Sony has shut down 8 factories, as the Northeast part of Japan, currently afflicted by the aftermath of the quake, is vital for Japanese industry being a main hub for supplies.

Conversely, construction stocks are very strong, based on the necessity of rebuild vast parts of Northeast Japan.
Here are recent quotes, with links, to some of Japan’s biggest companies. 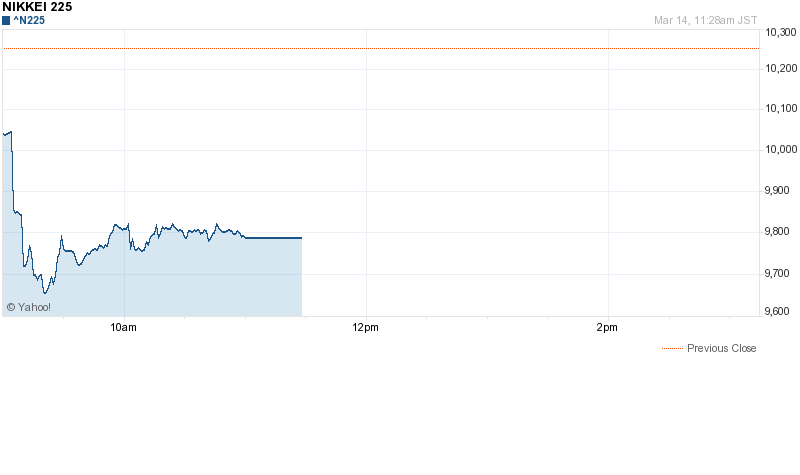 Right now exchanges are closed during lunch. And, it’s worth noting, they are off the lows.

END_OF_DOCUMENT_TOKEN_TO_BE_REPLACED

It’s being reported that gasoline lines are “being formed around the block” around Tokyo. As of latest reports, more than 1/3rd of Japan’s crude refineries are offline. Furthermore, as you could imagine, people are buying up basic necessities: rice, pasta, water and other staples. Shortages of all kinds are being reported, as residents stockpile and plan for the worst.

END_OF_DOCUMENT_TOKEN_TO_BE_REPLACED

An explosion has been reported at Fukushima Daiichi unit #3. Residents, if not evacuated, are being advised to stay indoors. They’ve been trying to cool this plant down with sea water. However, earlier on today the pumps began to malfunction, making it difficult if not impossible to discern whether it was being cooled.

As of now, all residents within a 20 kilometer radius have been ordered to evacuate.

UPDATE: 7 employees of TEPCO are missing and 6 injured.

The EU, after 8 hours of debates, agreed to expand its bailout facility, allowing for $611 billion to be spent on buying bonds directly from member states.

A deal was not expected until March 24-25th, so this may be viewed favorably when markets open on Monday.

END_OF_DOCUMENT_TOKEN_TO_BE_REPLACED 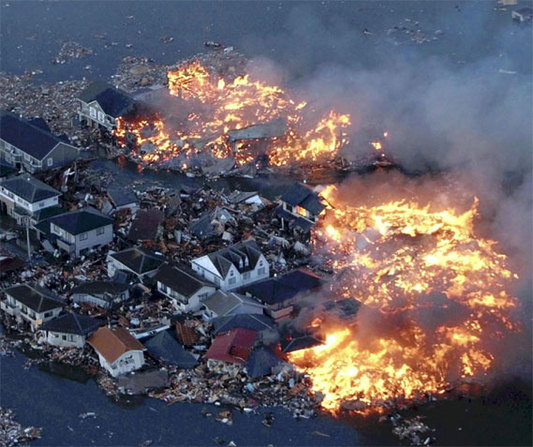 END_OF_DOCUMENT_TOKEN_TO_BE_REPLACED

In an effort to avoid meltdown, they are now flooding the reactor at Fukushima with sea water. Although officials are downplaying the seriousness of the recent events at Fukushima, they have ordered an evacuation of all people within a 12 mile radius.

In addition to sea water, the people at Tokyo Electron are adding boric acid to the concoction, in order to disrupt the nuclear chain reaction.

END_OF_DOCUMENT_TOKEN_TO_BE_REPLACED

Via the IAEI, the cooling systems at a second nuke plant, Fukushima unit #3, are not working. Thus far, over 140,000 people have been or ordered to have been evacuated.

It’s also being reported that at least 9 people at Fukushima have been exposed to dangerous levels of radiation.

END_OF_DOCUMENT_TOKEN_TO_BE_REPLACED

Residents near plant advised to avoid tap water and to cover faces with wet towels. Evacuations are underway for a 20 kilometer radius near Fukushima.

END_OF_DOCUMENT_TOKEN_TO_BE_REPLACED

Sat Mar 12, 2011 1:10am EST Comments Off on Flash: High Probability of Nuclear Meltdown at Fukushima

This is getting real grim too fast.

The Kyodo newswire is very slow to respond, due to the overwhelming amount of traffic they are receiving. However, from what I can gather, it looks like the situation at Fukushima Daiichi power plant’s Unit 1 is deteriorating. It’s being reported that part of the core may be “melting down.” I loathe people who ring alarms for the sake of garnering attention. However, logic dictates the Japanese officials would not be making statements like this, unless they felt a melt-down was a real possibility.

In the event of a meltdown, the affected area would be at least 5 kilometers.

Here is a helpful twitter feed to keep up to date with developments as they progress.