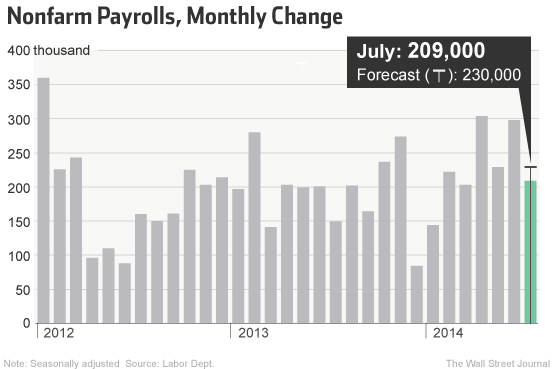 WASHINGTON—Hiring by U.S. employers slowed in July but remained robust with broad-based payroll gains, evidence of continued strength in the labor market and the broader economy.

The unemployment rate, obtained via a separate survey of households, ticked up to a seasonally adjusted 6.2% in July from 6.1% in June. The jobless rate has fallen 1.1 percentage points since July 2013, when it was 7.3%.

Economists surveyed by The Wall Street Journal had expected payrolls to rise by a more robust 230,000 and the jobless rate to remain at 6.1%.

July’s gain extended a streak that has seen nonfarm employers add 200,000 or more jobs in six consecutive months for the first time since 1997.

The U.S. economy stumbled in the wintry first quarter as gross domestic product-—the broadest measure of output across the economy—contracted at a 2.1% seasonally adjusted annual rate. But growth rebounded in the second quarter, with GDP growing at a 4% pace as companies continued to hire workers and the jobless rate declined at a rapid pace.

The Federal Reserve on Wednesday acknowledged improvement in the labor market. But its policy statement warned that “a range of labor market indicators suggests that there remains significant underutilization of labor resources,” and that “a highly accommodative stance of monetary policy remains appropriate” given the state of the economy.

The Fed has kept short-term interest rates near zero since December 2008 to bolster the U.S. economy through a financial crisis, a deep recession and a lackluster recovery. The central bank now is winding down its bond-buying program and officials expect to begin raising rates sometime next year, though Chairwoman Janet Yellen in mid-July said that rate hikes “likely would occur sooner and be more rapid than currently envisioned” if the labor market “continues to improve more quickly than anticipated.”

In July, hiring was broad-based. Payrolls rose in the professional and business services, manufacturing, retail, construction and public sectors….”