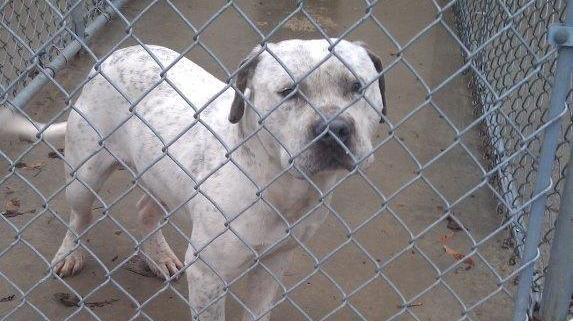 The male American bulldog mix pictured above faced euthanization at Jackson Rabies Control Animal Shelter in Tennessee on Thursday, after his owner saw him mounting another male dog, assumed he was gay, and turned him in.

A Facebook user, under the name “Jackson Madison Rabies Control Stalker,” often visits the kill shelter looking for dogs to advertise for adoption. The 39-year-old mother and animal lover featured this unwanted dog on her page, in a post that received more than 4,200 shares and 1,405 comments overnight.

This guy was signed over to RC, not bc he’s mean or bc he tears things up, but because… His owner says he’s gay! He hunched another male dog so his owner threw him away bc he refuses to have a “gay” dog! Even if that weren’t the most assinine [sic] thing I’ve ever heard, its still discrimination! Don’t let this gorgeous dog die bc his owner is ignorant of normal dog behavior! He’s in kennel 10L and he WILL be put down tomorrow bc there is no room at the inn!
What the owner of the dog obviously didn’t know, as The Atlantic Wire points out, is that dogs “often mount each other to show dominance.”

If you enjoy the content at iBankCoin, please follow us on Twitter
2013-01-31
Dr. Fly
Share
Previous Calling Out the War Loving Left
Next Corruption, Payoffs, and Tax Evasion is All But a Days Work for Spanish Government