Review site Yelp Inc. is allowing users to order food online for delivery and pickup, partnering with businesses such as Eat24 and Delivery.com.

The offering, called Yelp Platform, can be accessed on desktop computers and mobile gadgets, the San Francisco company said in a blog post Tuesday.

Yelp also said Tuesday that it will eventually roll out a scheduling program for appointments at yoga studios, salons, spas and dentist offices. To do so, it plans to pair with brands such as Booker, Demandforce and MindBody.

I regret selling Yelp. This is one of those press releases that will be forgotten in a few days or weeks, then permeate greatness into the company for years, similar to the day Apple announced iTunes. Yelp is going to kill this business. They’re gonna be the iTunes of the takeout business. I can’t think of a social media stock that is killing it like Yelp, not ANGI, TRIP or Z– and I love them all. 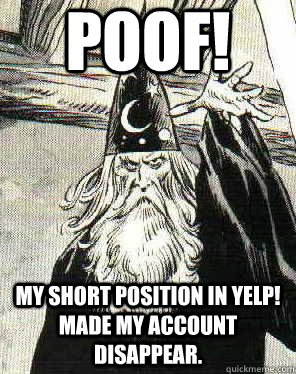 I need to buy it back. I am going to stalk this stock like a creepy serial killer hiding in the shrubs.