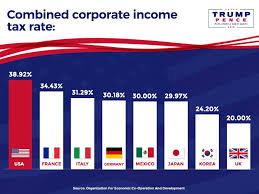 Corporate tax policy is very important for global investors, for obvious reasons. Trump’s first full week in the big chair is a good time to remind people of what the potential drivers are for relative valuation going forward. The topic of tax has come up already today, “We will cut taxes massively”, “We are going to impose a very large border tax”.

As a non-American, I can analyze such matters with a degree of detachment. It appears difficult for Americans to move on and accept that the card have been dealt, played, and that the spoils will be split with a different calculus than we observed under previous administrations.

A great deal of Trump’s campaign dealt with “Making America Great Again” and clearly on tax policy there is some wood to chop. To a man with a hammer, everything is a nail, and with the mandate Trump has been given, change is coming, hard and fast. Much of the focus to date has been on the timing, rate and window to be provided for US corporations to repatriate the offshore profits they have been hoarding outside of the grasp of the US Treasury. The headline bounty is large, estimated at between $1.7-2.3 trillion (dwarfing even China’s UST holdings to scale it!). The effect on the US dollar will overall be muted though, as the bulk of the offshore cash is already denominated in US dollars (brought back to the USA, less the TBD tithe of the US Treasury). Much of this liquidity has been invested conservatively as it was in many cases earmarked as dry powder for acquisitions, stock buybacks, etc. The ebullient debt markets have allowed this to be effected with ease by many corporate treasurers (onshore debt, offshore cash). Some form of tax “holiday” / amnesty program will see a goodly portion of the excess cash brought back onshore, given the new found flexibility afforded and concerns over such a pass ever being granted again (at least in the near future).

The big thing to watch with be the form of a “Border Adjustment Tax” (BAT), aka “Destination Based Cash Flow Tax” (DBCFT) that comes out of the other end of the corporate tax code transformation. This is much more complex than the disclosed plans on the individual taxation side (i.e. less complexity, less brackets, fewer loopholes, lower net taxes). Many of the USA’s trading partners have much lower corporate tax rates with many having fallen upwards of 10% over the last decade. Canada’s Federal corporate tax rare is 26.5%, down from 36.1% in 2006. Mnuchin (I’d like to buy an “i” for $500 Alex), Secretary of Treasury nominee, has already stated that a corporate tax cut is the biggest/best fix for corporate tax inversions, a topical M&A driver in recent years.

Robert Lighthizer, Trump’s pick for U.S. Trade Representative, has been critical of the abuses seen under varied free trade agreements. The US has pulled the plug on TPP, as expected. Trade partners due South and North have been put on notice that NAFTA is to be heavily reworked (Canada first up it appears as we have no wall issue o/s). Trump has already announced a “Border Tax” which would be troublesome to effect, given the presence of the WTO and others. Odds of Trump’s chest pumping border tax being a modified version of the EU’s 15-27% border adjusted VAT is high. The optics of such a plan are without precedent in the US, but  fit well with Trump’s stated objectives. It would the first time the US has imposed an internal tax on imported goods with an explicit rebate/exemption for exports. Such an innovative tax regime would also have merit from a budgetary perspective as addition taxes would be raised for the US Treasury, given the long standing net trade deficit the US typically runs.

USD strength would result under such a DBCFT plan. Tax policy watching could be more fruitful than Fed watching near term. The Fed die appears to be cast, at least over a 12-18 month time frame. The flames Trump provides oxygen to will likely quicken the pace of Fed Funds hikes upward march in the near term (an extra 25bp in 2017 over expectations and perhaps 50bp in 2018). King USD. Future posts will address the likely stress on EM bonds markets where US$3tln of incremental bonds have been issued since 2008. Higher absolute rate markets, steeper rate curves and challenged EM currencies will make for spirited trade indeed.

Effected a family move to Tokyo, Japan over the holidays, but expect to more active going forward. JCG