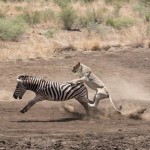 Previous 2016: Year of the Fire Monkey
Next O’ CANADA – WE’RE GOING TO NEED A BIGGER GUN